It is desert season, time to drive through empty land in the long nights, then spend the short days fending off spines. I don’t particularly enjoy solo desert trips, so I was thankful that Mike was willing to humor me and tag along for a few southern Arizona peaks. I had chosen a grab-bag of ultra-prominence peaks and scrambly desert peaks; first up was Chiricahua, an unremarkable “ultra” near the more remarkable Chiricahua National Monument, southeast of Tucson.

We got a dawn start, taking Mike’s van because it is capable of reaching highway speeds even on flats and uphills. The drive south was moderately scenic in its southwestern desert way, with high grassy plains, piñon and ponderosa forests, large mesas, and the occasional crag or cliff-lined cañon. We passed through the redneck backwoods of southwestern New Mexico, descended to the wastelands of the Sonoran desert, and crossed I-10 into the broad and semi-militarized border with Mexico, eventually reaching the trailhead for Chiricahua around mid-afternoon. The “trailhead” is actually a trail sign along a dirt road just wide enough to park a car without blocking traffic.

Much of the area apparently burned in the last 5-10 years, and the trail has seen little work since, so it is often faint and occasionally blocked by deadfall. (This is the trail starting below Sycamore Campground. The Mormon Canyon trail shown on the USGS 7.5′ topos seems no longer to exist.) We followed it up a broad ridge toward the spine of the Chiricahua Mountains, briefly losing it where it switchbacks right around some cliffs on the ridge, then found it again and followed it to where it joined the crest trail.

From here, we followed the crest trail north to Junction Saddle, then the signed trail to Chiricahua’s summit. This trail was usable, but not robust; the other trails shown on the topo seem to have disappeared, perhaps because of the fire. After signing the register and admiring some rock formations to the east, we hurried down to minimize headlamp time, reaching the car less than an hour after dark. Even so far south, daylight is scarce. 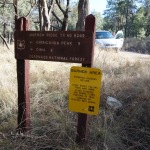 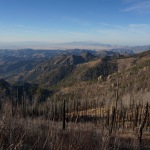 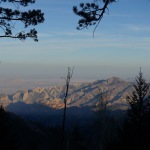 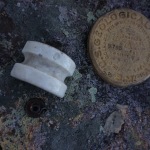 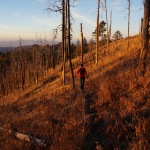