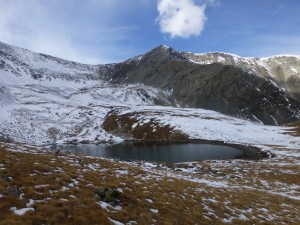 The area “behind” (i.e. northeast of) Blanca is one of the more scenic and uncrowded areas of the Colorado Rockies. It is far enough from the Front Range cities, not on the way to anywhere, requires a high clearance vehicle, and contains the standard trailhead for only one 14er (Lindsey). I had visited in 2010 to tag Mount Lindsey, and was happy to return for a couple of days for some more centennial peaks. 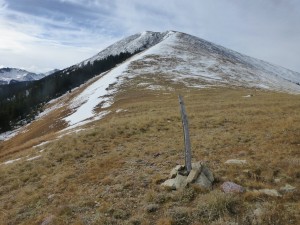 Unlike the region’s 14ers, none of the 13ers is anything more than a walk-up. Getting a late start, I decided to hike California Peak via the Zapata trail. This trail ends at a saddle several miles north of the peak, from which a long, rolling tundra ridge leads to the summit. 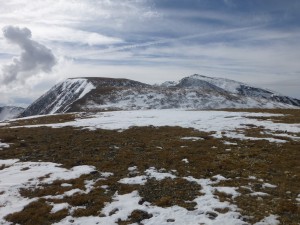 Driving in, I passed several pickups and a few men in the comical-yet-menacing camo and rescue-orange uniform of hunters. ‘Tis the season. With that in mind, I swapped my normal black hat for a red one before heading up the trail.

Though I had stopped on the drive south to allow a herd of elk to cross the road, I saw no game as I made my way up the Zapata trail’s switchbacks. I did pass two hunters, a father and son, standing out in an open field while apparently being quiet. Turning south at the post where the trail ends on the ridge, I started the long off-trail climb to the peak. Looking north, I spotted the bright orange of another hunting party on the ridge. 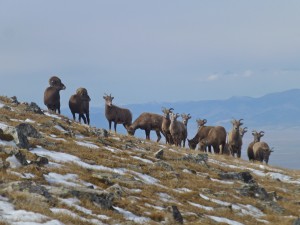 Continuing the climb, I passed a herd of bighorn sheep which stood well within rifle range to watch me pass — maybe they are not in season. Though the east side of the ridge drops steeply, the top and west side are gently rounded grass, making for easy travel. After several false summits, I reached the top of California, which is separated from Ellingwood by a ridge containing several lower 13ers. 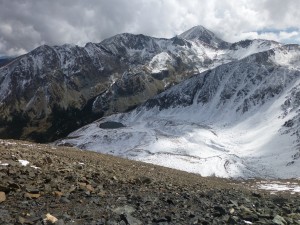 Rather than retrace my route, I decided to descend to the southeast, perhaps crossing the valley to tag Huerfano Peak if I had time and energy. Easy up to this point, the ridge suddenly turns chossy and slow, so I left it at the first opportunity, descending some better-than-it-looks scree to Lost Lake. From the lake, I saw that although I was directly across the valley from the stream leading toward Lindsey and Huerfano, I would have to lose a lot of elevation to cross to the other peak. With clouds building, I decided to save Huerfano for another day. 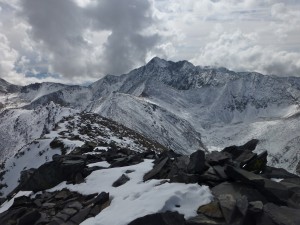 After peering at my options, I chose to descend next to a stream to the lake’s northeast. Though cross-country and partly below treeline, this route is surprisingly pleasant, with mostly turf slopes above treeline, and game trails through relatively open woods below. Reaching the main trail at the base of the valley, I hiked to the upper trailhead, jogged the road back down to my car, then drove back up the valley. After finding a flat spot to camp, I spent a pleasant afternoon reading in the car while watching the rain and snow on the peaks above. 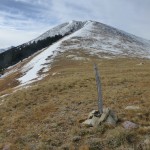 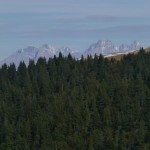 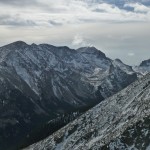 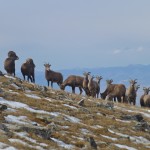 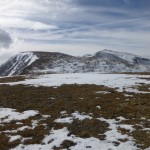 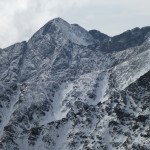 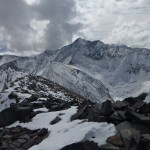 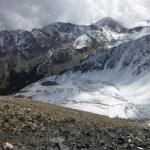 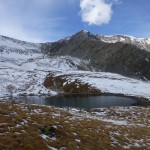