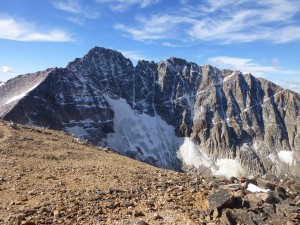 Appropriately- but unimaginatively-named Granite Peak is located in the Beartooth Range of southern Montana. Though not an especially difficult peak, its solid 4th-class finish makes it one of the harder state high-points. 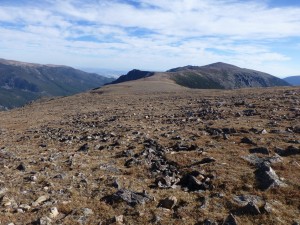 View back to base of F-t-D

The most common approach, though probably not the best, starts from either the East or West Rosebud trailhead, follows a trail to the pass between the two, then climbs from 10,000 to nearly 12,000 feet along the aptly-named Froze-to-Death Plateau over several frustratingly rocky miles. (The Beartooths contain many such high plateaus, possibly left over from when ancient ice sheets blanketed the range.) The route finally descends several hundred feet to the saddle between Tempest and Granite, where the real scrambling begins. A second, possibly better route follows the trail from West Rosebud all the way past Mystic Lake, then continues cross-country to Avalanche Lake before ascending talus to the saddle. This second route would be particularly appealing during thunderstorm season, since it remains at lower elevations as long as possible. 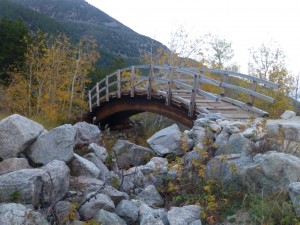 Descending from the Crazies, I gawped at Big Timber’s new Tesla charging station, then drove on down to the West Rosebud trailhead, where I tried to sleep near an obnoxiously loud brook. Starting sometime after dawn, I passed through the power (or water?) plant and its associated residences, then continued up the rocky trail toward the Mystic Lake dam. A water pipe on the opposite side of the canyon, staying near the level of the lake, let me gage how much I had left to climb. 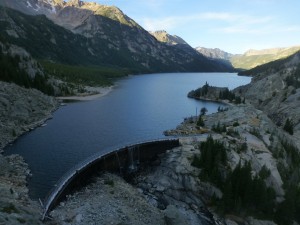 After climbing over a rise to one side of the dam, the trail descends and travels along the lakeshore. Unlike the Sierra dammed lakes, which are pathetic mudflats at this time of the year, Mystic Lake seemed nearly full. Partway around the lake, I took the obvious trail over toward East Rosebud, and began the next 2,000 feet of climbing. This trail switchbacked gently through gradually-thinning forest, finally depositing me at the far end of Froze-to-Death Plateau, with no view of Granite. 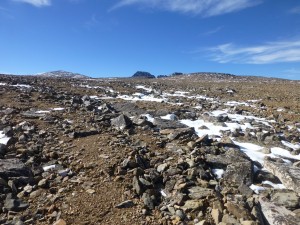 For the next… forever, I followed occasional large cairns along the right-hand edge of the plateau. Despite being a common route on a popular peak, there are rarely signs of a trail in this section, and while the terrain is not terrible, it is too uneven to be comfortably runnable. Still, the cairns helped me plot a reasonably efficient path through the plateau’s random undulations. 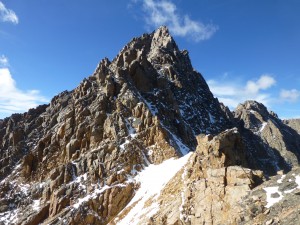 At the high end of the plateau, I passed within 200 feet of Tempest’s summit before descending along a faint use trail to the Tempest-Granite saddle. Crossing over a couple of tent platforms, I descended slightly on the south side, then followed cairns and bits of trail up sand and talus to the subpeak where the real climbing begins. Even late in a not-particularly-wet year, this subpeak was separated from the main summit by a small snow saddle, but it was soft and flat enough not to be threatening.

After crossing the saddle, things immediately got more tricky, with steep traversing left toward some chimneys. Though the recent snow was consolidated enough to kick steps in places, I avoided it in my trail runners, limiting my climbing options. Though I had a route description with me, I soon ignored it, instead making my way up and left toward the summit by whatever route seemed reasonable, occasionally back-tracking. I found many cairns and several nests of slings, but the cairns at least seemed to represent multiple routes. 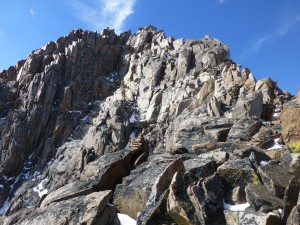 Where the summit’s leaning block was visible above an unappealing mud-and-slush chute, I retreated a bit, climbed up on a helpful stack of rocks, then made an exposed traverse back right. From here, I plotted a meandering course along ledges and cracks toward the summit ridge, then followed that a few yards to the summit itself. 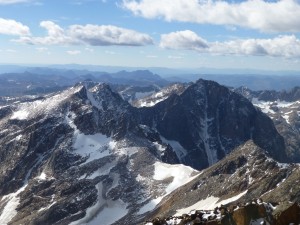 Peaks to the SW

I had chosen a near-perfect day for the climb, too late in the season for thunderstorms, but still warm enough to almost be comfortable in a t-shirt on top. After lying on the excellent summit nap rock for awhile, I psyched myself up to reverse the tricky route. 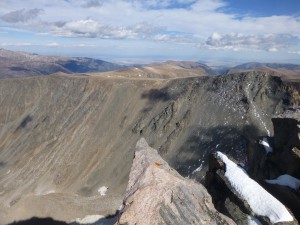 Finally nearing the snow saddle, I found an older couple hanging out taking pictures. Surprised I had not passed them or their camp on the way up, I learned that they had come up the valley via Avalanche Lake, but had run out of time on their attempt to summit. After exchanging photo duties, I left them behind as I scurried down to the saddle with Tempest, then plodded slowly back to Froze-to-Death.

Though I had the energy to jog, I found the plateau too uneven to make it worthwhile, so I put on some talk radio for the long walk. I jogged some of the trail back to Mystic Lake, but by then I was less in a running mood, and almost certain to make it back without needing my headlamp. Though I was tired, habit made me jog some of the final rocky trail, a mistake that gave me a black eye when I tripped on one rock and bashed my eye on another. There’s a first time for everything, I guess. 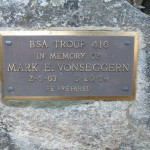 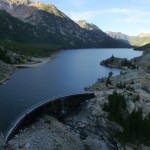 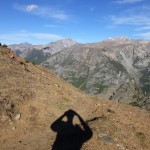 Wood and Pyramid from base of Froze-to-Death 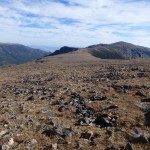 View back to base of F-t-D 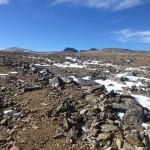 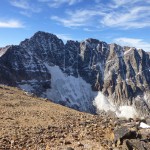 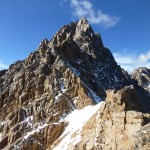 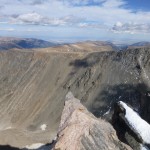 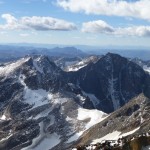 Peaks to the SW 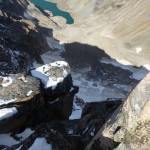 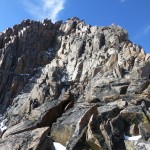 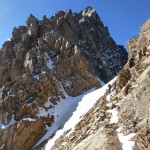 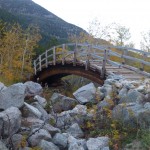