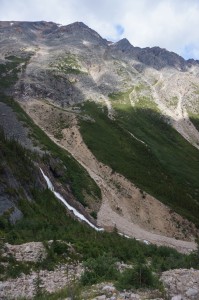 Mount Geraldine is an unofficially-named peak northwest of Geraldine Lakes, across the Whirlpool River from Mount Edith Cavell. Thanks to the vagaries of Canadian precipitation and cloud-cover, I found it nearly dry while nearby Cavell was covered in a half-foot of snow. While its north ridge is supposed to be a fun 5.5 scramble, I ended up climbing its southeast face, an easier but still enjoyable affair. 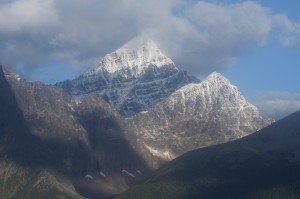 Starting from the Geraldine Lakes trailhead, I mistakenly followed the old road to the abandoned lookout, hoping it would provide access to the peak. While the site of the former lookout had an excellent view of Edith Cavell, dense forest made the approach to Geraldine unattractive. 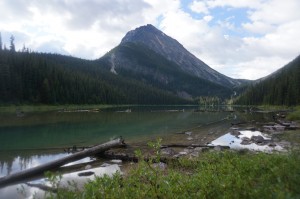 After taking some photos, I returned to the trailhead and took the trail to Geraldine Lakes, half-resigned to simply going for a walk in the woods. Along the way, I explored a possible approach to the peak through the woods above the first lake, but again abandoned it. 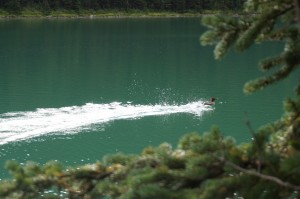 Following the boggy trail along the lakeshore, I passed a canoe chained to a tree, then repeatedly startled some kind of waterfowl with the same defense mechanism as a grouse: stay perfectly still until you are very close, then startle the crap out of you by escaping as loudly as possible. Rather than frantically flapping into a tree, this bird would thrash away along the lakeshore, its paddling feet churning the water behind it. 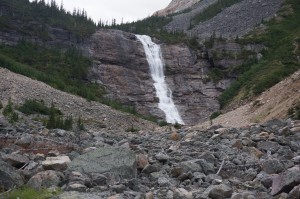 Past the first lake, I followed the trail steeply along a cascade, then across a talus plain and up a steep moraine to the outlet of the lower lake. From there, I had a clear view of Geraldine’s southeast face, and resolved to make something of my hike by actually climbing it. 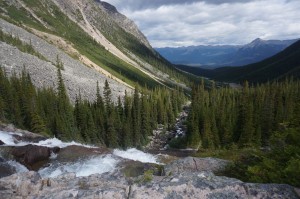 After failing to find a dry and safe-looking way across the outlet stream, I retreated down the moraine, where I crossed the stream below the large cascade to pick up a faint use trail headed for the main bowl on the face. 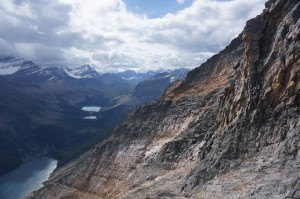 Thanks to the trail, I had less than 100 yards of miserable krummholtz to deal with before I escaped onto the rock face. Water and snow keep the face fairly clean, so the first part of the climb is enjoyable class 2-3 slabs. Where a steep step appears to bar further progress, I followed the slabs up and right, gaining the ridge with some solid 4th class on surprisingly good rock. From there, I followed the ridge to a cairned summit. I saw another cairn on the next peak, perhaps left by people climbing the north ridge, but my point looked higher. 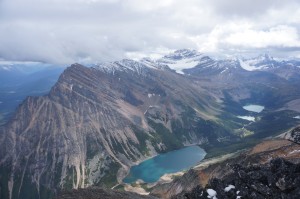 Part of my reason for climbing this peak was to see whether Cavell’s ridge was melting off. After seeing that it clearly was not, I had a snack and picked my way back down the bowl. I downclimbed the step near the watercourse rather than taking the ridge, finding a few 4th class moves but mostly easy climbing. Hiking back on the trail along the lower lake, I was pleased to find two loons on the lake. 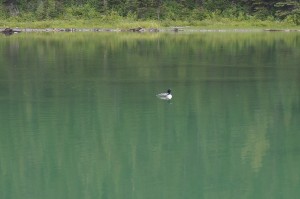 I approached quietly, trying to get a good picture with my camera’s puny zoom, but they noticed me at the same time and silently disappeared. I scanned the surface of the lake for a minute or more, finally spotting them near the far shore. Excitement over for the day, I hiked and jogged back through the bog to the car and headed south. 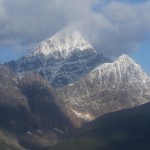 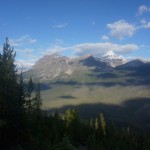 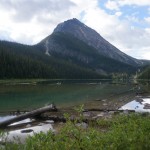 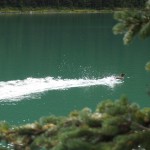 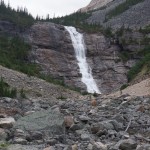 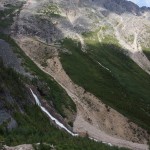 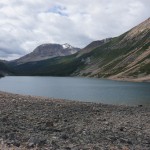 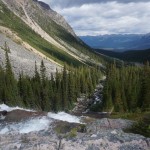 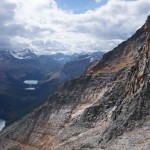 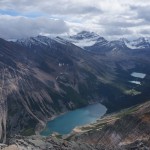 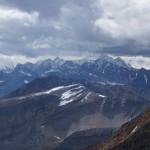 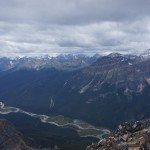 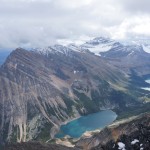 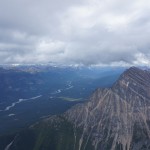 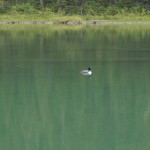 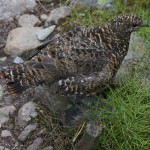