Mount Cline is one of the driest 11,000-foot peaks in the Canadian Rockies, so I headed there hoping to find drier rock. I turned east at Saskatchewan Crossing, then pulled off on some faint tire tracks just past the bridge across Thompson Creek, across the road from a large campground. Another group woke me when they pulled in for a pre-dawn start, but I drifted back to sleep until a more civilized hour. 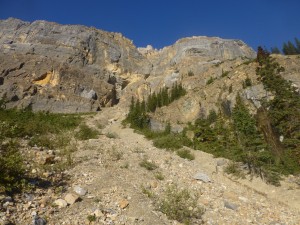 I easily followed the trail along the east side of the creek, through the deadfall of an old burn, to where it forks. I found the improved log crossing the first branch in good shape. I saw no similar log across the other branch, but with the water so low this late in the season, I had no problem crossing via a large boulder to regain the trail on the far side of the west fork. I continued along a mixture of trail and dry streambed up this fork for awhile, eventually entering a steep-sided bowl. This section of the trail would have been much more difficult to follow had the streambed been full. 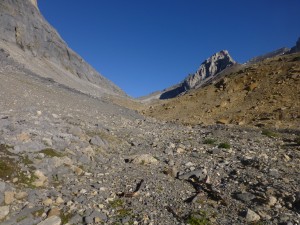 A flagged but faint use trail heads up the moraine on the left side of a gully here, toward the left-hand side of the headwall blocking the upper valley. Remembering the route description, I found the non-obvious place where the trail crosses the ravine into the trees below the obvious bench, then continued along a slightly-developed trail into the upper basin. Here the trail disappears and reappears as it crosses talus fields, reaching a short headwall. While it looks steep, there are cairns above and below an easy class 2 break just right of the watercourse. 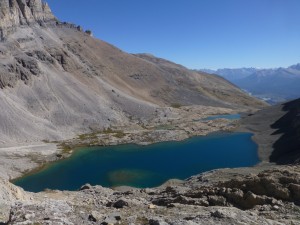 Above the headwall is one of the route’s main attractions, two large tarns in a rolling rock-and-grass bowl. Though they would be unremarkable in the Sierra Nevada, such lakes seem rare in the Canadian Rockies, where most water seems to either collect in large valley-bottom lakes or head straight for the ocean. (As I learned from a sign near Mount Robson, the Fraser River travels from glacier to ocean without a single lake, carrying its glacial silt the whole way.) 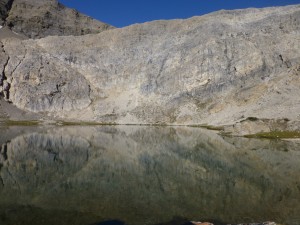 Since I was not camping, I just took a few pictures, then followed a boot-pack up the ramp above the lakes. 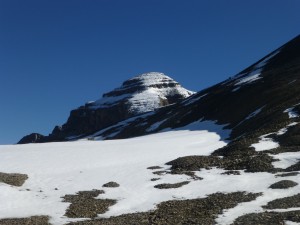 Continuing along slabs and scree, I eventually reached a saddle, from which I could finally see the peak and its southwest ridge, which was unfortunately partly snow-covered. I had carried my axe and crampons to cross the north-facing snowfield leading to the ridge, but with a boot-pack across the crusty snow, they were unnecessary. Even if the snow were absolutely rock-hard, it is low-angle enough that microspikes are all that would be needed to cross it. 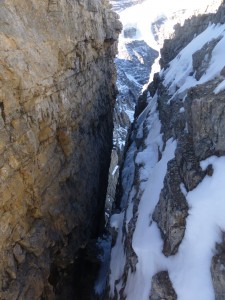 While the ridge is rated 5.4, it is mostly class 2. The exception is two odd gashes just below the summit scree-pile. The first is straightforward: a scramble down to a chockstone, then a few steep moves on good holds back to the crest. The second is actually intimidating, as it is quite deep and overhangs on the downhill side. 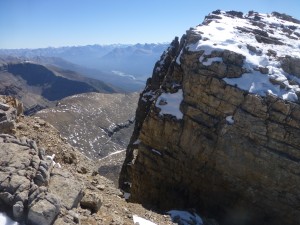 After contemplating a jump, I made an exposed downclimb down the right-hand corner to a point where I could step across to the other side about ten feet down the gap, but still far above the bottom. From there, the route was an easy slog up some loose scree.

I spent a few minutes on the windy summit, trying to pick out familiar peaks, then retraced my path, finding both gaps about the same difficulty in the other direction. I passed a man and his son on the return, headed up to camp at the lakes, but not to climb any peaks. I don’t see the appeal — I don’t think the lakes even have fish — but to each his own. 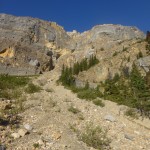 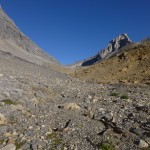 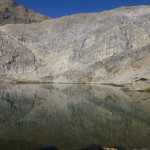 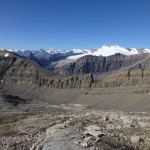 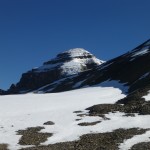 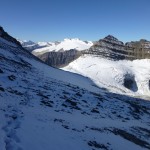 View back to saddle 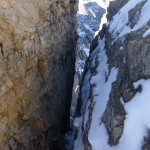 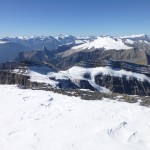 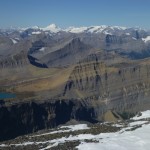 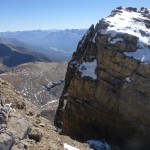 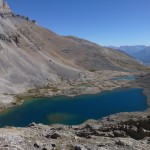