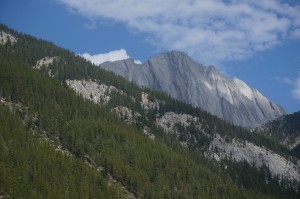 Edith Cavell’s east ridge is supposedly one of the Canadian Rockies’ best scrambles. Unfortunately, not only is the Edith Cavell road closed 12 kilometers from the trailhead (unless you’re a hostel guest), but the east ridge approach itself is apparently closed as well. Hoping to tag it before heading south, I looked for other things to do near Jasper. Driving into town on my way to Robson, I had been struck by some white cliffs to the east, reminiscent of the eastern Sierra. With a bit of research, I determined that they are unfortunately light-gray limestone rather than granite, but that one of the higher ones, Mount Colin, is a decent scramble. 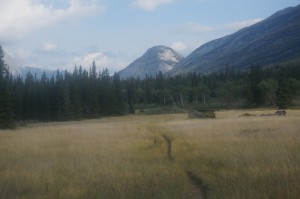 Leaving the Sixth Bridge trailhead (no overnight parking) rather late, I followed the popular Overland Trail past an old homestead, then headed up the obnoxiously rocky, dry Garonne Creek. Where the wash narrows to a slot canyon, I climbed the left-hand bank to find the little-used but well-marked climbers’ trail. 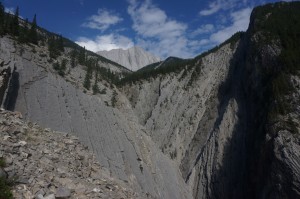 This trail side-hills and climbs steeply up the north bank of the creek until it widens again, then returns to the creek-bed. Along the way, I found several large yellow markers on trees and a hand-line in good condition. Despite its apparent disuse, the trail seems well-looked-after. However, it is also prone to wash-outs, and one short section near where it rejoins the creek is extremely sketchy. 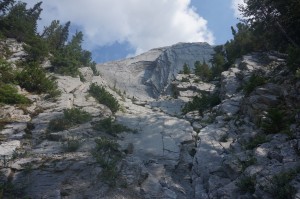 Where the wash turns right, I left it to head directly up a slabby ravine toward the col betwen Hawk and Colin. With water to clear away the debris, this proved to be a fun scramble. Above the ravine, stairstep ledges led up and left to the col. The ridge to Hawk looked straightforward, but I had started late, so I skipped it and headed straight for Colin.

This ridge was supposedly something between 4th class and 5.6, but much of the climb is just a walk along a broad, grassy ridge with cliffs on either side. I passed a couple of 4th class steps and narrow sections, but nothing sustained, and was feeling a bit let down. I eventually reached the crux I had seen online, a vertical step bypassed by a traverse to the right and some steeper climbing in a corner. 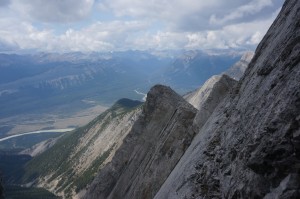 The traverse is actually a comfortably-broad ledge with some handholds above and big air below — a test of confidence rather than climbing ability. I reached the corner, stemmed up the first part, then stepped left onto the face to climb a bit of low 5th class along a seam. After that, the summit was a short scramble away.

I found a canister holding a few wet guidebook print-outs, which I read hoping to find some information on the descent. SummitPost had mentioned a rappel, and while rappels on scramble routes are usually avoidable, I was still a bit apprehensive. Pausing only briefly for a snack, I continued south. 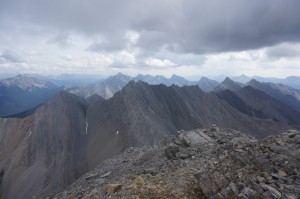 The fracture angle of the rock and the direction and slope of Colin’s north ridge align to create clean, fun climbing. Unfortunately this is not true on the south ridge: the crest itself is littered with debris, the right-hand side is steep slabs, and the left is a series of outward-sloping ledges covered in treacherous moss and scree. Where the ridge narrows after a notch, I found a healthy rappel anchor. 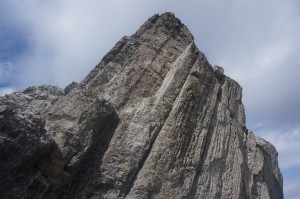 After trying a route to the left and being turned around by unnerving though not especially dangerous scree, I climbed straight past the rappel anchor, going first left then right along the ridge crest. This required a couple of sphincter-tightening off-balance moves on dubious rock, but was fairly secure once I found the solid holds. 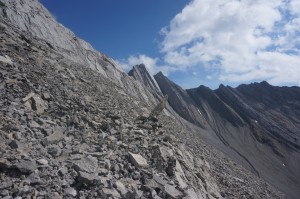 I continued on the ridge to near the saddle, then found the occasional cairn and bit of trail leading through the unpleasantly sharp limestone talus to the valley bottom. A quarter-mile or so down the valley, I found a nicely-maintained ACC hut in the trees. Unlike the other huts I have passed, this one was inexplicably padlocked. I doubt more than a handful of people a year pass by, so the precaution seems unnecessary. Once past the sketchy side-hill out of the creek-bed, the return was quick and painless. I returned to town, then headed down to Edith Cavell to wait hopefully by the gate. 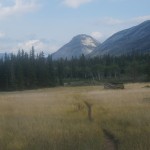 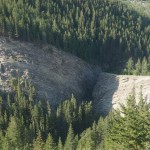 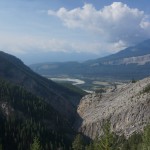 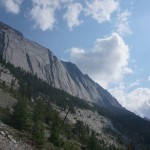 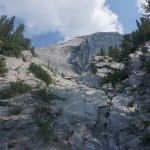 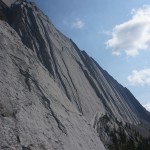 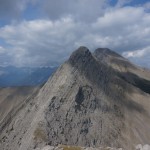 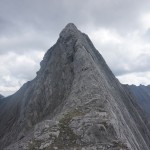 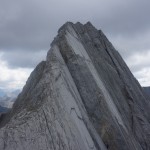 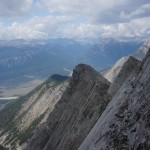 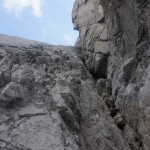 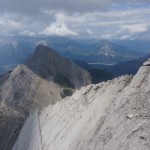 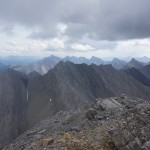 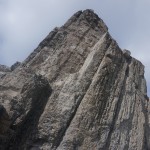 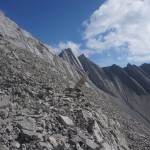 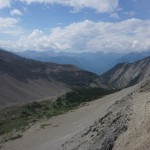 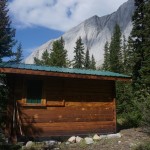 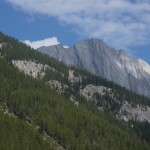 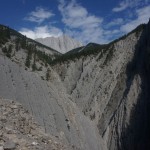