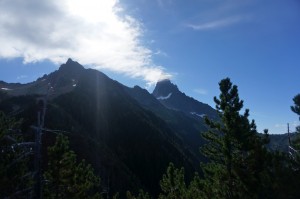 Timid creature that I am in the face of authority, the overfed Canadian border guard’s questions unnerved me enough that I was lucky he didn’t pull me over and make me unpack my car. In retrospect, I realized he just needed some reasonable information: why I was going to Canada, that I didn’t plan to work there, that I had enough money to get myself back out of Canada, and that I didn’t travel with a gun. In the moment, however, I was pathetically cowed.

Continuing to Highway 1, I turned on CBC Radio 1 for some local color. What I found was a lot like NPR, but with more long “o” sounds, and a focus on indian tribes (“First Nations” is the local term) and the fallout from extractive industries (timber mills and leaky tailings ponds). After a short jaunt on the highway, I turned off at the town of Chilliwack and followed the signs for Chilliwack Lake. Until I felt more comfortable in the strange nation of Canadia, I wanted to stay close to America. 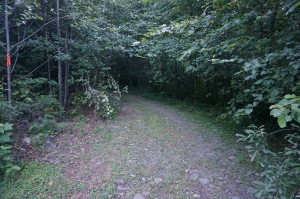 My first objective was Mount Slesse, an impressive landmark I first saw from Baker and Shuksan. Though it is famous for its long 5.9 Northeast Buttress, there is an easier class 4-5 route from the west, and I had another objective nearby. I drove the logging road up Slesse Creek, past some big fences with warnings signs and instructions about what to do when you hear a blasting siren. Finding a post indicating the Slesse Mountain Trail, I continued along the right-hand branch, driving up a car-shaped tunnel through the overgrown brush. Reaching another junction, I decided I would rather not drive up the darker tunnels in either direction, and camped there for the night. 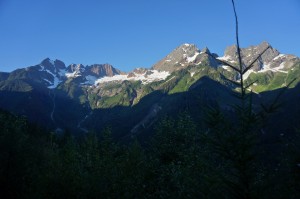 The next morning, I hiked up the right-hand tunnel, and within a couple hundred yards found a campsite with some Budweiser cans hanging from the trees, and a wash-out emphatically terminating the road. Crossing the wash, I continued along a fairly clear use trail on the old roadbed, weaving under, around, or over the occasional obstruction. Just after the washout, I followed the road as it switchbacked upslope before continuing south. Oops. There is a near-invisible fork here, and the actual Slesse Mountain Trail continues south. However, my road was the more obvious, and it was not until I returned that I realized my mistake. 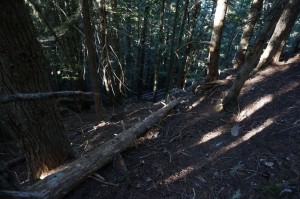 Where the road passes into a recent clearcut, it becomes much less usable, overgrown with raspberrie and other brush. After following a couple of switchbacks up through the clearcut, I became frustrated and went cross-country into the woods. I figured I might find the supposed trail; if not, I would at least be able to find the peak, and hopefully pick up the trail on the way down. Once out of the logged area, the woods were surprisingly easy to travel, with occasional game trails on steep, relatively clear ground.

One long grunt later, I reached an open patch on a ridge, and realized I was on a spur ridge leading to the main ridge north of Slesse, its sinister summit spike visible amidst clouds to the southeast. I found mostly easy travel in the woods for awhile, passing a random bit of flagging around a few cut trees. After a steep portion, I reached an open bump on the ridge with good views and a cairn. From here, the ridge narrowed and became rather unpleasant, its red, rotten rock infested by krummholtz. After sketching and bashing my way along this short section, I emerged on the heath and talus below what I believe is Parkes Mountain, the minor summit north of Slesse. 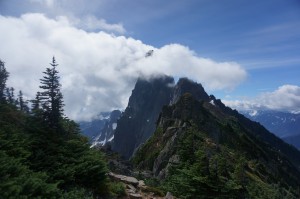 Since Parkes was almost in my way, I decided to tag it, finding a bit of 3rd class scrambling near the summit. From there, a long traverse on or near the ridge-crest got me to the north edge of Slesse without much difficulty; I noticed an occasional bit of path along the way. Here I contoured high along the west side of the ridge, hoping to intersect the standard route. After wasting some time climbing a northwest sub-summit, I retraced my 4th class steps and finally found the trail. 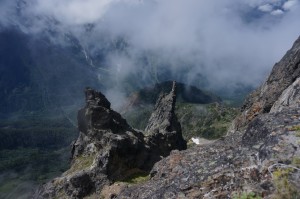 After climbing a chossy gully, the route ascends south, crossing the next rib at a horizontal block, then ascending the next, 4th class gully. I followed bits of trail and rap stations around to the final gully leading to the peak’s south face. Here, some fun class 4-5 climbing on mostly solid rock led to the summit, where I found a tube full of wet paper and an old hatchet (which I probably should have taken to ease my return).

After getting off the summit, I gratefully followed the well-flagged trail back to the standard camping area, then nearly lost it in the dirt and choss below. Very much wanting to follow a trail, and remembering Beckey’s warning about straying too far south, I searched north and regained it. Though the trail is well-marked by flags and orange plastic nailed to trees, it is very faint, and some of the flagged trees have fallen. 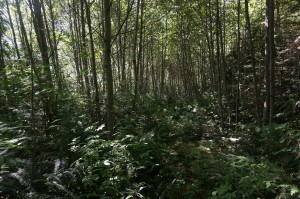 After a long, very steep descent, the trail and flagging disappeared completely where the valley started to level. Continuing downward, I reached an old road-bed extending in both directions, with nothing I saw to mark the trail. This route would be next to impossible to find on the way up; the best approach would probably be to get near the desired stream/ridge, head up from the road a hundred yards, then cut back and forth through the woods looking for a flag. 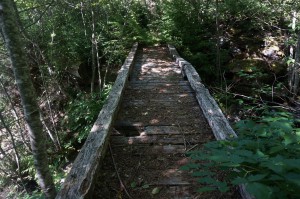 As I walked the old road, a bit of a trail emerged, and I even crossed an old wooden footbridge. I expected to soon emerge in the morning’s clearcut and join my old road, but after walking much longer than expected without seeing it, I figured I would eventually join a maintained road down the valley, then find my way back to the car. Pushing my way through some brush, I emerged on a more open road at a switchback, and took the downward branch. I shortly crossed a washout and, looking back, was startled to see the morning’s hanging Budweiser cans, and realized I was almost home. Hopefully Canada’s other trails are easier to find. 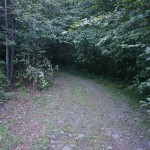 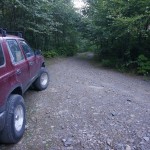 As far as I wanted to drive 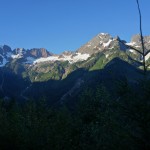 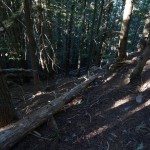 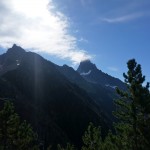 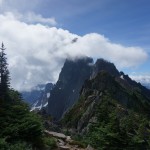 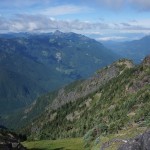 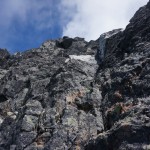 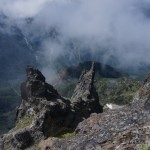 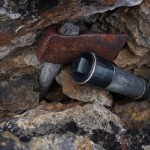 Should have taken the axe… 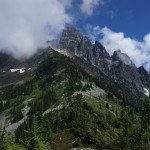 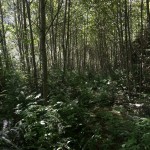 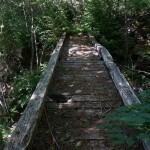