For those of you familiar with Washington climbing… no, not that Torment-Forbidden.

Forbidden is the major peak between Eldorado and Boston on the north side of the Cascade River, its north ridge dividing the Forbidden and Boston glaciers. Torment is a minor sub-summit on its west ridge, and the traverse between the two is a moderate 5th-class classic. After an unwanted rest day forced by nonstop rain, and a night listening to bits and pieces fall off Johannesburg, I decided to head in the opposite direction, up the well-worn climbers’ trail to Boston Basin. The Torment-Forbidden traverse had been on my to-do list for awhile, and it seemed like a safer option than Johannesburg. 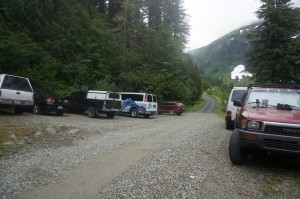 The small parking area for Boston Basin was completely full, and as I climbed, I passed a couple large, very wet groups descending from what must have been a cold, wet, miserable backpack. Or maybe these PNW climbers enjoy that kind of thing, like marmots enjoy pee. 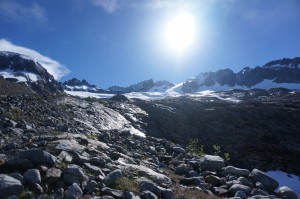 Reaching the open part of the basin, I saw that the rain below had been snow on the rock above, and hoped that it would melt off quickly. I traversed west across the basin, climbed up some slabs and across the little glacier next to Torment, and the torment began. 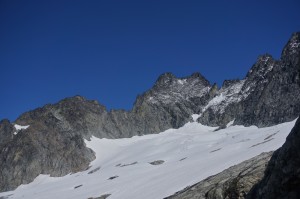 I was hoping to reach the southeast face route, the easiest way up Torment, but the open moat forced me right, toward the Forbidden ridge. Not a problem — if I was going to traverse it in one direction, I should be able to do so in the other. The climbing was a smorgasbord of sketchiness, with outward-sloping slabs, snow, and melt-water running down the whole thing. Rather than a mere dusting, a good 2-3 inches of wet sludge had fallen on the rock, so I could not wait for it to melt.

After failing to traverse left onto the southeast face, I headed straight for the first notch in the east ridge, where I found a deep, open moat on the other side. Planting my axe across the gap, I did a “beached whale” onto the snow, then carefully traversed west along the north side of the ridge, looking for a place I could both re-cross the moat and scale the rock on the other side. Failing to find anything that looked feasible, I jumped back across the moat at the notch, descended the south side a bit, and found a traverse onto the southeast face, where more wet climbing eventually got me to the summit. 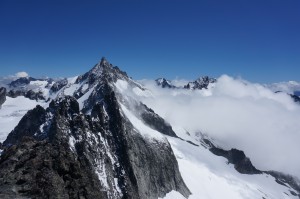 Forbidden from Torment, a no-go

The supposedly “easy” part of the day had been sketchy enough; looking toward Forbidden, I saw plenty of snow still on the ridge, and decided the traverse was not happening. However, I still had plenty of daylight left to scramble up the walk-off route. Descending the southeast face, I got close to the snow, did a bit of a wall-run and crash-landing to get off the rock, then found a circuitous path back to the morning’s moat-crossing. 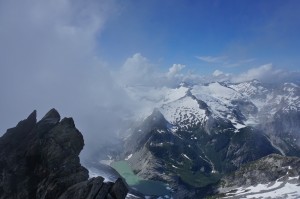 A traverse across two small glaciers south of the ridge got me to the base of Forbidden’s east “ridge” route, which does not follow the ridge, but traverses the north face. This was, of course, wet and snowy, but the underlying rock is only class 3-4, so it was manageable. I bagged the peak, admired the view west toward “Pea Soup Lake” and the Eldorado group, then retraced my steps, jogged back to the car, and drove back up to the end of the road to get ready for (hopefully) some real climbing. 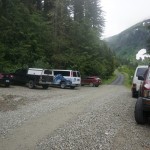 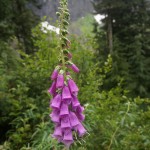 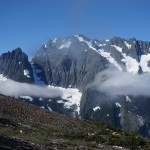 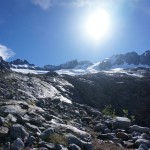 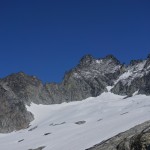 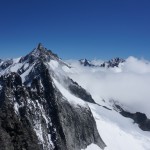 Forbidden from Torment, a no-go 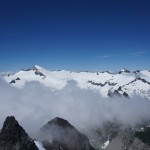 Eldorado and Klawatti from Torment 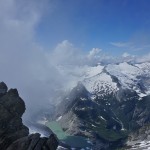