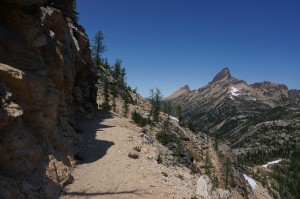 I should have used my good weather day for Goode, but I felt too physically abused by Jack when my alarm woke me. Instead, I went back to sleep, then wrote and read for awhile until I felt like I wanted to do something. Looking at my map, I noticed that Tower and Golden Horn, two striking pyramids visible from Washington Pass, were only 5-10 miles away along the PCT from Rainy Pass. I put a minimal selection of food and gear in my pack, pulled across the road to the north PCT trailhead, and got started around 10:30, passing three young women on a dayhike to Cutthroat Pass. 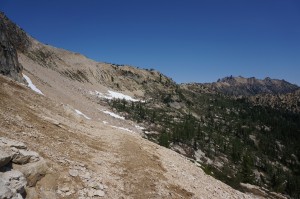 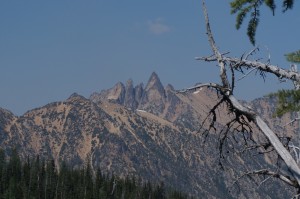 This section starts out in the woods, then gradually meanders up a broad, open bowl to a saddle leading east to Cutthroat Creek and the Methow Valley. After contouring northeast for awhile, the trail drops to the very un-pass-like Granite Pass before continuing to the west of my two peaks. I left the trail at a convenient-looking point, scrabbling up through scree and brush to Tower’s south ridge. The sudden contrast between the dry, eastern-sierra like terrain in this part of the Okanogan Range and the mass of glaciers to the west is striking.

Tower’s south face looks sheer, but I thought I could figure something out. I became less optimistic as I reached its base, but eventually found a convoluted, traversing, low 5th class route through the first difficulty, then the next; a couple of old slings showed that I was not the only one to try this. 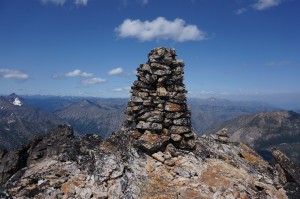 Reaching the final summit ridge, I found a line of cairns leading to a man-sized one on the summit. 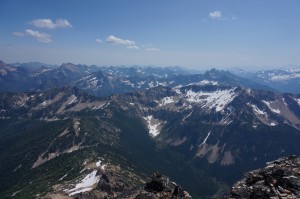 I should have continued to Golden Horn, but this was supposed to be an “active rest” day, and I had had a late start. I followed the line of cairns down the standard route until they trailed off in a long slab-and-choss gully. I knew the PCT was down there somewhere, so I picked my way down the endless thing until I spotted the trail, then walked and jogged back to Cutthroat Pass, admiring the unclimbable-looking Needles to the northeast. After a perfect run down the last couple of miles to the trailhead, I drove down to Bridge Creek, hoping the weather would behave itself for the next day’s outing to Goode. 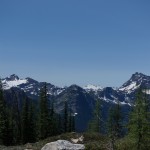 Corteo and Black from below Cutthroat Pass 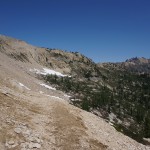 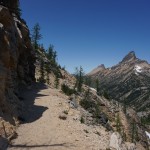 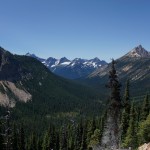 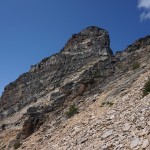 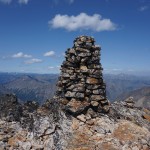 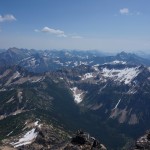 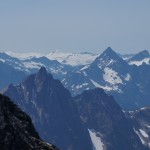 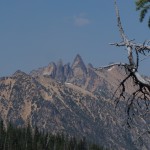