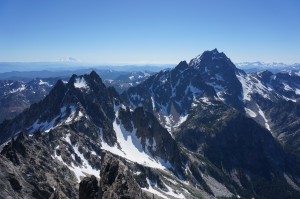 Traverse (and Rainier) from Colchuck

Stuart and Dragontail are two ends of a long ridge at the southern end of the high, non-volcanic Cascades. Having climbed both separately, I returned to traverse the remainder of the ridge between the Sherpa and Colchuck glaciers. While there was some good climbing on this route, most was a grim mixture of choss and krummholtz, with just enough short class 4-5 problems to make it slow going, and plenty of opportunities to cliff out. On a slow-feeling day, this took me about 12 hours car-to-car from the Stuart Lake trailhead; a full Stuart-to-Dragontail traverse would be a reasonable day, but not much fun. 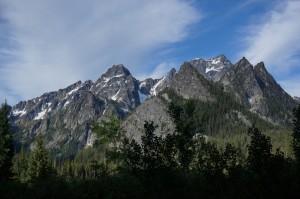 Sherpa and Stuart from trail

After failing to find my running-shoe crampons in the chaos of my car, I got started a bit after 6:00, cruising up the trail past the fork to Colchuck Lake. After passing some swamp/meadows, I left the trail along a game trail at the end of a switchback, and was pleased to soon find cairns and a mostly-excellent climbers’ trail through the woods. It disappeared in a large boulder-field, then reappeared on the other side to follow a creek to the right, gaining elevation toward Mount Stuart. 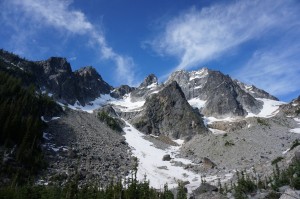 At an opening in the trees, I could see that I was well into the Stuart-Sherpa cirque, and my climbers’ trail was the approach to Stuart’s classic north ridge. While I had planned to climb a couloir on the other side of Sherpa’s northeast ridge, it looked like the small Sherpa Glacier would work as well. 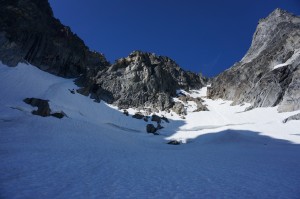 The recent warm weather had fortunately softened the surface snow even in the shade, as I had only an axe. I took the path of least resistance on slabs and snow to the small band of exposed glacial ice, which I skirted to the left. Snow bridges still crossed the bergschrund on both couloirs leading into the glacier, though the right-hand one had nearly melted out. I crossed the ‘schrund on the left, then carefully kicked steps up some “don’t-slip-here” snow until I was able to transfer to the safer rock rib between the two couloirs. I found the first of the day’s unnecessary slings around a rock near this point; as with the rest of the day’s tat, I regretfully left it in place. 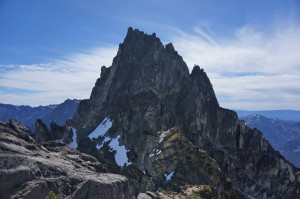 After some class 3-4 scrambling, I found myself on the Sherpa-Stuart ridge near its low-point. I dropped slightly around one rib, then more or less followed the ridge to the summit, finding fun class 4-5.easy climbing, along with one awkward bit of desperate but not especially exposed groveling. As on Bonanza, I passed an appalling number of slings for a moderate route on a non-classic route, including a half-dozen or so wrapped around the summit. 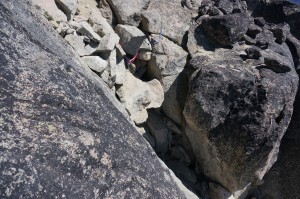 Two of many gratuitous slings

Though I have no evidence for this theory, I suspect techies who have learned that the easiest way to solve programming problems nowadays is to throw more hardware at them, without concern for resource usage; applying this approach to the mountains, they substitute hardware for skill and effort. Later in the day, I found rap anchors and cheater slings on chockstones with short 4th class bypasses, multiple anchors within feet of each other, and other signs of waste and laziness. 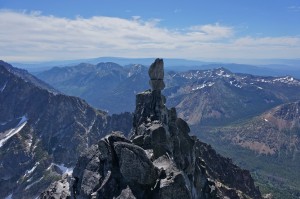 After signing the register, I scrambled over to Sherpa’s overhanging block stack, a striking tower visible from most neighboring peaks. The standard way to climb it involves a shoulder stand on one overhanging side to a ledge, then a few moves of purportedly 5.7 climbing, protected by an old ring piton. 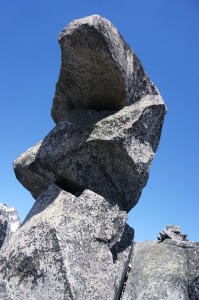 Having noticed a register entry by someone who had free-climbed (solo?) the block, I took a look around, and found the free route up the back. While not something I would solo, especially in running shoes, it involves no worse than a thin mantle onto a short, face-y section leading to the shoulder-stand ledge. 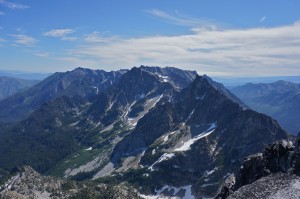 I followed a well-worn route to a saddle, then left it where it dropped into the southern drainage. The ridge from here nearly to Argonaut was fairly consistently wretched, a mixture of sand and small 4th class difficulties overlaid with krummholtz, baked by mid-day sun. I tried to follow goat paths where I could, but they were rare and often unsuitable for humans. The terrain improved somewhat on the other side of Sherpa Pass, as the ridge rose over several sharp spires toward Argonaut. Almost without exception, the spires were gentle on the east side, so staying on the ridge rarely resulted in cliffing out. Where the crest was too sharp, however, traversing around to either side was often brushy and/or loose. 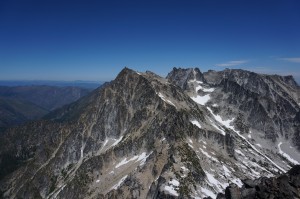 Reaching Argonaut, I scrambled up and right of the large leaning block and tunnel, then rested and considered my next move. Tired of brush, I dropped left of the ridge, descending on a mixture of rock and snow to the broad plain at the saddle with Colchuck. It might have been faster to drop farther southeast, but I instead followed a series of ledges and goat paths on the left, eventually crossing back onto Colchuck’s broad south face when things got tricky. A well-worn path led along the east side to the summit. 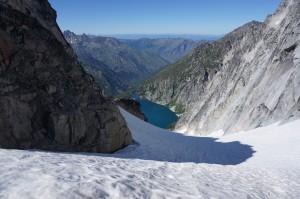 About to descend Colchuck glacier

After taking in views similar to those from Dragontail, I followed the trail to the Colchuck-Dragontail col, then plunge-stepped and boot-skied down the Colchuck glacier to rejoin the Dragontail approach route. With just a daypack and plenty of daylight left, the return was much faster and more enjoyable than last time. 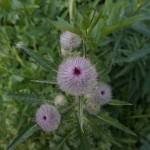 Thistles on the approach 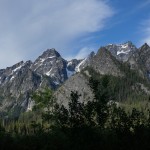 Sherpa and Stuart from trail 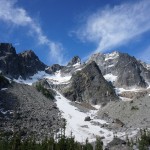 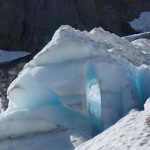 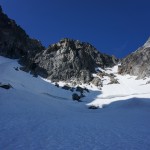 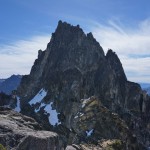 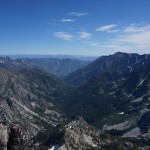 Toward trailhead from Sherpa 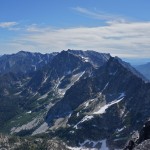 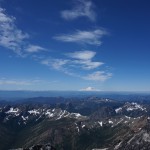 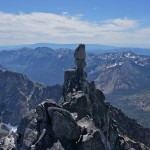 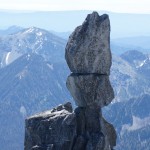 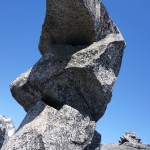 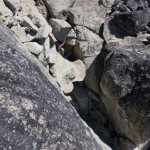 Two of many gratuitous slings 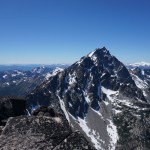 Sherpa and Stuart from Argonaut 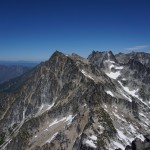 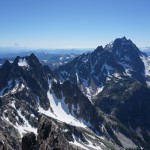 Traverse (and Rainier) from Colchuck 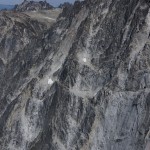 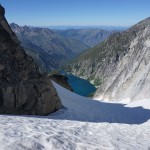 About to descend Colchuck glacier

One response to “Sherpa, Argonaut, Colchuck”