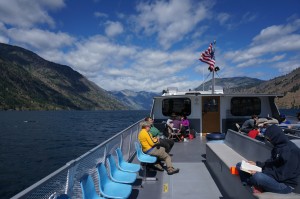 Having unfinished business with Bonanza and Fernow (my old nemesis) in the Entiat, I overcame my distaste for rain, backpacking, and paying for transportation long enough to spend a few days over in Holden. Like Stehekin (ste-HEE-kin) to its north, Holden is reachable only by ferry over Lake Chelan (shuh-LAN), providing invaluable access to an otherwise extremely remote part of the east-central Cascades. For example, Bonanza Peak is about a 50-mile round-trip from the nearest car-accessible trailhead, but only 12 from Holden. While a dayhike of Bonanza from the road is probably not impossible, it (and neighbors along Agnes Creek) look like some of the hardest dayhikes in the lower 48, probably harder than anything in the Sierra.

After buying my ticket, I filled my bear can with random backpacking food (instant potatoes, dried “beef” flakes, a half-dozen sandwiches, bargain-bin cookies, Walmart trail mix), killed time at Starbucks, and joined the campers at the Chelan Walmart for a short night’s sleep. At 8:30 the next morning I boarded the “Lady of the Lake II” with some backpackers and tourists bound for points up-lake. To my disappointed surprise on a summer weekend, there were lots of trekking poles, but mine was the only axe. The Lady made her stately way northwest to pick up some supplies and passengers at another landing, then continued north to the more inaccessible regions of the lake.

It quickly became clear why Chelan is both an active waterway and a formidable barrier. While the lake is deep (up to 1500 feet) and navigable year-round, its sides rise sheer from the water for hundreds or thousands of feet almost everywhere, making road-building or even landing a boat difficult. 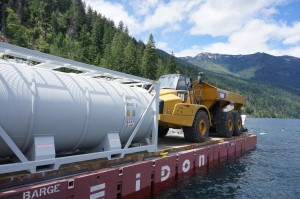 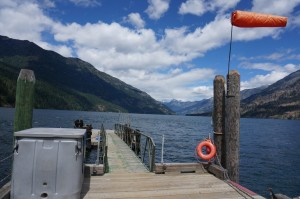 We landed most of the backpackers at the mouth of one stream for a 2-day hike to Stehekin, then continued to Holden’s much larger dock at Railroad Creek.

Holden is currently in year two of a multi-year mine remediation project, and a giant barge with a Cat earth-mover and various supplies floated alongside the dock. After some confusion, I boarded one of Holden’s old school buses, which followed a much newer bus full of miners up the much-improved road to the village, pulling over several times at a dispatcher’s command to let construction vehicles pass. The rest of the bus’s occupants were “Holdenites” (my term), Lutherans living or staying in the village.

Arriving at the village, I was greeted by 20 or people smiling and waving — not for me, of course, but for the day’s sole contact with the outside world. The friendly but stressed-out receptionist offered a cascade of bad news: first, the bus I just rode cost $10; second, on my way out I would have to hike the ten miles back to the lake between 7 PM and 6 AM, because the trail paralleling the road is also closed; third, all reasonable access to Copper Creek — the normal Fernow access — was closed by the mine remediation. Oh, and I could expect “lovely warm rain” in the afternoon. Hopefully I wasn’t too surly. 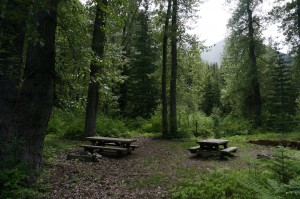 The good news was that, while the village normally has several hundred guests and campers at this time of year, thanks to the construction I was the only non-Holdenite.

I hiked the extra mile to the temporary “campground,” a few tents’ worth of flat ground next to a couple of picnic tables, threw my whole pack in the bear box, and took off for a rainy hike/jog toward Cloudy Pass. 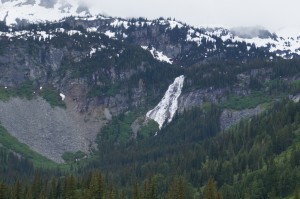 I made it almost to Crown Falls, at which point I was used to being entirely damp, then returned to camp to huddle in my tarp, read, and eat. I eventually cooked myself a pot of nutritious glop (oil, potatoes, “beef” protein flakes), and was sound asleep by 8:00. 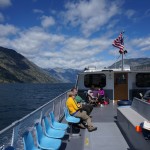 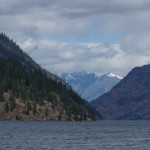 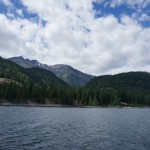 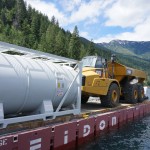 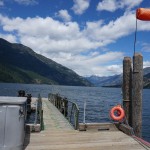 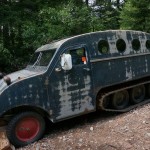 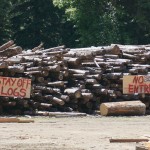 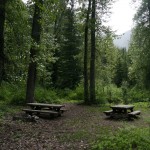 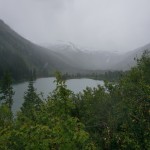 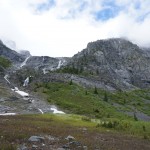 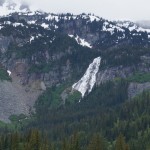 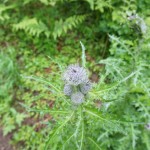