Bonanza, Washington’s highest non-volcanic peak at 9510 feet, was my main reason for taking the boat to Holden. The standard route follows the trail to Holden Lake, ascends the Mary Green Glacier, then climbs 500 feet of fairly good rock to the summit. When the peak is not obscured by clouds and snow, it is a fairly straightforward climb and a reasonable day from Holden.

Waking to cooler temperatures and clear skies, I started along the trail around 7:00, then headed off-trail toward a log I had spotted the day before crossing Railroad Creek just east of the mouth of Big Creek. After a half-hour of bushwhacking, I failed to reach the log thanks to an intervening stream and some very dense brush, and failed to find another crossing higher up. 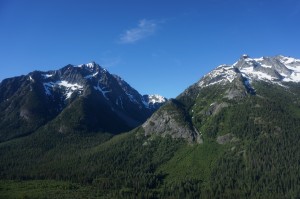 Oh, well… it was back up the Holden Lake trial to Bonanza. 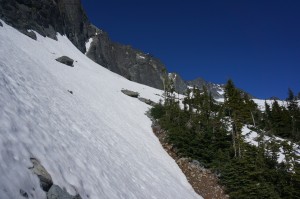 Making good time to the lake, I traversed around its west side, climbing a different, cliff-less channel through the headwall to reach the glacier/snowfield lower and farther south. The snow was kind of a mess from the recent rain, but at least this time I could see where I needed to go. 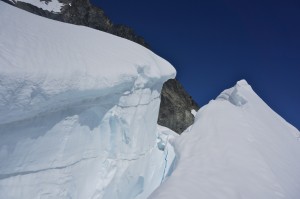 I headed up the left-hand side of the glacier until I got cliffed out by a large crevasse/bergschrund at the base of the upper lobe, then traversed around right to eventually reach the obvious snow tongue below the summit. 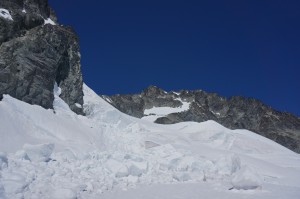 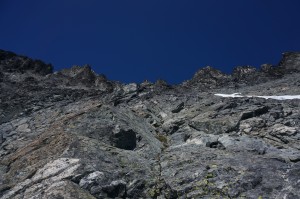 I carefully stepped onto a rock rib with a rappel station at its base, then skittered up the rock a bit to find a flat enough spot to remove my crampons. Making my way up and slightly left on the path of least resistance, I found pleasant class 3-4 scrambling on much better rock than the previous day’s mossy choss. Heading a bit too far left, I managed to cliff out and waste some time, but still reached the summit in about 4 hours from Holden.

The sky was perfectly clear with a somewhat chilly breeze, so I set the register booklet, wet and frozen solid, on a rock to thaw and dry, bundled up in a sheltered spot, and admired the views. 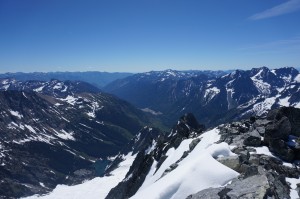 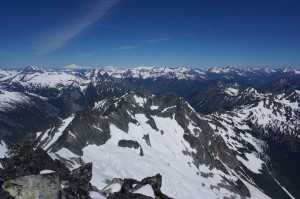 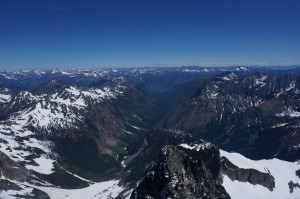 North, I could identify peaks from Gardiner and Silver Star in the east, to Baker and Shuksan in the west. Directly west lay hard-to-reach Dome Peak, with higher Glacier to its south. South, Fernow beckoned from the high Entiat, with Stewart and the Enchantments visible in the distance.

Hoping to put in a full day’s work, I looked to neighboring North Star and Dark Peaks, connected to Bonanza by south and north ridges. 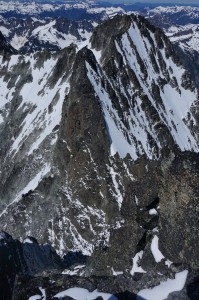 However, getting to them required reaching Bonanza’s west summit, so they might as well have been on the moon. Heavy glaciation has made connectivity in the Cascades difficult not just by carving 6000-foot-deep valleys between neighboring peaks, but also by creating impassably sharp choss-ridges between them. Though less than a quarter-mile distant, Bonanza’s west summit is separated from the true summit by an improbably steep and serrated ridge, covered on its north side with dubious-looking snow. Someone has probably traversed it, but it looked far beyond my abilities. The only feasible combinations seemed to be a traverse to Martin, which I had just done, and a slog over to Dark across the Company Glacier, which looked unappealing.

After waiting for the register to dry, I signed in and started down. I am always somewhat disgusted by slings left on class 3-4 scrambling routes, so with perfect weather and plenty of time, I spent awhile removing nearly all of the tat from Bonanza’s upper reaches. In the end, I removed 25 slings weighing several pounds, leaving only three that I saw: one too far away, one I missed in passing, and one I would have had to cut. 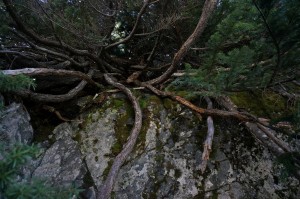 After retracing my steps across the snow, I got slightly off-route on the descent gully, and quickly landed in Serious Bushwhack. Getting back on-route required crossing a lattice of super-krummholtz several feet off the ground, then tunneling through it to lower myself down a short, mossy cliff on downward-growing branches. Ugh. With my pack heavy with tat, I couldn’t run down the trail, but still made it to camp in the middle of the pleasantly sunny afternoon. I spread the tat on the table, then found a shady spot to read.

Our Lady of the Dirtbags came by later with a young woman who, after doing the PCT, was temporarily avoiding the Real World by working at Holden for the year. Volunteering at Holden seems pleasant and is open to non-Lutherans, though it sounds a bit too full-time to get in much climbing. Unsurprisingly, they were curious about my pile of wet garbage. Before she left, Our Lady presented me with gifts of food, including a roast beef sandwich, fresh fruit, and two pilfered brownies in a napkin. Score!

Note to climbers about tat 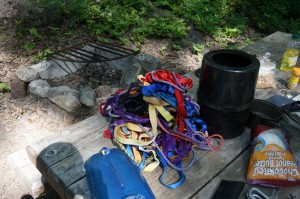 Tat should not accumulate on scrambling routes. If you are climbing something unroped, you should be able to downclimb it, so rappels are unnecessary. Furthermore, on non-vertical terrain they are usually awkward, and can be dangerous if the rope sweeps loose rock off shelves onto those below. If a stronger climber is belaying weaker climbers up the route, that climber should clean rappel anchors after the others have used them, then downclimb. If you find yourself wanting to “reinforce” an existing rappel anchor by adding your own sling, you should remove the old ones, which you evidently find untrustworthy. Whenever possible, you should use existing anchors rather than add your own.

The only good reason to add tat on a scrambling route is a retreat in worsening conditions. 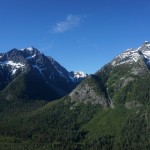 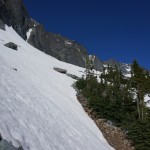 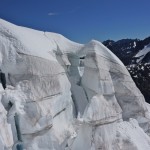 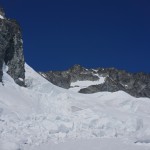 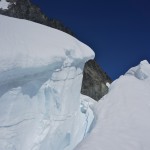 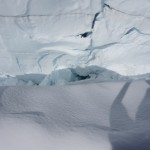 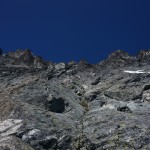 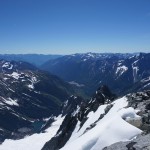 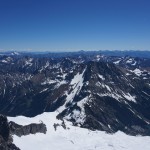 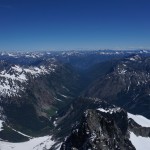 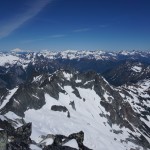 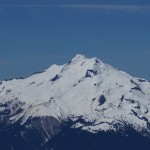 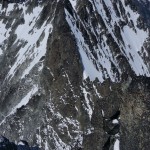 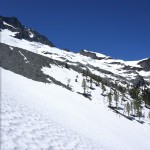 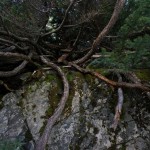 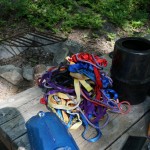