Sacajawea is the highpoint of the Wallowas, another small but prominent range in this new-to-me corner of the country. After days of dreary drizzle, I finally manned up, put on the rain jacket I found last month, and headed out to do the peak wet. Other hikers on the trail were evidence that hiking in this sort of weather is “normal” in these parts, and the precipitation never got worse than light drizzle. However, any water combined with Pacific Northwest-level humidity starts my inevitable slide toward mildew and trench-foot. 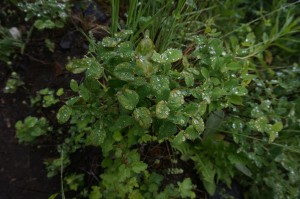 After forays to a couple of trailside campsites, I found the unmarked trail leading to Thorp Creek, along with a well-maintained pair of logs to cross Hurricane Creek. The trail heads up the left side of some small stream before it makes an awkward crossing and becomes a well-defined series of switchbacks climbing through relatively open forest, eventually gaining a lower ridge between two higher ones. 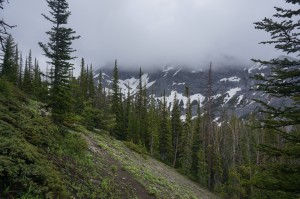 Despite the clouds, I was warm enough in just a t-shirt, with drizzle, dew, and sweat combining to make all my clothes uniformly damp.

Eventually reaching an open valley, I recognized Sacajawea’s standard route, a north-ish ridge hooking east near its base. 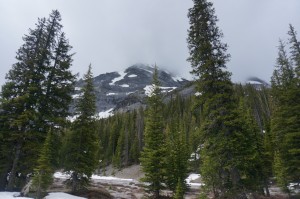 Though the old Forest Service trail disappears, cairns and bits of use trail continue along the ridge, as expected for a range highpoint. I followed the ridge blindly into the clouds, at some point putting on my wool overshirt and rain jacket to form a humid cocoon. 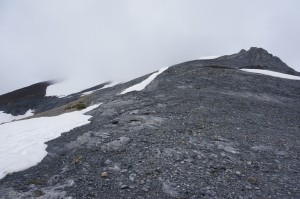 Sacajawea and its neighbors are made of various friable rock, some red, some gray, all rotten and liable to fracture into loose scree, through which the ridge forms the least-bad path.

Fortunately there was only one possible path, and a red can containing a fairly new register, because visibility along the ridge was never more than 100 yards. I signed the register, looked around for a minute or two, then retraced my steps. Some openings between cloud layers allowed good views of the valley below, but the clouds never opened up to give me a view of the surrounding peaks and ridges.

Reaching the valley, I briefly found the trail, then lost it, and headed off cross-country on a line I thought would soon intersect it. Do not do this! As best I can tell, the trail stays well right (northeast) of the valley floor, while I strayed closer to the stream. I followed various game trails, hoping they would intersect with the main, human one, and side-hilled in the hope of crossing it. While I had hoped for a quick, fun run back to Hurricane Creek, I spent over two hours in what became a grim, steep bushwhack with highlights including getting “streamed out” in a steep, V-shaped valley. I eventually reached the base 1/4 to 1/2 mile above the log crossing, and was at least lucky enough to head downstream far enough to find it. Good practice for the Cascades, I guess. 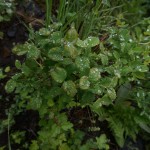 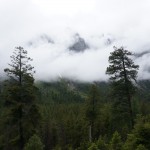 West side of Hurricane Creek 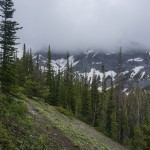 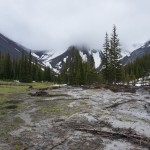 Broad valley at end of trail 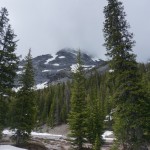 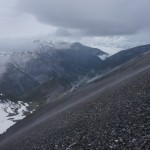 View down Hurricane Creek from ridge 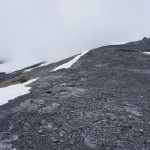 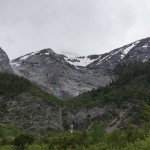