Babel, She and He Devil 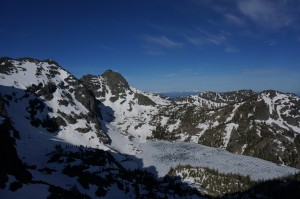 The Seven Devils are an odd little clump of mountains on the eastern side of Hell’s Canyon, the surprisingly-deep Snake River gorge separating Oregon from Central Idaho. Thanks to an amazingly well-maintained Forest Service road from the Idaho side reaching over 7,000 feet, all the peaks are easily accessible as dayhikes. She and He Devil are the co-equal regional highpoints bounded by enough deep valleys to give them over 5,000 feet of prominence; Tower of Babel was in the way. 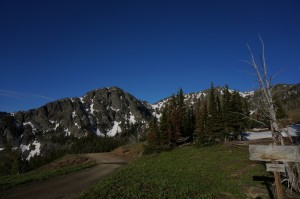 Starting from the hiker parking, I passed through the mostly-empty campground, then wandered through the woods southwest toward a snow-chute. The summer trail passes near here, but was mostly covered by snow. After bypassing the steepest snow on some rocks, I followed bits of trail west, side-hilling to the higher north-south ridge. 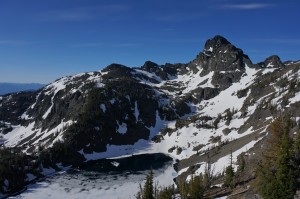 I wasn’t sure exactly what was what, so I followed bits of use- and game-trail south along the ridge toward the obvious peak. 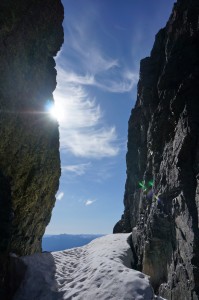 Where the ridge narrowed and steepened, things got surprisingly tricky thanks to multiple gendarmes and steep gashes. After some exploration on mossy but more-solid-than-it-looks rock reminiscent of the eastern Cascades, including some easy 5th-class downclimbing through one notch, I reached the summit of what I learned is Tower of Babel. From this vantage, She and He Devils were obvious to the west. Large summit cairns were clearly visible on some other nearby peaks, and no doubt it is possible to link up all seven “Devils” in a day, but I did not have the will.

After an extended moss-and-choss session, I reached the saddle with She Devil, from which cairns and bits of trail lead along the north side of the ridge to the broad summit. 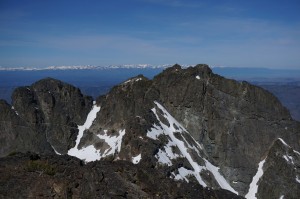 The traverse to He Devil looked somewhat tricker. After causing myself some difficulty on another step in the ridge, I passed the inviting couloir down from the She/He saddle, and followed more choss and mossy 3rd class to a giant cairn on He Devil. 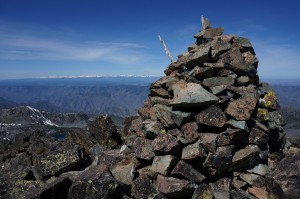 Like the other two peaks, its register showed it to be well-visited but, for some reason, almost never before July. 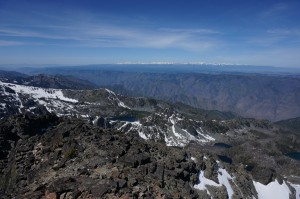 Looking west, I could not quite see the Snake River in its gorge, which is slightly deeper and far less impressive than the Grand Canyon. Farther west, the snow-covered Wallowa Range, my next destination, was clearly visible. South and east lay many peaks in Idaho which looked higher than He Devil, but which probably fell short of 5,000 feet prominence by being connected to Borah by a high plateau.

After chickening out on a steeper couloir, I returned to the saddle and made a quick glissade north to the shore of a large lake. After an ascending traverse toward what seemed like the way back, I found a bit of a well-established trail, lost it again, and crossed my original north-south ridge somewhat south of the traverse back to Windy Saddle. From there, I retraced my steps, boot-skiing most of the way into the campground and returning to my solitary car at the trailhead. 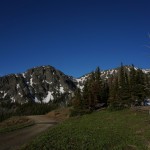 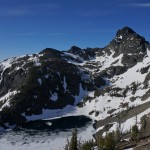 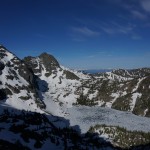 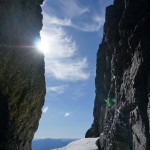 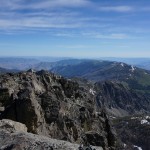 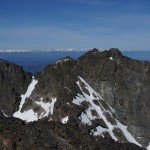 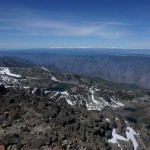