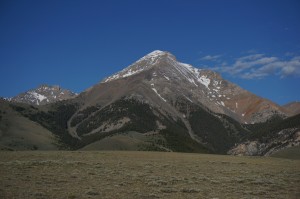 The highpoint of the Lemhi Range in southeast Idaho (named for a Mormon prophet?), Diamond is one of Idaho’s three ultra-prominence peaks. It is also one of nine peaks in the state over 12,000 feet, making it popular with the locals. This part of Idaho is basically Nevada done right: “pines, not spines.” It shares Nevada’s basin-and-range topography (hence the ultra-prominence), but the flora are grass and low sage in the valleys and northern evergreens above instead of unpleasant spiny things and junipers.

After sleeping in the middle of nowhere, I finished the drive to the “trailhead” (i.e. “end of the road”), where I found one pickup truck already parked. The route up the east ridge is obvious, and travel would be easy even without occasional bits of use trail. The first part of the route is an easy hike through open terrain and sparse woods. Above this, the ridge turns to loose scree for a brief stretch, then narrows to some fun class 2-3 scrambling on mostly-solid rock. I passed two groups on the way up: a man with his two kids, and a group of five men, two of them packing pistols. In all my outings, this is only the second time I have encountered armed hikers, which I still find strange.

I met yet another group on the summit, three guys working on the Idaho 12-ers. They asked when I had started, and were surprised to learn that I had taken half as long as they had to reach the summit. I was also pleased to find that I am physically ready for my main objectives, as 4000+ feet in 2 hours is good for me when not consciously trying for speed.

After hanging out on the summit for a bit, I headed back down the ridge. With some hesitation, I asked one of the armed men why he was carrying a pistol, carefully avoiding a political discussion, especially after his throwaway line about having a Constitutional right to carry it. I learned that he saw nature in a way alien to me, inserting himself in the food chain: the pistol was to defend against the threat of bears and wolves, while he would carry a rifle or bow to hunt elk later in the season. With the exception of grizzly bears, I tend to see animals as scenery, not food or threats; I worry more about falling off things, or things falling on me.

Jogging the last bit, I was back at the car before noon, ready for the long drive to the other side of the state. 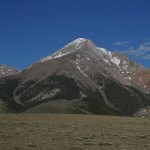 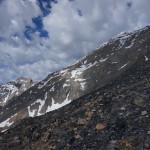 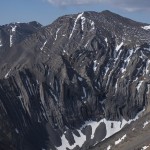 Folded rock to the south 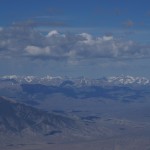 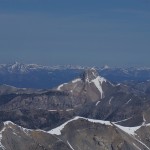 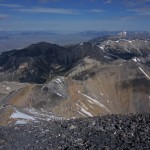