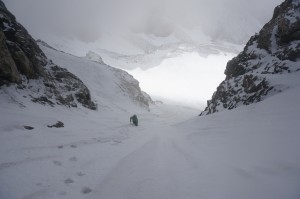 [This out-of-order entry is the last of this year’s Teton outings. After a bit more tourism, the type II fun will begin. — ed.]

Of the three classic Teton ice couloirs — the northwest on the Middle Teton, the Enclosure, and the Black Ice — the first is the easiest to both reach and climb. It is also still mostly snow this early in the season, making it easier as long as the snow stays frozen. However, I hadn’t climbed any ice in awhile, and the next day’s weather looked cold but otherwise dubious, so it seemed likely to be plenty challenging and fun.

With even worse forecasts for the next few days, Josh and I set out at the ungodly hour of 3:30 AM with spikes and tools. I hadn’t climbed with Josh before, but he seemed solid and came with a reputation for speed. After a moonlit grind up Burnt Wagon Gulch and a pre-dawn trip up the switchbacks, we reached the meadows in Garnet Canyon just as the sun hit Cloudveil, then put on crampons for the winter route to the moraine. 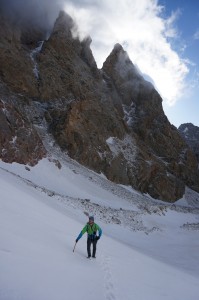 The standard approach to the couloir follows the trail to the Lower Saddle, then winds south along Middle Teton’s north ridge. However, the saddle is normally a frigid wind tunnel, so I chose to take a more direct-looking snow chute to its left. 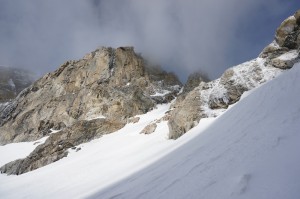 This proved to be both fun and direct, as it leads directly to the notch near the base of the route, and involved some steep, hard snow finishing with a vertical mantle. After exploring a bit to the left — probably the start of the north ridge route — I returned to the saddle and followed Josh around the west side of the ridge, where the couloir became obvious despite the enveloping clouds. 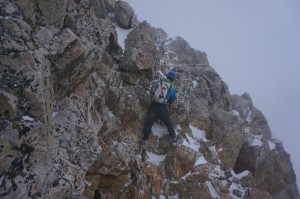 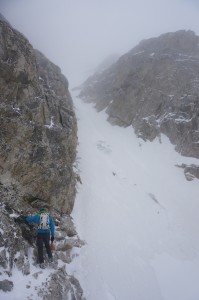 We mostly climbed side-by-side up the couloir, choosing our own lines or waiting to follow the other if he had found a better option. The couloir was still mostly snow, but hard from the cold night, and with the occasional ice bulge for fun. With the clouds, it was impossible to judge how much climbing remained until we were nearly at the top. I opted for a bit of gratuitous spice by climbing up a narrow runnel until forced to traverse out to its right, then scrambled up the remaining easier snow and rock to the summit. 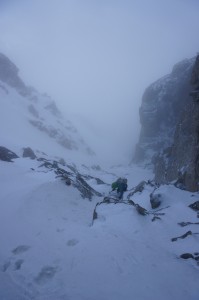 After a snack and some time spent enjoying intermittent views of the Grand and some friends ascending the south fork of Garnet Canyon, we headed down the standard southwest couloir. This was mostly hard snow, though only a few sections merited face-in downclimbing. The clouds cleared as we descended and we were treated to a spectacular view of Icefloe Lake, west of the Middle-South saddle. 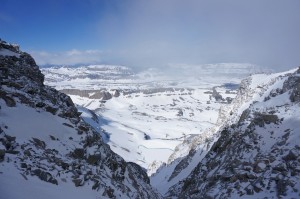 The final, traversing descent to the saddle involved some messy loose snow over hard-pack; I ran heedlessly across, while Josh exercised more caution. 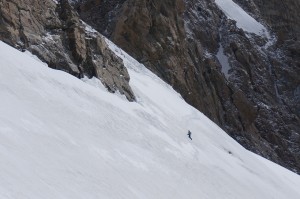 Just below the saddle, we waited no more than 5 minutes for Pam, Eric, Kate, and Mitch to catch us, then hiked with them up the mixed talus and softening snow of the South Teton’s northwest ridge. 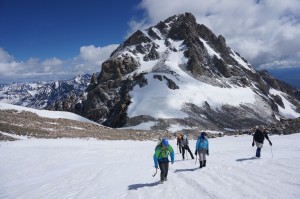 Hiking up toward South Teton

After the cloudy and intense morning, it was a pleasure to stroll in the sun and catch up. We eventually met an old boot-pack, which helped in crossing the harder snow leading to the summit scramble, a straightforward mess involving fresh powder over loose rocks. After sharing other people’s food on the summit (as usual, I had packed just enough for myself and had nothing to contribute), we took some photos and separated for the descent. 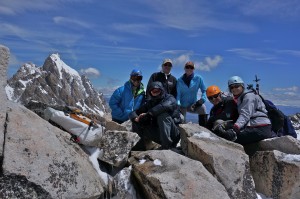 I headed straight down as soon as I reached snow, executing a rough and clumsy boot-ski, then looked back to see Josh just behind. The others appeared to be taking a safer (i.e. slower) course, so we abandoned them without a second thought, skiing, sliding, and hiking to the meadows, then taking both shortcuts down to the Burnt Wagon junction. From there to the Ranch, we both retreated into our own worlds of private boredom and/or foot pain. 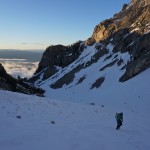 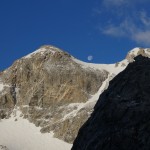 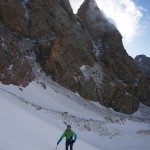 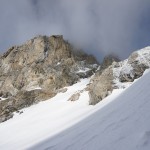 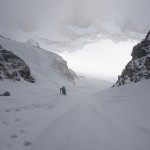 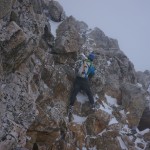 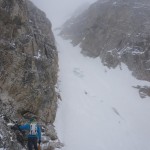 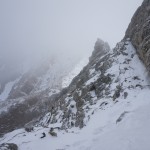 Back along traverse into couloir 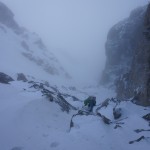 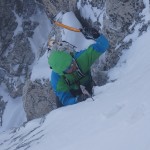 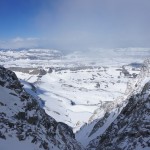 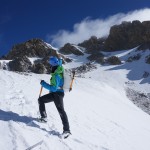 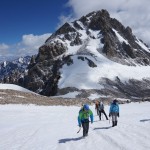 Hiking up toward South Teton 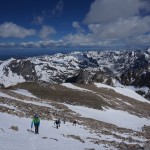 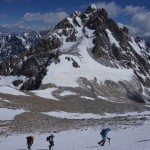 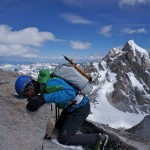 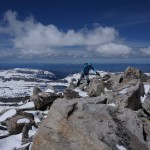 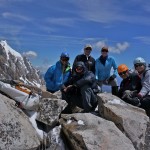 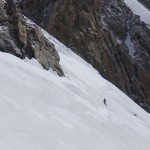