The Sandinista Couloir is a steep, aesthetic line that is seldom climbed due to its remote location on the southwest side of Mount Moran. Since this was a good snow year, and I am familiar with the bushwhack approach from traversing from Thor to Moran two years ago, I thought I might give it a try. Unfortunately I managed to walk right by it, and instead climbed some other couloir that deposited me on the ridge between Thor and Moran. Call it an “adventure.”

I got the standard north Tetons start from String Lake, reaching the 4-way trail junction north of Leigh Lake at the end of headlamp time, and headed south to the ranger cabin before turning west along the lakeshore.

The trail seemed a bit fainter than last year, with a few more downed trees, but it was familiar enough for this not to matter. Remembering to stay near the shore, I found the expected mix of old trail, game trails, big deadfall, and moist bushwhacking. Passing the base of the CMC route on Moran, I headed up the CMC couloir to get around some brush, then descended slightly into Leigh Canyon to pick up the cairned climbers’ trail to Moran’s south buttress.

Continuing past the buttress, I started up the east (Moran) side of the broad talus slope into the Thor-Moran cirque, pausing for 20 minutes to hide from a morning rain squall under a rock. I eventually downclimbed into a broad snow gully — in retrospect, Moran’s southwest couloir — where I put on crampons and climbed up along the south buttress to where my snowfield branched and narrowed. I saw one gully that roughly matched the Sandinista route description — steep snow, a rock step, a straight couloir, and a rock exit to the ridge — but did not recognize the surrounding terrain, including another couloir to its north.

Climbing out the northwest side of the gully, I spied a Y-junction below that might be the southwest and Sandinista couloirs. A bit of tricksy downclimbing on rock and turf got me to the junction and, after proceeding up the right-hand fork for a few hundred feet, I realized that I had taken a wrong turn. However, I figured this couloir would probably work as well, so I continued up moderately steep, shaded snow through a couloir and left along a broad ledge.

Near my couloir’s junction with what I later found was the Thor-Moran ridge, I spied a funner, narrower snow-and-ice gully to the right, and decided to have some fun.

After some fun climbing on a mixture of snow and ice up a slot no more than 8 feet wide, I reached a moderate-sized chockstone at the top. After a bit of experimentation, I managed to stem high enough on the sides of the couloir to find a hold above the chockstone and mantle through.

A short scramble got me to the ridge, where I immediately recognized my location as somewhere near the Zebra, only slightly more than half-way from Thor to Moran. Cursing ensued.

Having done this traverse two years ago, I knew what to expect: moderate class 4-5 climbing on sometimes-terrible rock. Stowing my axe and crampons, I grimly set off to do the job. The climb was as remembered though the morning’s rain had frozen onto the final, shaded pitch to Moran’s summit plateau, forcing me into a different route that ended in an awkward chimney. Annoyed at my poor route-finding, I found a sheltered spot on the summit, ate the last of my food, and lay down for an hour-long nap on this surprisingly warm day.

Finally rousing myself, I proceeded northeast to the head of the Skillet Glacier for the (type I) fun part of the day. While it is often necessary to downclimb the steep top pitch, I found a deep layer of slush, and was able to take it as a sitting glissade, occasionally rolling to one side to let the accumulated slush avalanche behind me pass. Once the slope lessened, I switched to my preferred mixture of sliding steps and boot-skiing and, 30 minutes from the top, I was at the base of the snow, 4000-5000 feet below.

30 minutes from top of Skillet

Past experience paid off again, as I picked up the climbers’ trail on the north side of the valley, and returned to Bearpaw Lake with very little bushwhacking. 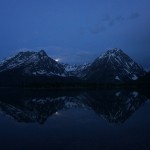 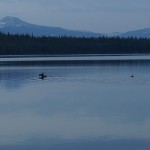 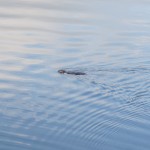 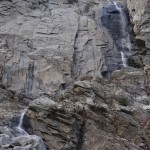 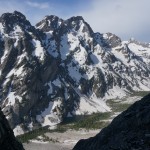 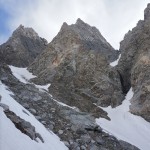 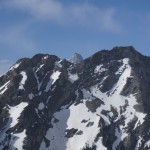 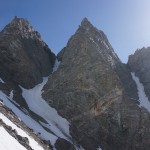 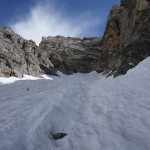 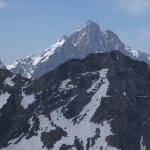 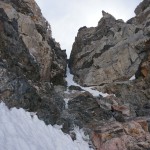 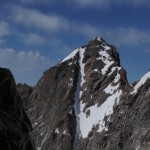 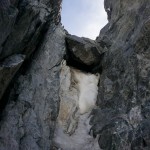 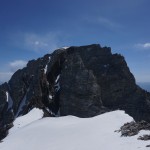 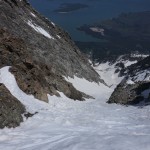 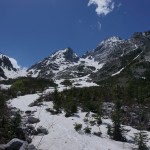 30 minutes from top of Skillet