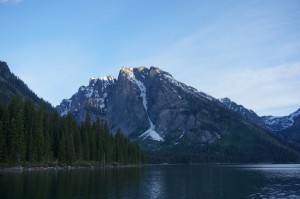 So much hardship for such a small peak…

Other than Veiled and the many minor spires (Gilkey’s, Teepee Pillar, etc.), I have more or less run out of summits in the Tetons between Death and Moran Canyons. Since Moran Canyon and parts north are effectively a grizzly bear preserve with no maintained trails, it can be both difficult and intimidating to expand my range north. Bivouac Peak, at the eastern end of the north side of Moran Canyon, is one of the easiest northern Teton peaks to reach, though “easy” is relative. Though I had hoped to combine it with nearby Traverse, inclement weather stopped me after just Bivouac.

After my second 3:30 wake-up in a row, I drove up to String Lake and was on the trail by 4:20. I was feeling too sluggish to run by headlamp, but hiked at a brisk pace, reaching Bearpaw Bay just before sunrise. As the sun rose over Jackson Lake, I made my way along the rocks, bogs, and downed logs of the beach. 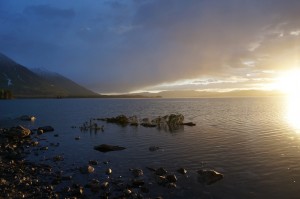 At the final impasse near the south side of Moran Canyon, I bushwhacked up to a well-established game trail, forced my way through the recent avalanche debris, then continued on the trail to Moran Creek.

I had come prepared for the ford: I put on my wading shoes, rolled up my pants, and started across. After testing the main channel upstream of the lake and finding it too fast, I forded where it slowed entering the lake, and was dismayed to find a hip-deep channel. Finally emerging on the other side, I stripped off my pants, wrung them out, and had a snack while I pretended that they dried. 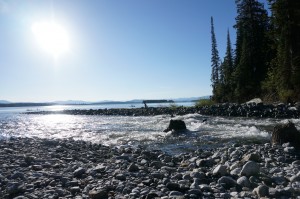 Failing to find the hoped-for abandoned trail on the north side of the creek, I made my way toward Bivouac’s east ridge, finding game trails where I could and bushwhacking miserably elsewhere, immediately soaking my shoes and pants to the thigh. I eventually reached an aspen/brush slope leading to the ridge, where I made my way up some game trails, then up steeper slopes, pulling on various plants to keep from sliding backwards on the wet ground. 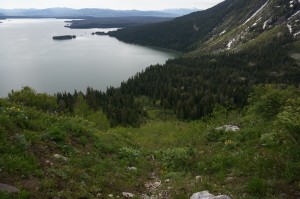 Moran Bay from bushwhack to ridge

Finally reaching the ridge, I was greeted by sunlight and a good, snow-free game trail. I wrung my socks out once, followed the trail up the slope some more, then wrung them out again. 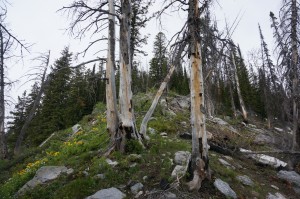 Though the ridge was mostly snow-free, I did have to cross a few minor and one larger snowfield. A short way into the latter, I looked up to see a mountain goat watching me with characteristic disinterest. I took a few pictures, then scuttled over to some 3rd class slabs leading to the where the ridge flattens. 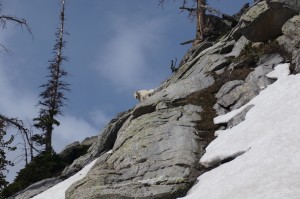 Thinking I was near the summit, I was disappointed to find a series of false summits and pinnacles. I climbed the first head-on with a few class 4 moves, then wove around the rest. Most of the climbing was straightforward, though I did have a scare on some wet, sloping, lichen-covered slabs. The long-threatening clouds had finally engulfed the ridge and, as I neared the apparent summit plateau, I found myself in a blizzard.

Reaching a cairn at the plateau’s west end, I saw that the ridge toward Traverse Peak looked more complicated; I had neither the gear nor the desire to traverse it (twice) while wet in a blizzard. 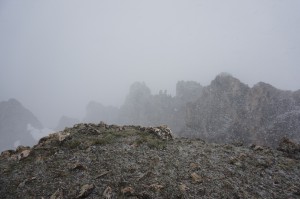 After enjoying the summit for all of 15 seconds, I dove down the couloir leading back into Moran Canyon. This turned out to be perfect for a barely-controlled boot glissade, and I quickly slid from snow to drizzle. As promised in the guidebook, the bottom of the couloir was blocked by a large and tricky chockstone. Fortunately I was heading down, and there was still plenty of snow below, so I was able to downclimb a few low 5th-class moves on the wet rock to one side of the chockstone, then jump to the snow below.

After more boot-skiing, I whacked my way through some freshly-drenched bushes, and was pleased to find the abandoned Moran Canyon trail near the creek. Not finding any suitable log to cross to the south, I followed the trail back to its outlet into Jackson Lake. My clothes were already as wet as they could get, so I simply hung my wading shoes around my neck, grabbed my axe in one hand and a stick in the other, and started across the creek. I chose a different line farther from the outlet, but still found the same crotch-deep channel.

I spent the rest of the hike back consistently damp, running most of the trail to minimize boredom. Stopping along Leigh Lake to doff my jacket, I discovered that the mosquitoes are very active and hungry. Bring your DEET or move fast, folks. 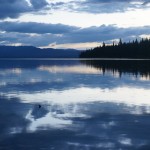 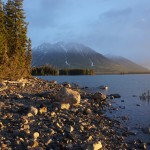 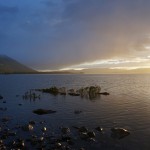 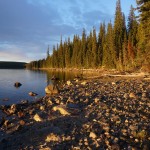 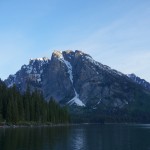 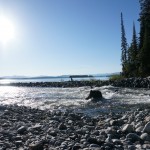 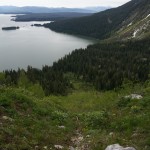 Moran Bay from bushwhack to ridge 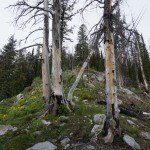 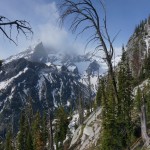 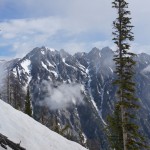 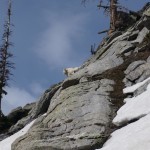 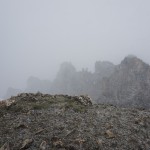