Yes, Owen again: Scott wanted the summit, and I wanted a look at the Fryxell route (which includes part of the traverse between Owen and the Grand). The 4:00 AM start was uncomfortably early, but at least I didn’t have to see much of the Burnt Wagon Gulch trail as I cruised up to Surprise Lake. The Amphitheater Lake trail disappears under snow shortly after the Garnet junction, so I put on boots and crampons and made my way straight up the ravine.

Reaching Surprise Lake a bit after 6:00, I met Scott outside his tent, where he kindly brewed me a pot of coffee. We then took off for the Teton Glacier, passing Amphitheater Lake to reach the non-obvious ledge/slope past the northeast side of Disappointment Peak. 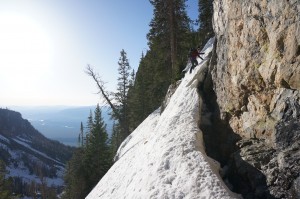 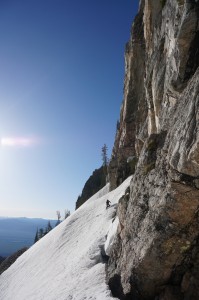 Later in the season, this route is a well-traveled and easy climber’s trail, but now it is a slightly treacherous side-hill across a steep snow slope. Unsurprisingly, no one had been by since my exit a few days earlier.

Crossing under the Grand and entering the glacial cirque, Scott was feeling tired and moving slowly, so he decided not to continue to Owen. I continued alone up the bottom of the Koven Couloir, then turned left onto the series of benches comprising the first part of the Fryxell route. 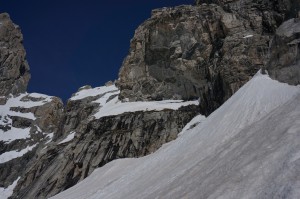 Though it was in the sun, most of the snow was still pleasantly firm, and there was no rock- or ice-fall from the upper snowfield. The two steps between the three benches were melted-out enough to require a bit of scrambling on wet rock, but none of it was long or difficult. 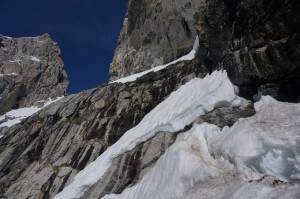 Some of the steeper snow on the inside of the bench had to be climbed facing in, but most of the traverse was straightforward side-hilling. Along the way, I passed a surprising amount of tat for easy terrain on a non-standard route. 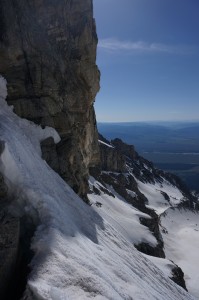 Nearing Owen’s southwest ridge, I had an illuminating view of the Grand’s north face up close and in perspective. While scary head-on, it looked much more approachable from this angle; if I make it back here later in the season, I will have to try climbing it. 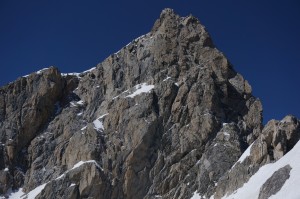 Sticking my head over the ridge, I found cold wind and dry rock, so I ducked back east to take off my crampons, then made my way around the west side of the first tower between me and Owen. I must have done something wrong, because while Fritiof Fryxell was supposedly not a particularly strong rock climber, I ended up doing some surprisingly delicate and exposed climbing to reach the notch northeast of the tower. After a bit of traversing, I climbed a leftward hand crack, then did some delicate traversing around the corner to reach the gully below the notch. In retrospect, easier climbing might be found either by staying lower around the west side of the tower, or returning high to the east side. 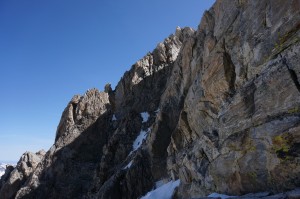 From the notch, I returned to the east side, where I found fun, blocky class 3-4 climbing the rest of the the way to where the Fryxell and Koven routes join at the west edge of the upper snowfield. 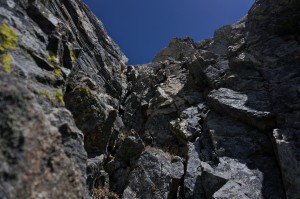 Having just summited a few days before, I skipped the final scramble up the summit knob and started down the Koven. While the summit snowfield was at least as awkward and treacherous as before — runnels of slush over hard-pack — the couloir had firmed up enough to be climbed facing inward most of the way down.

After crossing the glacier, I picked up Scott where he had been napping on a rock, then packed up a bit of his camping gear before boot-skiing down toward Burnt Wagon Gulch. Taking the gully from Surprise Lake and skipping the switchbacks saves lots of time and leads directly to the lower shortcut on the Garnet Canyon trail, even if it does make me a bad person. 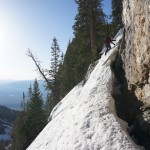 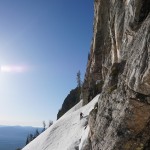 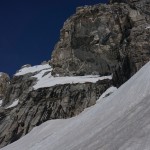 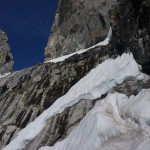 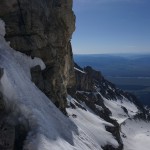 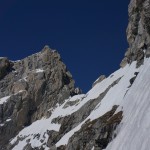 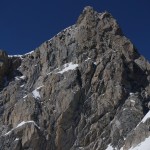 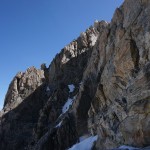 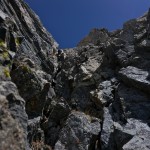 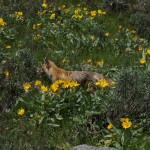