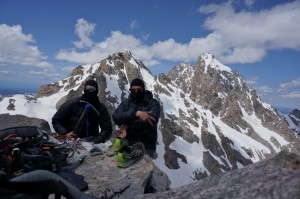 Having learned that neither of my regular climbing partners would be in the Tetons while I was there, I figured I would not rope up at all this season, or indeed in the foreseeable future. However, it turns out that there are several climbers around, including a couple I know from previous years, so I may actually do a few roped outings this month. While I do not see roped climbing becoming a significant part of my life, it is good practice, and therefore worth maintaining the necessary skills.

Sitting around the kitchen near the end of Work Week, I was surprised to meet both Andy and Jamie, an intern and cabin-mate from last season, both of whom climb and are living in the area this summer. Jamie had Saturday off, and I had no plans, so we eventually settled on Armed Robbery, a “grade IV” 5.8 on the south face of Cloudveil Dome. Reluctant to wear rock shoes in the cold, we set off at a leisurely 5:00 AM, when there is no need for headlamps. We passed a pair of skiers on the way to the meadows, where we saw another climber heading toward the Lower Saddle. It was a surprisingly busy day for so early in the season.

The approach climbs to the col between Cloudveil and Nez Perce, then descends a few hundred feet before dropping west into a loose red gully to reach the broad, sloping plateau at the base of the route. After roping up at what we thought was the correct start, I led as we simul-climbed to nearly the base of the crux pitches, where I ran out of gear and got tired of fighting rope drag. After moving the belay to below the obvious overhanging pillar, Jamie led the first pitch of the crux, a hand crack leading to a steep face protected by a crack in a dihedral to its right. Having created some bad rope drag, he belayed me up to an uncomfortable, shady anchor.

I led the second part, up a short, broken face to a much better belay spot, then up an excellent almost-fist crack (perfect for a #3 cam), then right via a couple of thin moves to some stemming in a steep dihedral. All of this climbing was excellent, on solid golden granite. Seeing a perfect boulder to sling, and chossy wandering ahead, I belayed from here, then coiled the rope for an apparent scramble to the summit. While belaying Jamie, I noticed a large rockslide into Taminah Lake which may be new this year.

After much walking, the summit actually required one more pitch of roped climbing. We decided to start up a ramp near the left edge of the face, which proved to be less than ideal. The short pitch looked easy from below, but actually involved a couple of exposed moves on unpleasantly loose rock. From there, it was a simple walk to the summit. In retrospect, we could have found more challenging climbing by starting farther west, and more solid rock by staying farther right to the summit. No matter what the route, however, this is not a grade IV climb. As it was, the small amount of real climbing was hardly worth lugging the gear up 5,000 vertical feet. Oh, well.

The snow was too soft to boot-ski on the way down, but not the bottomless slurpee I had feared. Burnt Wagon Gulch, however, was even more endlessly loathsome than I had remembered. Only three more times this season, I hope… 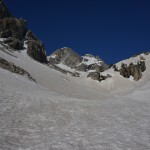 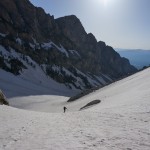 Slogging up from Meadows 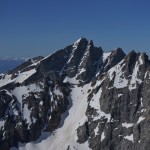 Buck and Wister from Cloudveil col 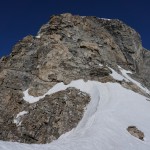 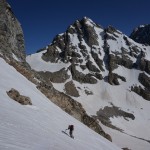 Nearing Cloudveil col with Middle and Grand Tetons behind 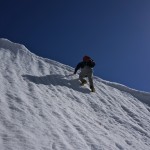 Steep drop into other side of col 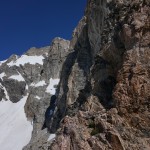 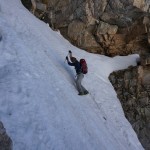 Cutting steps to the route 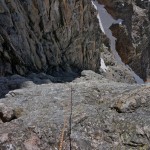 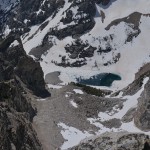 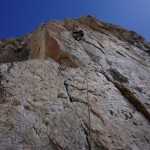 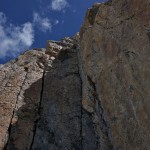 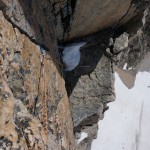 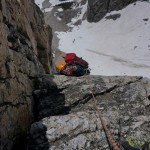 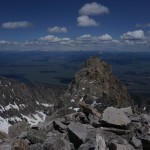 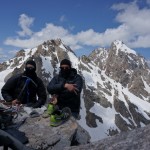 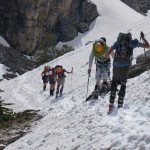 Getting crowded in Garnet