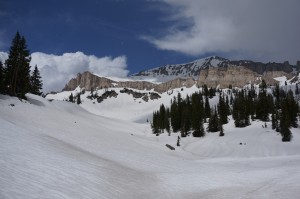 (Have faith, gentle and patient readers! The “fitness tourism” part of my season is almost over. After a hiatus to earn my keep and bum around the Tetons, the time of headlamps, suffering, and Real Mountains should begin in mid- to late-June.)

Sitting in the small but nice Alpine library after a short and unmemorable trip up Haystack Peak, looking for things to do for the next few days, I noticed that one possible approach to Doubletop Peak, the Gros Ventre Range highpoint, was not too far out of my way. I was disappointed that the library did not have Turiano’s guide to the area peaks — most of its selection seemed to be self-help and pulp — but fortunately I was able to preview the relevant pages on Amazon. I copied down the directions, then drove out toward Bondurant, turned on the Dell Creek road, then drove a couple miles up a semi-rough side-road before stopping to camp near a locked gate.

Looking again at my map and the directions the next morning, I realized I was on the wrong road. Returning nearly to the Dell Creek road, I took another fork at the same turn-off and, after two miles of ruts and deep mud, reached the fence corner Turiano mentions, where the continuation of the road has now ceased to exist. From this point on, the guidebook’s route was correct, though the trail is sometimes difficult to follow.

For those who might want to do Doubletop from this direction, here are a few tips: After turning off Dell Creek road, immediately turn right — do not go past the hay-storage building. Especially when wet, this road requires both high clearance and four-wheel drive. The trail from the fence corner to the Dell Creek junction is easy to follow, but easy to lose in the open sagebrush-meadow shortly after that. Look for a lone tree with a blaze, then continue well east in the meadow to pick up the trail where it re-enters the woods.

Anyways… Dell Creek was raging in the warm weather, but fortunately there were logs at both crossings, the first popular with the local squirrels. After a long hike, I reached the sulfurous spring near the head of the canyon and headed up and east, first on game trails, then on snow. Reaching the highpoint of a ridge, I descended slightly, then headed north along the bench between Doubletop’s lower and upper cliffs. Like much of the Gros Ventre range, the upper cliffs are made of some kind of terrible rock, here carved into myriad fins and towers.

Fortunately it was still early season, and I was able to take advantage of snow to climb the gully separating Doubletop from a lower fin to its south. From here, I followed the ridge northwest to the summit, staying on the narrow strip of rubble between the western cliffs and eastern slush-slope. One short stretch of 3rd class to avoid a step in the ridge was sketch-tastic. I can’t imagine enjoying this range without snow.

From the snow-covered summit, I could see most of the rest of the Gros Ventres and, in the distance, the Winds to the southeast and Tetons to the northwest. With plenty of time, I decided to add nearby Triangle, at the cost of another 1500 or so feet of climbing. Originally planning to climb its west ridge, I noticed a tricky-looking step as I descended Doubletop, and instead headed for the south slope. Fortunately a snowfield extended most of the way to the east ridge, because this loose talus face would be somewhere between aggravating and impassable when dry.

Reaching the summit, I took in the red cliffs in the Union Pass area, Doubletop’s less-impressive east side, and potentially threatening clouds to the southwest. Time to skedaddle! Doing so involved plunge-stepping and skiing down Triangle, then climbing back 500 feet to the other side of the notch I had used to reach Doubletop. Though I felt a bit of graupel, the clouds kindly held off. From the notch, I chose to take what I thought might be a faster line down the valley floor, hoping to lose elevation quicker and maybe save some time. This turns out to be a bad idea, as the valley narrows to a dirt “V”. At least I managed not to slide into a creek this time… I found the sulfur spring by scent, where I picked up the trail for the long hike/jog to the car. 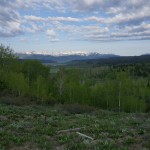 Wyoming Range from near trailhead 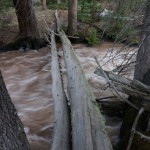 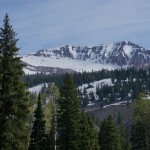 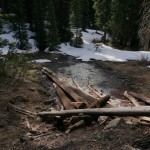 Sulfur spring near end of trail 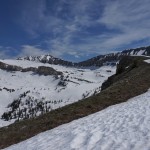 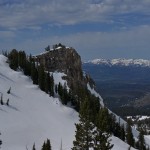 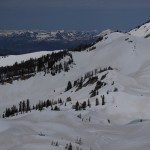 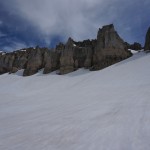 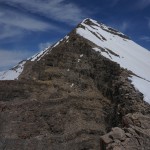 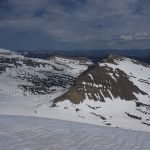 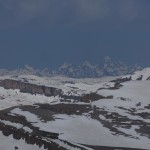 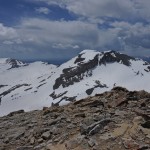 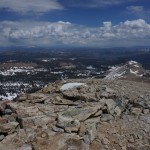 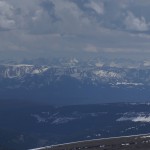 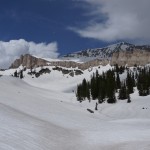