Hole in the Rock, Pilot 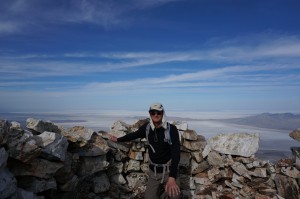 This was the first of two “snow, drive, four-wheel drive, desert” days, turning pairs of easy peaks into full days.

Hole in the Rock, named for the obvious feature, is the highpoint of the East Humboldt Range, which is really just a northern extension of the Rubies. After camping as high up the dirt road as I could reasonably drive, I hiked the remainder to the Snotel station, near a marsh at the base of a broad cirque. Both the hole and the route to the summit — up a couloir to its north — were obvious from here, but it was less clear how best to deal with the mixture of slush and brush between me and the couloir. I ended up doing the worst thing possible on the way up (high and south, with high-angle slush), then finding the right thing to do on the way down (low and north, with moderate brush).

A recent wet avalanche in the couloir had scoured off the top layer of slush, but it was still slow going, so I climbed the rock to its left where possible, occasionally kicking steps across or wading through bits of snow. Reaching the ridge, I was surprised to see two high-altitude coyotes exiting the couloir. Even on the ridge the snow was a slushy mess, so I stuck to the rock near the sheer south side where possible. I had hoped to traverse south over the hole, then tag the next named peak south, but I was almost immediately stymied by a large gap in the ridge, vertical-to-overhanging on the other side. Passing this gap would require descending several hundred feet to one side or the other, and I was not sure I could easily regain the ridge after that, or that I would not run into similar problems farther on. Instead, I returned the way I had come, reaching the car around mid-day, and moved on to the next thing.

Pilot is an ultra-prominence peak rising over 5,000 feet from the western edge of the Great Salt Desert. After a brief stop in the depressing town of Wendover, I drove into Utah, then back into Nevada on the dirt road leading to Pilot’s east side. I forgave my car its poor mileage, as I was able to follow the increasingly rough dirt road up Miner’s Creek all the way to its end, saving me 1000 feet of desert-hiking.

Pilot is a giant, brushy rubble-pile, and the climb is a matter of finding the path of least resistance for about 4000 feet. While I saw a few cairns, I never found a real trail, despite a survey crew having built a pack trail in the 19th century. I followed the south (shady) side of Miner’s Creek for awhile, then crossed into the sun where a solid rock rib climbed the north side. I followed this rib, more solid and open than the surrounding slopes, to the main north-south ridge, then continued along that to the summit, crossing several intermediate humps. I found my rhythm on the climb, and was pleased to reach the summit in 1h40, a good early-season ascent rate given the terrain.

I found the usual desert register mailbox on the summit, as well as a half-dozen or so rock structures, some of which were supposedly built by the survey crew. The snowy Rubies are visible to the southwest, Ibapah to the southeast, and to the east, the white wasteland of the Salt Desert, with its black, desolate “island” peaks. After some loitering, I made a leisurely descent, then made the trippy drive across the Salt Desert at dusk before finding a place to sleep. 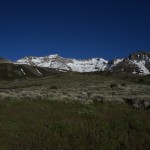 Hole in the Rock from camp. 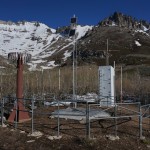 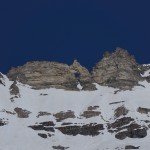 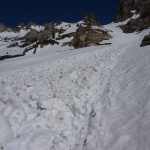 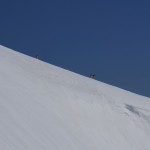 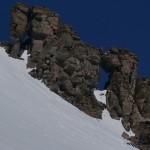 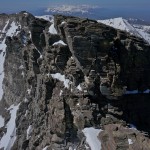 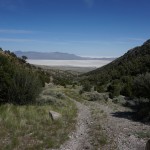 End of the road to Pilot 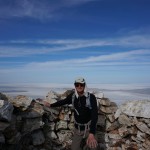 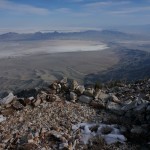 View of trailhead and Salt Desert