Waking up near a train track, I set out for another “snow, drive, four-wheel drive, desert” day. First up was Deseret, an ultra-prominence peak southwest of the Great Salt Lake, the highpoint of the Stansbury Range. On a clear day, five other ultra-prominence peaks are visible from its summit: Pilot, Ibapah, Flat Top, Nebo, and Timpanogos.

After driving past several popular and smoky campgrounds on Memorial Day, I reached the trailhead at the end of the road in South Willow Creek. The trail toward Deseret’s south ridge was popular and obvious for awhile, then the tracks diverged as people tried to find the least-painful way through the soft snow. I gave up on the trail, climbing some loose, brush 3rd class to a ridge on the right, then making my way along its dry side. High along the crest, I came upon a couple camped on a flat spot, having evidently been driven to this strange spot by the horrid slush.

From the ridge, I traversed some occasionally thigh-deep slush to the base of the twin couloirs, and found a nice fresh boot-pack up the left-hand one. Shortly after starting up, I met and thanked the man who had installed the stairs. Thanks to this good Samaritan, I made quick work of the couloir, then reacquired the trail for the rest of the hike to the summit. The birds I had seen circling the summit were not the ravens one might expect, but a flock of 50 or so seagulls, wheeling and shimmying as they fed on the moths swarming above the summit. I lay on my back for awhile, watching their aerobatics and appreciating the strangeness of the situation (movie).

Not wanting to retrace my steps, I descended north down the ridge, avoiding the snow where possible, then tagged “South Willow” before returning to the saddle where another trail climbs Deseret from the north, where I surprisingly found a decent boot-ski most of the way to the valley. Not seeing any trail from where the skiing ended, I bushwhacked downhill on some game trails, then thrashed through the woods in the valley until I stumbled out onto the trail, right in front of the camping couple I had met earlier. I jogged back to the trailhead, doffed my wet socks, and drove across the valley to the Oquirrh Range for the next peak.

After creeping through the ersatz Old West town of Ophir, I eventually found the South Fork road to Flat Top. Again thankful for high clearance and a granny gear, I crept up a fairly awful jeep road to 8000 feet, saving myself a long, hot walk. Surprised to find another car at this obscure trailhead, I located the trail and started another desert hike. Reaching a fork at a saddle, I arbitrarily chose to go left, and soon regretted the decision. This trail heads into the woods on the west side of the ridge, where it disappeared in a morass of mud and slush. Fortunately, the owner of the other car had also come this way, and I was able to follow in his steps until I emerged from the woods on a steep, brushy slope.

The climb from here to the ridge was steep and efficient, with ample game trails through the brush. I regained a faint human-trail on the ridge, then followed it an unexpectedly long way to the summit, where I met Alexander, who had kindly made the steps through the woods. After talking a bit, we headed back, opting to follow the ridge in order to minimize time spent in the woods. Based on a few cairns, there seems to be another human-trail along the ridge, though it is barely more than a game trail on this obscure summit. This trail eventually becomes the right branch of the fork I found on the way up, and is probably a better way to climb Flat Top when there is snow. 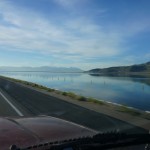 Weird scenery along I-80 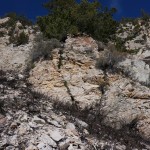 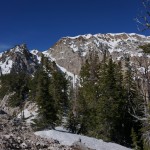 Couloirs and Deseret from ridge 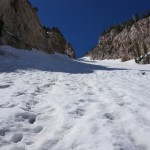 View up the stairs 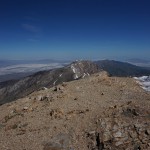 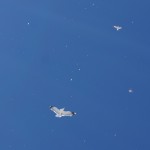 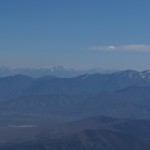 Oquirrh and Wasatch from Deseret 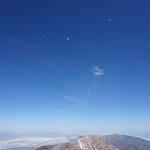 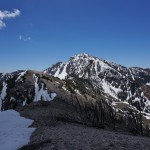 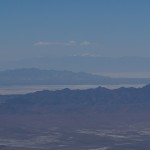 Great Salt Desert and Ibapah in the distance 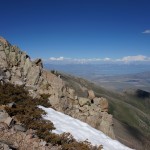 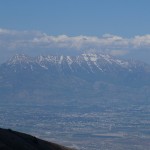 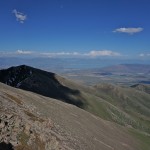