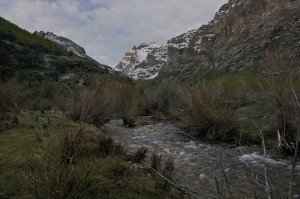 For my last day in the Rubies, I had planned to do Gilbert and Sullivan Silliman (and had even contemplated the obvious joke). Unfortunately, yet another warm night made almost everything slush, and I can only tolerate so much of that. The traverse over “Mazamas” to Sullivan looks interesting, though, as do several other nearby ridges in this area of intersecting glacial valleys.

I got started at 6 AM, hoping to reach the northeast-facing snowfield that is the obvious route up Gilbert before things got too grim. Bob mentions taking a trail on the east side of the stream and fording back higher up, but fortunately the ad-hoc wooden bridge system near the trailhead was partly submerged, so I tried an apparent trail staying on the west side of the raging river. This trail seems unofficial but well-traveled, with frequent cairns and well-established tunnels through some of the dense vegetation, finally ending at a snowfield below an avalanche chute. Bushwhacking up this canyon would be a nightmare.

The avalanche runout was soft but firm enough to walk across in running shoes, but other snowfields were slush. I put on snowshoes near a large cascade, then put in 2,000 feet of wretched slogging. Though I occasionally managed a few steps on the surface of the snow, I spent most of the climb either punching through soft crust, sinking a few inches into slush, or backsliding when the surface cut loose. At the first opportunity, I crossed to Gilbert’s northeast ridge, where I wrung out my socks and considered the rock ahead.

From below, the ridge seems to have two large gendarmes, and I was afraid that I would be cliffed out on the uphill side of the first. However, both turned out to be well-behaved, and the climbing — steep, exposed, easy third class — soon cheered me up after the endless slog. Reaching the summit with a final 100 yards of snowshoeing, I looked southwest to Silliman and felt a distinct lack of enthusiasm. Dry or with good snow, the scramble over Mazama would probably be fun. However, it looked like much of the climb on Sullivan would be on east-facing snow, and the tricky traverse off Gilbert (the connecting ridge has a big vertical-to-overhanging step) would be wet and slushy. Not today.

Instead, after a nap, I wallowed, slid, and glissaded back down the northeast side. I was surprised to see a boot-pack joining my snowshoe-tracks partway up. Though I never saw the person making it, I suspect he was a local skier, as he seemed to know where to go, and did not just follow me to the ridge. I met two other groups lower down — the only humans I have seen on the trail in four days in the Rubies, or indeed since Elwell last week, and probably the last I will see for awhile. 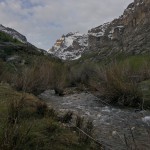 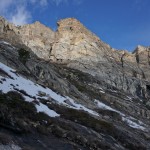 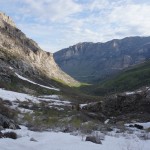 View back down valley 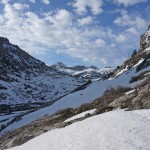 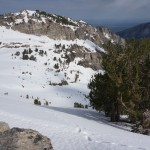 End of the slog. 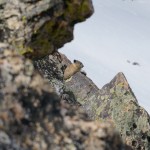 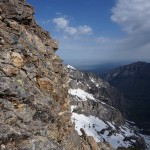 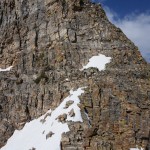 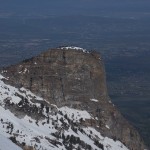 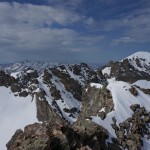 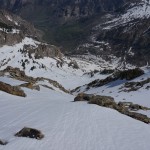 View down the slog 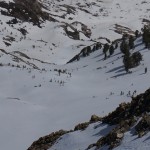