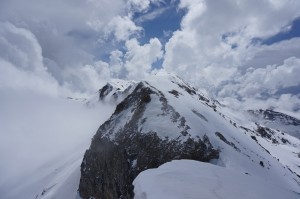 Ruby Dome is the highpoint of the Ruby Mountains, southeast of Elko. Nevada’s most alpine range, they are said to somewhat resemble the Sierra Nevada. The highest, northern part has been thoroughly carved by ancient glaciers. Unlike most Nevada ranges, which look like someone dumped a pile of rocks in a flat wasteland, the Rubies are split by an impressive network of deep, U-shaped valleys, with little subsequent V-shaped stream erosion. With their glacial valleys and horns, they remind me of Glacier National Park, but with better rock and desert brush.

After camping a few miles away, I drove to the locked gate that is Ruby Dome’s inconspicuous “trailhead.” Dawn revealed ominous clouds above the mountains, and the forecast promised more bad weather, but I hopped the fence, walked through the private campground, and found a well-signed trail leading along the creek toward Griswold Lake and Ruby Dome. I had chosen to bring snowshoes, and was glad that I did; the snow started below the lake, and the previous day’s rain and a warm night had created a top layer of unconsolidated sludge.

Circling the lake, I fought my way to the saddle to its east, then crossed the bowl toward Ruby Pyramid, thinking to keep my peak-bagging options open. The clouds had fortunately failed to materialize, and I was able to get a view of the terrain from Gilbert to the east, to Ruby Dome immediately west. Finding the traverse to Gilbert unappetizing, I headed back west to Ruby Dome, where I found a massive summit cairn.

The clouds had obscured Ruby Pyramid, but did not appear threatening, so I decided to continue west to Lee Peak before heading down. Passing a couloir I had seen from the approach, I noted that it would work for the descent, then continued on to Lee’s summit, awkwardly climbing a couple of rock steps in snowshoes.

Descending, I was dismayed to find clouds rapidly rising from the valley, engulfing my just as I reached my couloir; visibility was instantly reduced to “useless.” Unlike elsewhere, the snow in the couloir was too hard to kick steps with my snowshoes, so I slid into the void in self-arrest position, then glissaded until things flattened out more. I spent awhile heading generally downward in uniform whiteness, occasionally glancing down at myself to give my eyes some variety.

Still well above the lake, I emerged below the clouds, and the rest of the return was straightforward. The mid-day thunderstorms formed behind me amazingly quickly, though, and I jogged the road back to my car as the thunder-hail started. 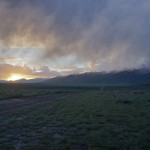 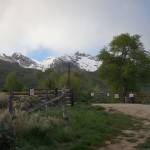 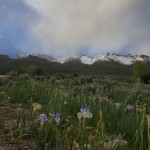 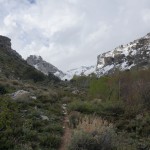 Ruby Dome (back) from valley 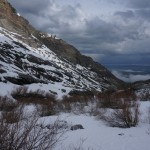 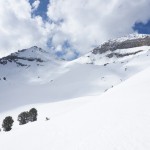 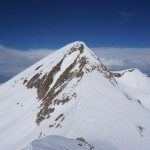 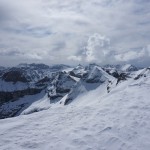 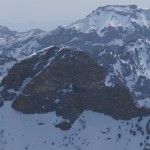 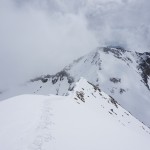 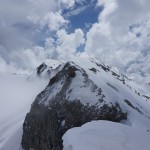 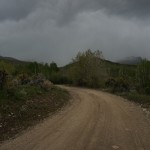