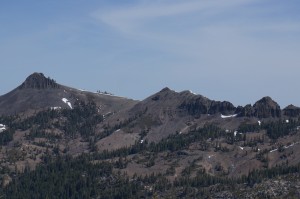 The final two SPS peaks west of Lake Tahoe, Granite Chief and Tinker Knob, are less impressive but fortunately easier than the Desolation tour. The well-maintained Pole Creek road leads most of the way to Tinker Knob’s summit in the summer, and even now is drivable surprisingly high. I hiked the remainder of the road, then took off in a semi-random westward climb through the slushy forest, eventually emerging on the ridge well south of Tinker Knob.

One of the advantages of approaching these easier peaks without much information is that it can lead to some interesting discoveries. This time, I discovered some unusual scrambling along the ridge among small basalt hoodoos, leading to a plaque declaring one high-point “Billy’s Peak.” From Billy’s, some loose traversing got me to the PCT, which passes right next to the Knob. I found several wind-breaks and other rock structures on the summit, but no register; after a few minutes, I returned to the PCT and followed it south into the valley toward Granite Chief.

I lost the trail under snow partway up a long ridge, and continued on the obvious, long, slushy climb to Granite Chief. It’s not a great peak, being no more than a half-mile from a ski lift on the other side, but at least it has a nice nap rock where I could rest while my socks dried a bit. Rather than return via the PCT, I crossed to the ridge south of “Billy’s”, which I followed north a bit before crossing to its east side and following another jeep road north. Once far enough north, I left this road to the northeast, following some fresh bear tracks to regain the road leading to the car. 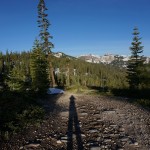 Tinker Knob (r) from the start 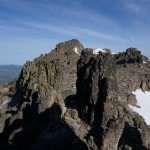 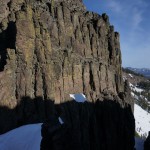 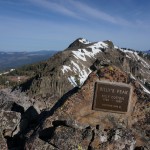 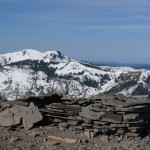 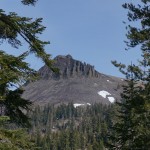 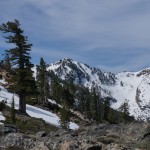 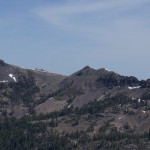 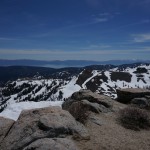 East to Tahoe from Granite Chief 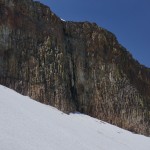 Columnar rock on the return 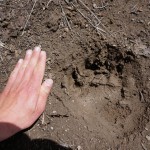