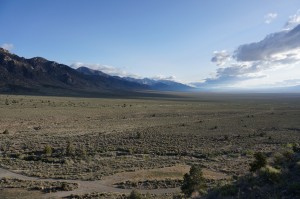 Jefferson and Arc Dome are two ultra-prominence peaks on opposite sides of a valley dominated by a giant tailings pile. This valley connects US-50 (“The Loneliest Highway in America”) to US-6 near Tonopah (“The Saddest Town in America”).

Jefferson is thoroughly mediocre, a broad dirt mound with jeep tracks leading most of the way to a summit festooned with weather station stuff. I camped in the ruins of Jefferson, an old mining settlement consisting of ten or so stone buildings of various quality, in various states of decay. I probably could have driven most of the road from there to the saddle south of Jefferson, but granola bars are cheaper than gas, and I was tired of driving. I walked the road to the saddle, where somewhat fainter jeep tracks on both sides of a fence lead up Jefferson’s broad south ridge. The Toquima Range is extremely dry, so there is little vegetation to give one a sense of scale, and the walk up the ridge seemed interminable.

Reaching the summit, I found two sets of weather gear, the older one from the 1960s abandoned, its box left unlocked as a convenient shelter. I tried to take a shortcut down a side ridge on the way back, but got “desert cliffed out” (i.e. ran into steep thorn-bushes and talus) and was forced to retrace my steps, jogging most of the road.

Arc Dome was probably my favorite outing on this trip through Nevada. The peak itself is just a big pile of loose rock, but harder rock intrudes in the lower part of the eastern side of the Toiyabe Range: white granite domes to the north, and some dark metamorphic-looking stuff near Arc Dome. Starting from the valley floor, I followed the South Twin River trail through a pleasantly lush box canyon containing some old mining equipment. Near where the trail dies out, Arc Dome comes into view to the northwest. I followed sporadic cairns to a ridge, then suffered my way up all kinds of loose awfulness to the summit.

Rather than return the way I came, I decided to follow the main trail north from Arc Dome, then try to find the North Twin River trail. The head of the North Twin on the ridge is a surprisingly-steep cirque, so I descended the ridge between the North and South Twins, hoping to find a connecting trail
shown on the trailhead map. I never found this trail, but I did eventually pick up the sometimes-faint North Twin trail. Other than getting embarrassingly stuck in a cattle pasture, I had a pleasant run back to the North Twin trailhead, only a mile away from my car at the South Twin. 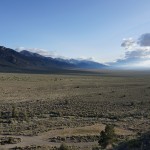 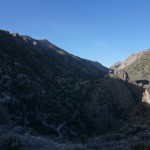 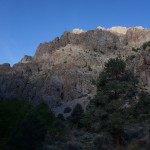 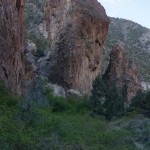 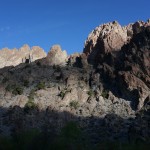 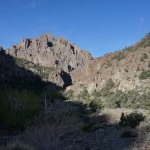 Crag at fork in South Twin 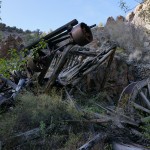 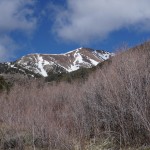 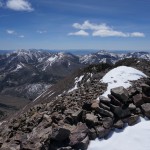 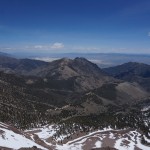 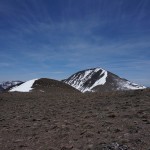 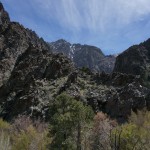 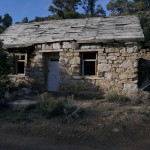 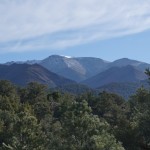 Jefferson from near town 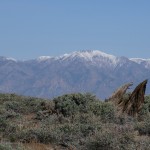 Arc Dome from below Jefferson 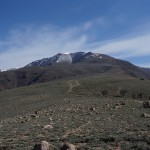 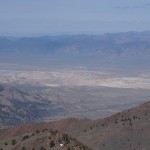 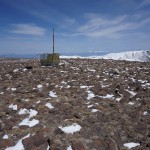 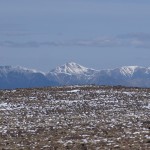