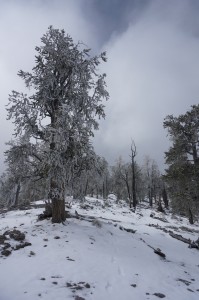 Hayford is a classic Nevada desert peak: an hour of rough dirt from the highway, then a moderate 7-mile, 4000-foot climb to the summit. After some frustrating shopping in Vegas, I drove out to the trailhead and slept next to the sturdy, informative, somewhat amateur, and mildly shotgun-damaged trailhead sign.

It rained overnight, and I woke to partly-cloudy skies and 1-2″ of fresh snow on the mountains above. The snow and clouds made for some interesting light during the 5.7-mile hike up a wash to the early-1930s patrol cabin. The cabin, which is on the National Historic Register, was renovated a decade ago, and is surprisingly vandalism-free, with a stove, intact windows, and even an air mattress for hikers’ use. I took some pictures, then continued past the spring and directly up-slope to the left, eventually meeting up with a cairned use trail.

With the clouds blocking views of the surrounding peaks, I had a bit of trouble finding the high-point where the use trail was lost under snow on a branching ridge, but eventually found my way to the summit. It was somewhat underwhelming; on a clear day, I would have had great views of Charleston to the southwest and other ranges in all directions. With the clouds, I was stuck looking at the elaborate summit weather station. Despite the difficult access, Hayford sees a surprising amount of traffic year-round from both local peak-baggers and the usual suspects. I stuck around just long enough to sign the register, take some pictures, and freeze my hands, then retraced my steps as quickly as possible.

The return to the cabin was quick, and the trail down the wash was a great slightly-downhill run. Hayford is a fun spring/fall outing. The approach road is probably not suitable for a passenger car, but a Subaru or similar would have no trouble. 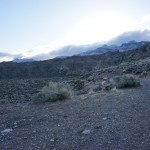 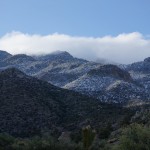 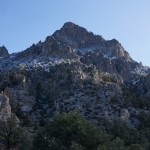 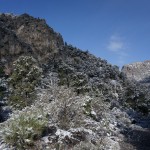 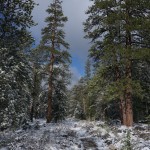 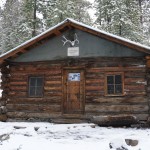 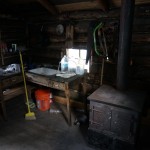 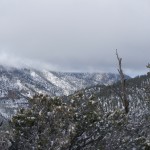 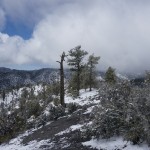 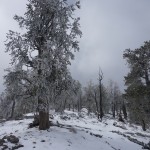 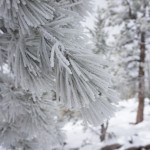 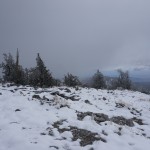 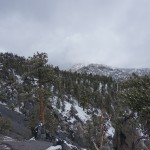 Summit from ridge on descent 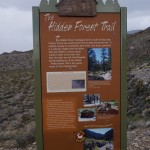