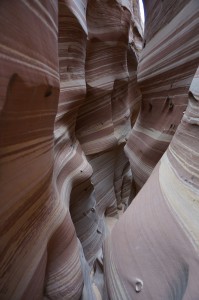 [Catching up out-of-order after extended time in the boonies. — ed.]

I wanted to do a bit more canyon exploration, and thought of checking out Death Hollow, but the slots along Hole-in-the-Rock Road broke up the drive more conveniently. This road leads, via 50 miles of washboard dirt, to an old ford of the Colorado River now drowned by Lake Powell.

The first three Gulches all feed a broad wash about halfway down the road. Thanks to a short approach, they are extremely popular — there were about ten cars in the parking lot by midday — so I had no trouble following footprints and cairns to reach the slots. After descending into the wash, I started with the first slot on the left, which I think may be Brimstone. Though it had plenty of footprints, and was probably scenic, it was disappointingly wide; this is not what I had come for.

Following various bootprints, I made my way around to the northeast, looking for an interesting or at least feasible way back into the wash. I eventually found a sharp-sided drainage that looked like it might work. I followed it up to the plateau, finding nothing of particular interest, then squeezed into the narrow, twisted mouth leading down. I was soon inching forward sideways, with my pack in one hand — this was the stuff. Partway down I heard voices, and waited in a wider chamber for three young men to pass me heading up. Shortly after meeting them, I passed through the two natural arches that are Peekaboo’s signature feature. The exit was actually a bit spicy, down some eroded steps carved into a 10-foot sandstone drop to the wash.

I followed more tracks and cairns downstream, bearing left at a fork, and soon found the entrance to the third slot. This one was probably the best of the lot, surprisingly long and narrow with high, vertical walls. After again passing the three men in a wide spot, I encountered a bit of a tricky step and a chockstone, the first thing vaguely resembling climbing I’ve done in a long time. From the top, it was an easy walk down to the wash and back to the car.

The day was young, so I decided to revisit Zebra Gulch on the way out. I had previously visited when it was full of icy puddles, and wanted to see if I could go further in warmer and drier conditions. Alas, no. After wading through a short, calf-deep entrance moat, I found that the tank that had stopped us last time was no more passable when full of stagnant muck. Checking out the canyon from above, it looks like there are further difficulties immediately above that tank as well, and that the part above the tank is not especially interesting. Oh, well. 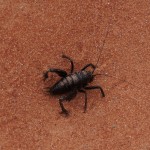 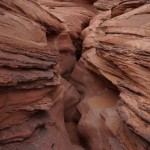 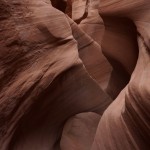 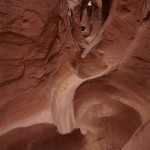 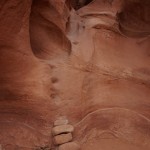 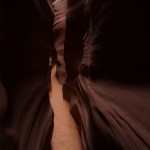 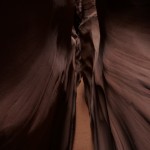 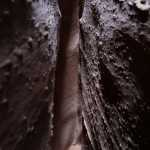 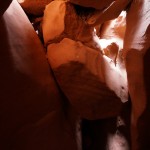 Chockstone near upper end of Spooky 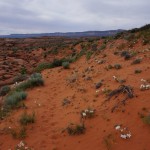 Walk back along Spooky 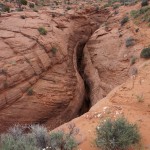 Looking into Spooky from walk 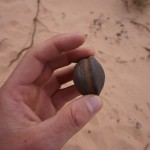 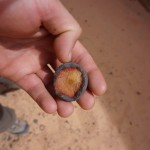 Inside of Zebra geode 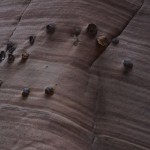 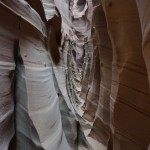 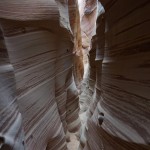 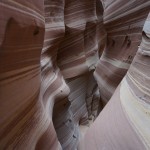 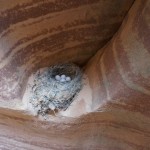 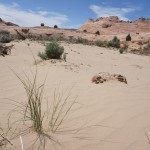 Walk back from Zebra 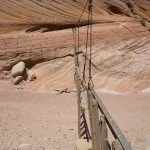 Hanging gate on return from Zebra