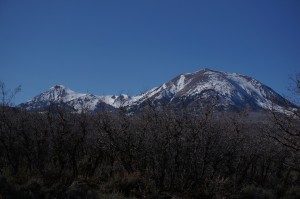 And so it begins. Having no better use for my time, I hit the road again at the end of my lease. Since I am not an Alaska-caliber mountaineer, May is best spent in the “drive-through territory” of Utah and Nevada, home to polygamist cults, gun-toting freeloading racist ranchers, and a significant number of the 57 peaks in the lower 48 with at least 5,000 feet of prominence. Though visiting them requires more driving than I would prefer, they are good exercise, and probably more interesting with some snow on them.

First up was Peale, the highpoint of the La Sal range near Moab. In the summer, a reasonable dirt road climbs to 10,000 feet, leaving a direct 2,700-foot climb to the summit. Unfortunately, Peale is also a remarkably loose talus-pile, making it better as a spring climb. I was able to follow some tracks through a few small snowbanks to drive within probably a couple of miles of the summer trailhead. Leaving my car where it got semi-stuck around lunchtime, I followed the road for a bit, then took off through the trees and brush toward Peale.

In retrospect, I should have followed the snowy couloir leading just west of the summit, but I instead chose the ridge to its east. I soon learned that any part of Peale not covered in trees is ridiculously loose talus. I took my time, stopping to check out the views east to the Elks and San Juans and west to Canyonlands, and reached the summit around 2:00. With plenty of day left, taking the couloir straight back to the car would be weak, so I traipsed on over to neighboring Tukuhnikivatz. The view, looking straight down the west side of the range to Moab and Canyonlands, was better than from Peale.

I returned a short way along the ridge, then dropped down a snowy slope. After more cross-country travel on mainly well-behaved snow, I found the road near a mystery building, and followed it back to my car, which came un-stuck with a bit of digging. Now for yet more driving… 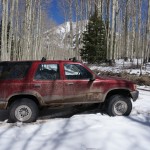 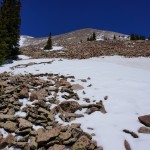 And it all moves. 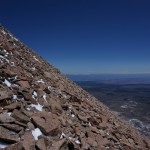 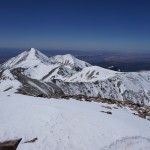 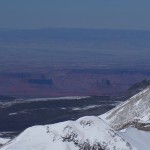 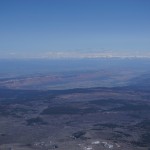 East to San Juans and Elks 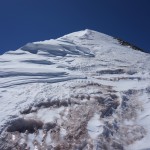 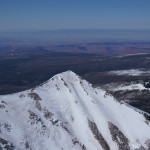 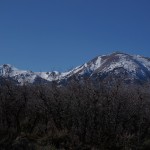