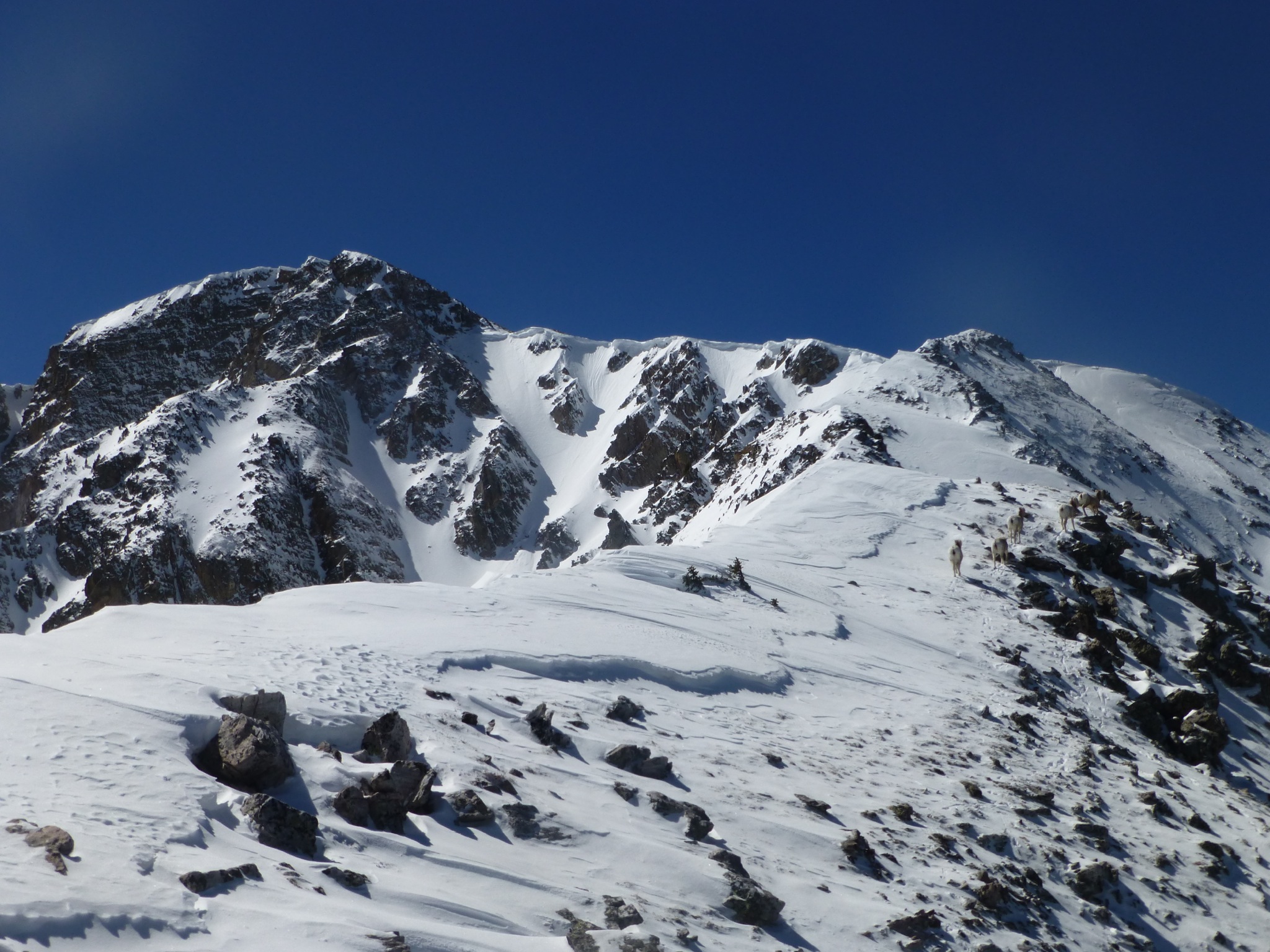 Growing up, the Truchas Peaks were the best peaks I could see from home, higher and more rugged than the Jemez and the rest of the southern Sangres. They were also harder to reach, the easiest route being a 20+-mile hike from a trailhead known for vandalism at the end of a rough dirt road. For this reason among others, I never climbed them growing up, nor during my time spent in New Mexico since then. Living nearby and owning an old, high-clearance 4-wheel-drive, I thought this winter might be a good time to finally tag them.

On an earlier attempt, I had found the way through the maze of roads between the end of what is currently drivable, at the land grant boundary, and the Rio Quemado trailhead. I had also established that I would not get far without snowshoes. Despite the incredibly dry winter down in Santa Fe, there is waist-deep unconsolidated snow below treeline around Truchas.

This time, I started out from the land grant boundary at first light, with snowshoes on my pack and plastic bags on my feet. I made quick time to the trailhead, where the helpful snowmobile track ended, and put on my snowshoes for the long slog up the north fork of Rio Quemado. I followed my old tracks — unsurprisingly the only ones — until they turned the wrong way, then flailed around in the bottom of the valley for awhile before determining that sidehilling along the north side, where the south-facing snow was more consolidated, was the best option.

After the north side of a deep cleft containing the stream, I emerged in a small meadow below the headwall at the lower end of the Truchas cirque. After trying the direct route and finding thigh-deep postholing, I climbed an avalanche chute to the north, then side-hilled across a steep, wooded slope to emerge on the northern end of the cirque itself. Though the north side of West and Middle Truchas is imposingly steep, I worried more about crossing the cirque with minimal postholing. Staying on south-facing slopes and in open areas where possible, I made my way to the base of West Truchas’ northeast ridge, where I finally removed my snowshoes.

Starting near the toe of the ridge, I clawed my way up some nasty, loose, snow-covered rubble, avoiding it where I could by playing around on some partially snow-covered 3rd class. I eventually found some wind-packed snow that allowed me to kick steps to the ridge crest. There I found the expected slow, tiring winter terrain — unpredictable and partly snow-covered talus.

Head down, focused on breathing and not slipping, I noticed a surprising number of fresh animal tracks and, looking up, was surprised to see five juvenile bighorn sheep making their way up the ridge ahead of me. I followed them the rest of the way to the crest, while they easily kept a respectful distance, impressing me with their competence on sloping, snow-covered rocks.

Where the northeast ridge joins the main east-west ridge, the sheep moved off about 50 yards to dig for food in the tundra, while I turned left to tag West Truchas’ summit. Sitting west of the main crest, West Truchas has a panoramic view of the remaining North, Middle, and South peaks, including multiple sheep trails between the Middle and South. I followed bits of these trails over to Middle Truchas, passing some giant quartz outcroppings. The ridge to North Truchas looked like it might be fun, with a couple of 3rd-class sections, but probably too long for today without incurring headlamp time.

Instead I turned south, following more sheep trails to the slightly higher South Truchas. Nearing the summit, I was greeted by the main bighorn herd — rams, ewes, and kids — eating, lying down, or watching me with more curiosity than fear. Perhaps it was just their winter coats, but the rams looked much beefier than the ones I have seen in the desert. The sheep and I ate, rested, and watched each other for awhile, then I headed back for the trailhead. Seven hours into the day, I was fairly certain I would be back by sundown, but was not looking forward to the return slog through the woods.

As it turned out, the return was easier than I expected. After a painful slog back to West Truchas, I waved at the five sheep, who had barely moved, then started back down the northeast ridge. A quick, sketchy plunge-step down a steep gully to the northwest got me back to the cirque, where I took off my overshirt and put the snowshoes back on. I was pleased to find that the warm day had caused the snow to settle, greatly reducing my postholing. I rejoined my old tracks, then mostly followed them back to the trailhead, where I stashed my snowshoes for the final run-walk to the car. With a round-trip time of 10h40, and just over 12 hours of daylight, I could probably have done North Truchas as well, but I don’t mind coming back for it. 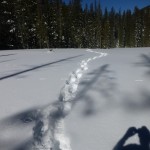 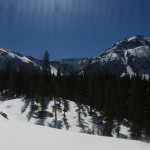 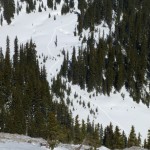 Path across cirque from ridge 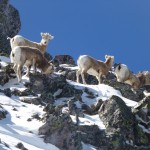 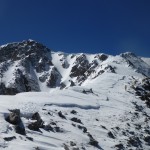 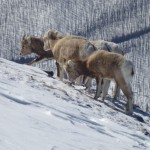 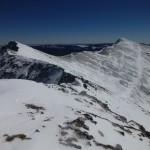 Middle and South Truchas from West 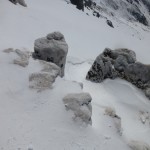 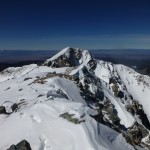 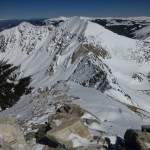 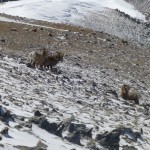 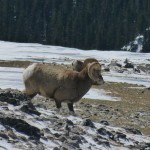 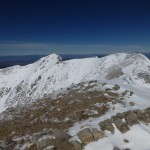 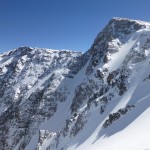 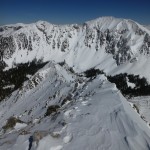 Down NE ridge of West Truchas