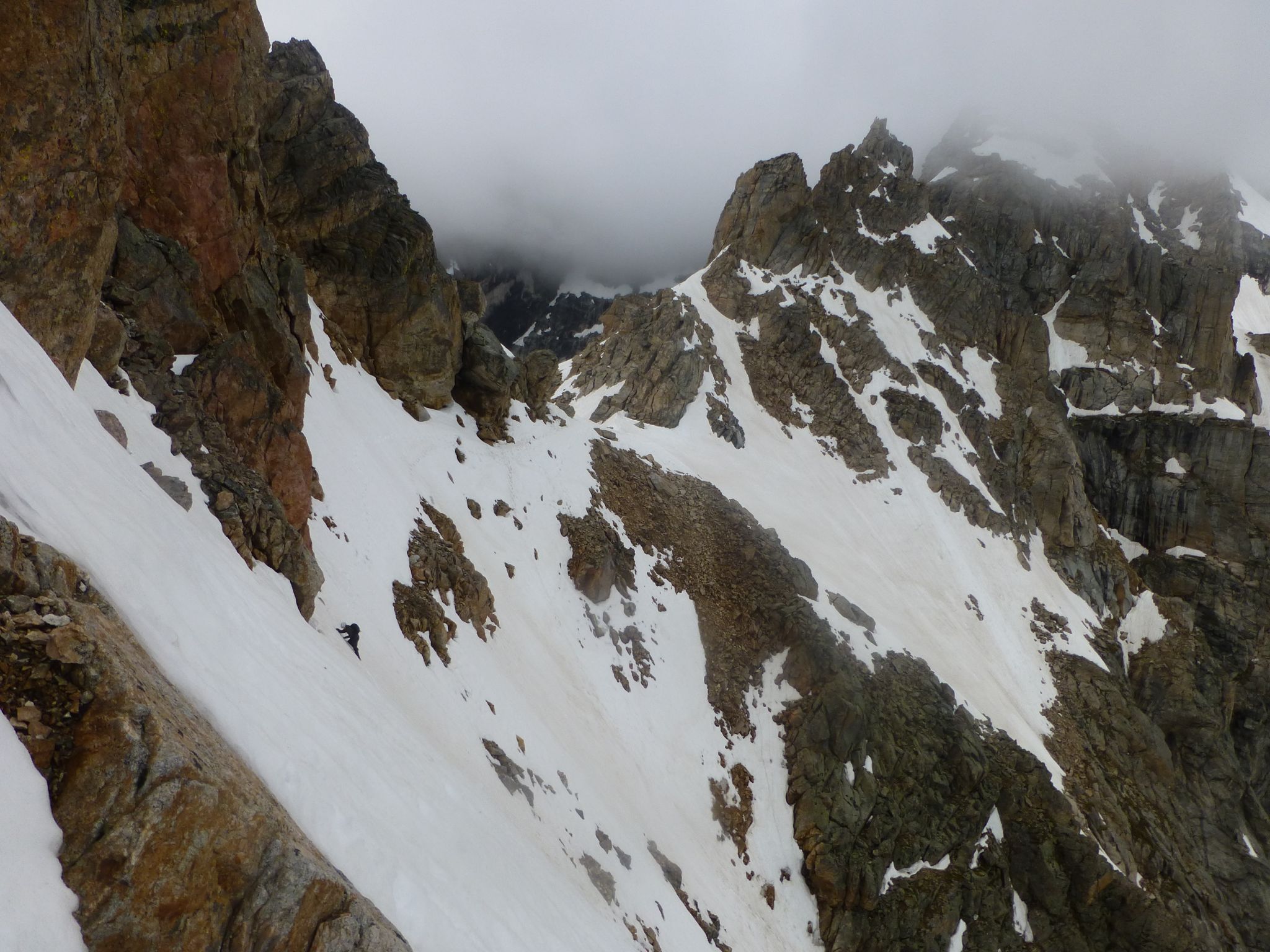 Since Noah had not climbed Owen, and I want to check out parts of the Cathedral and Grand Traverses, traversing from Owen to Teewinot seemed like a good, moderately-long day. Plus, having seen Scott off in the opposite direction the day before, I was curious how he was doing. I gathered that the west side of the East Prong might be tricky, but knew that it was easy to bail south if I could not climb it.

After the usual hike to the ridge above Amphitheater Lake, Noah and I stopped to consider the cold, gray day. The cloud-line was below Owen’s summit, but above the ridge; since it was still early, we chose to keep going and see if the weather improved. The lower Koven step was melted out, but the rocks were mostly dry. The upper couloir was mostly hard snow, with a couple short stretches of water ice for spice. Topping out on the ridge, I was surprised to find it calm and pleasantly warm. I saw no sign of Scott, and assumed he had turned around.

“Pleasantly warm,” of course, meant that the snow was mostly some variety of slush. While mostly harmless before the east side of Owen’s summit rock, the south-facing traverse around to the west side was sometimes loose and semi-treacherous. After climbing the short chimney in crampons, we found a mixture of wet rock and snow on the rest of the route, and chose to keep our spikes on for the rest of the climb, adding some spice. Crossing onto the northwest side of the summit, we were suddenly exposed to blasting winds.

We rested in a sheltered spot just below the summit survey marker, finding part of a climbing ranger’s pack, which I put in my own after pillaging it for food. The descent was much like the climb, but with colder hands from climbing wet rock with now-soaked-through gloves. Once back on the traverse south of the summit, we were sheltered from the wind and quickly warmed up.

The clouds were starting to lift as we made our way toward the East Prong. After some steep snow to the summit of the prong just east of the Koven Couloir (West Prong?), the ridge turned to mostly rock with some soft snow, making crampons unnecessary. After some 4th-class scrambling, we met several people with fancy cameras on the next prong. They had started up Teewinot the day before, and suffered a rainy bivy on some mud ledges west of their pillar. They seemed happy to spend the day shooting each other in heroic climbing poses.

We followed their tracks to the intimidatingly vertical west ridge of the East Prong (which they had rapped), then contoured left toward what seemed like a more climbable gully. We both thought it looked climbable, attacking it in slightly different ways. Partway up and a small ridge apart, we were both stymied. Noah was on golden rock perhaps 30 feet right of the gully, while I was on lichen-y rock slightly farther over. After exploring a few options, I found a chimney with positive enough holds for me to reach the easier terrain above. It felt harder than what I am normally comfortable climbing in boots (5.6?), so I did not recommend it to Noah. He tried various moves on his part of the face, finding nothing he liked. Since I did not want to downclimb what I had just gone up, we parted for the day.

After an easy scramble to the East Prong’s summit, I postholed down to the grassy plateau west of Teewinot. Here I was surprised to find a bit of a trail, which took me (as expected) straight to the gap between Teewinot’s “thumb” and “fingers.” I took the standard east face route up to the summit, then back down to the parking lot, enjoying a good boot-ski on the remaining snow. A wrong-way hike to Jenny Lake paid off when, after I returned the pack and contents (minus food), one of the rangers gave me a ride back to the ranch. 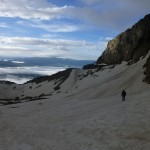 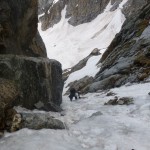 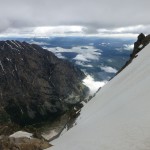 Northeast from top of couloir 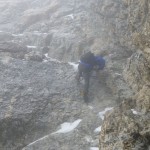 Wet slabs in crampons on Owen 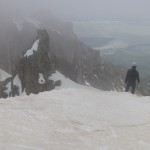 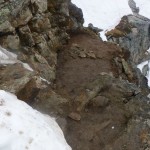 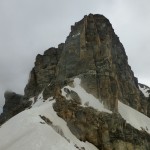 West side of East Prong 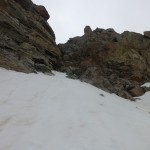 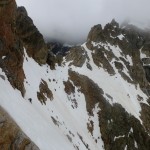 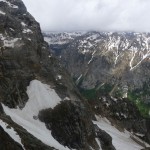 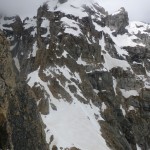 Ridge from Owen to East Prong 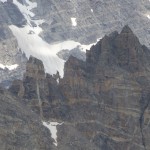 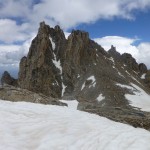 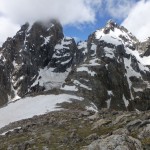 Grand and Owen from Teewinot plain