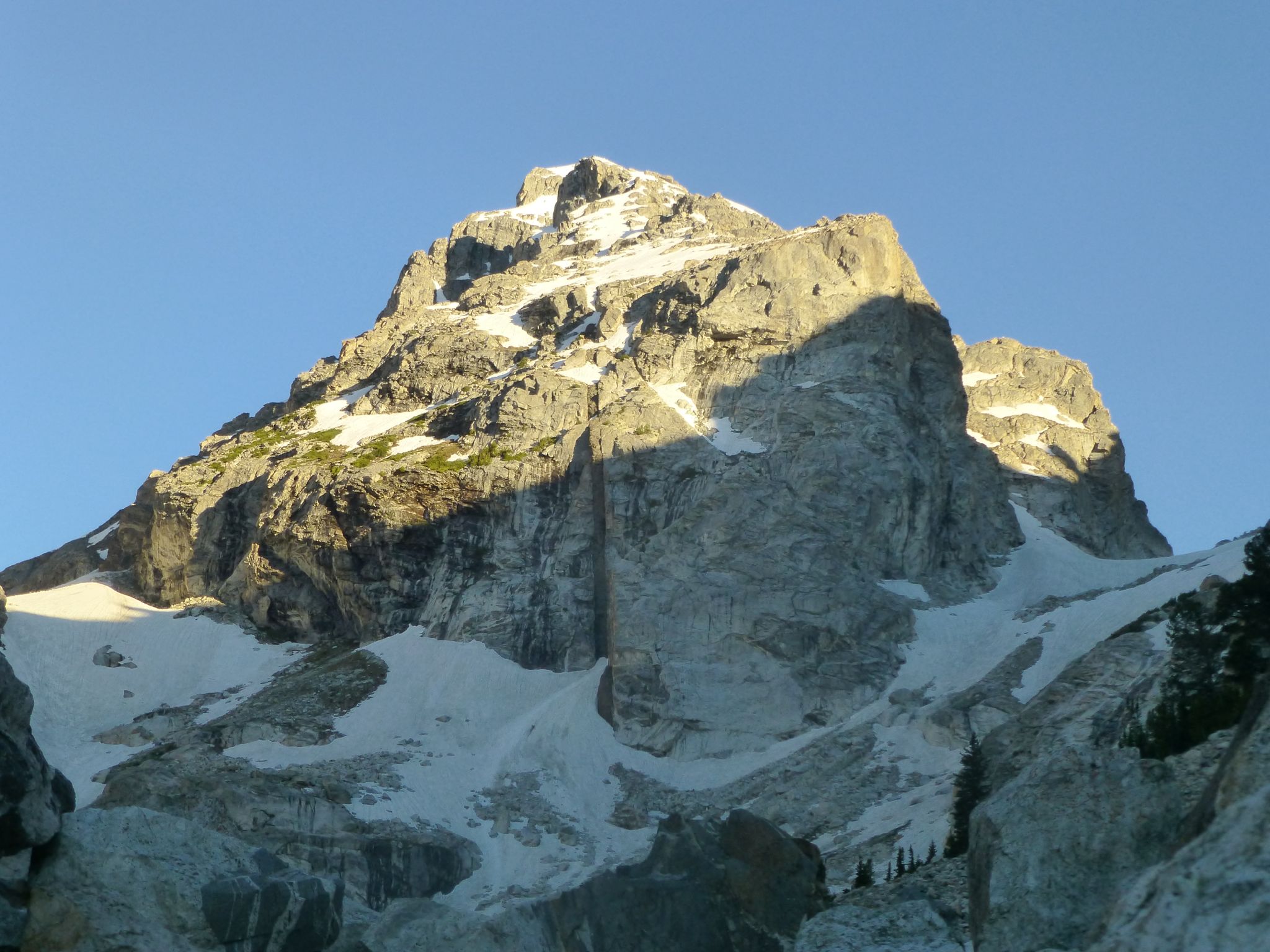 The Dike route, following the obvious stripe of black rock across Dike Pinnacle, is the longest route on the Middle Teton. Though its rating suggests that it is Serious Business, there are only a few 5.6 moves, with some 4th and low 5th class climbing before them and mostly class 2-3 scrambling after. I had been meaning to do this route for a couple of years, and had no real plans, so when Keith suggested it I was game.

I had expected to leave with a crowd headed for the South Teton at 4:30, but as is usual when more than two people try to do anything, they were delayed, so I set out on my own at 4:45. I passed through the Meadows camping area on dry ground, then reached snow and eventually put on my crampons to climb the steeper slope leading to the base of the dike. I easily crossed the small gap to the rock, then put away my crampons on a small, shady ledge, thankful that the cold, wet climbing was easy enough to do without rock shoes.

With some snow above, the dike was usually wet on one side or the other, but it is wide enough that this did not increase the climbing difficulty. The horizontal facets of the blocky rock are mostly outward-sloping, but the rock is generally solid, and fractures at sharp corners, so there are plenty of positive holds. Where the black dike rises to reach the right-hand wall, I found some 5.4 climbing to the left, then a ledge and fixed pin below what turned out to be the crux. After trying the undercling-stem-mantle in running shoes and backing off, I put on my rock shoes, pulled it without much trouble, and soon topped out.

From here to the summit of Dike Pinnacle, the dike disappeared under moderate-angle snow. Given my footwear and the warm temperatures (most of the snow was slush), I headed right and followed the drier ridge to the summit. Looking south, I occasionally caught sight of the South Teton group keeping pace in the valley below. The ridge to the west has a tricky gendarme and a step requiring a rappel, but there is a downclimb to the south that does not lose too much unnecessary elevation. After some exploration and backtracking, I found an acceptable downclimb to the obvious, partly snow-covered ledges, and found myself only 40-50 feet below the col.

I stayed on rock where I could, but still spent more time than I wanted kicking deep steps in the slush on my way to Middle Teton’s summit. Finding a comfortable perch, I wrung out my socks and sat down for a 15-minute break; had I found a larger flat spot, I probably would have napped.

I used the standard southwest couloir route for the descent, glad I was going down rather than up the horrible loose scree and dirt at the top. Once I reached the snow, I was able to plunge-step then boot-ski my way to the valley, apparently passing the South Teton group as they started up the opposite side. I probably should have caught up with them on their climb rather than heading straight for the 90-degree ranch, but I was out of sandwiches, and already mentally on the return. Passing John and Ian above the meadows, I slid and fast-walked my way home for an 8-hour round-trip. 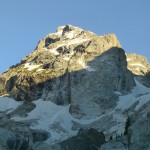 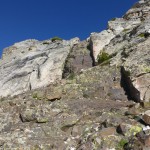 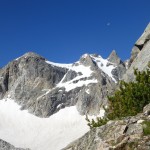 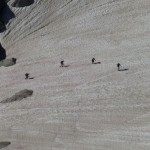 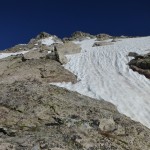 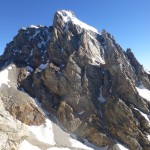 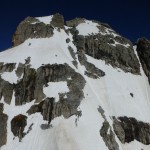 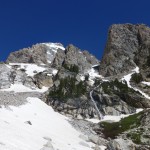 Grand and Disappointment from near meadows