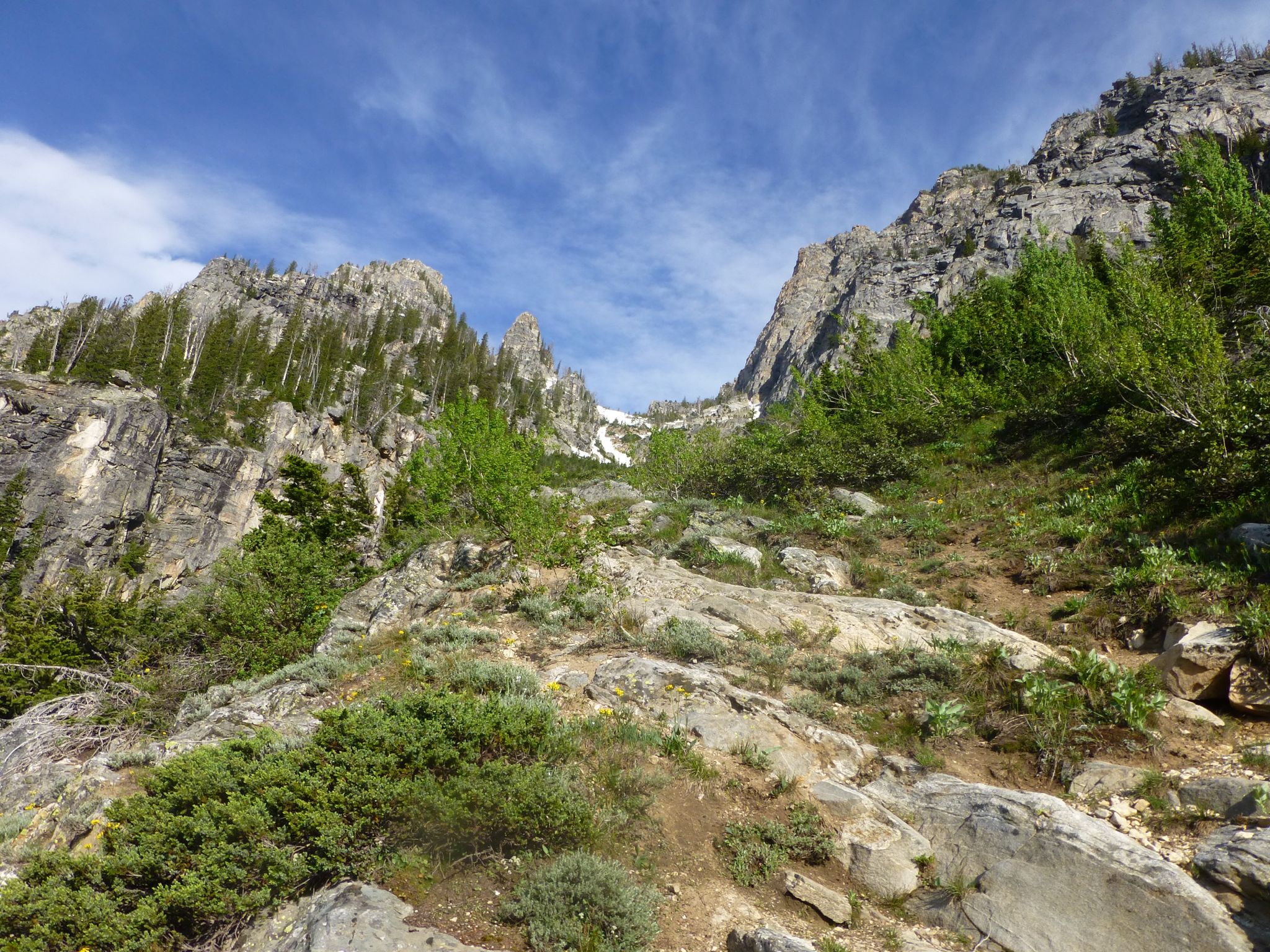 With the snow up high a slushy, sliding mess, I was looking for some dry rock lower down. Symmetry Spire holds a number of classic routes, and the Durrance Ridge, a long, scrambly 5.6, looked like a perfect solo. Reading Ortenburger’s description, I saw that the first ascent party had summited Ice and Storm Points on the same day, and decided to do the same. Though I originally intended to do so via a more ambitious route, I decided to simply approach via Symmetry Couloir and tag the two Points via their 4th class routes.

Waking up alarm-free at 5 AM, I had breakfast, chatted with Rob for awhile, and biked over to the southern Jenny Lake boat launch around 6:20. After the all-too-familiar hike around the lake to Inspiration Point, I located the use trail to Symmetry Couloir. Some bushwhacking and scrambling got me through the cliff band and up to the snow, where I met (in alphabetical order) Dave, Mark, Mitch, and Scott, fueling up for the long slog.

At around 8:00 after a toasty night, the southeast-facing snow was just soft enough to kick steps, though I was glad to have my axe. Since the duct tape was wearing through on my shoe, I avoided the snow where I could, climbing dirt on the left, then some 4th class rock on the right where the couloir steepened. This deposited me at the obvious base of the Durrance Ridge, just left of a deep couloir, where I switched into rock shoes.

The ridge was basically as advertised — generally steep, with two protectable cruxes featuring fixed pins and a mixture of steep, juggy climbing and scrambling in between. The ridge starts out intimidatingly steep, but with enough positive holds to be secure. The first crux, marked by a ring piton, felt secure and not particularly difficult. Above it, I followed a wandering path through a mixture of 3rd- through low 5th-class climbing. As the ridge steepened near the top, I found another piton at the base of the second crux. This section, a steep lieback/stem up a corner and around a chockstone, proved somewhat intimidating, especially since I lack the hand strength I had developed by last December. After a bit of dithering, I dried my palms, went for it, and pulled over the chockstone with great relief.

A short scramble later, I saw that I was on 4th-class terrain to the summit, and switched back to running shoes. From the top, I followed bits of trail down the sometimes wet, muddy northwest face, then cut across to Symmetry Col. A quick plunge step and boot-ski, plus a bit of side-hilling, got me to the Ice Point saddle, where I met the others recovering from the long snow climb. After some easy, blocky scrambling, the final climb to Ice Point became interesting, with some fun scrambling on a narrow white ridge.

After chatting with Mitch on the summit, I retreated down the white part, then found a chossy ledge to the saddle with Storm Point. The climb up its west/northwest side was mostly an easy scramble, but it looked like it might live up to its name, with clouds building in the valley to the south. The weather seeming stable for the moment, I relaxed on the summit, watching the others deal with Ice, then explored my way down Storm’s eastern gullies and ridges back toward Symmetry Couloir. While this worked, it was probably a mistake — instead of enjoying a long boot-ski, I had to fight my way down chossy ledges and steep mud to reach the couloir. Returning to the trail, I wove my way through hordes of tourists to reach my stashed bike, and rolled back to the ranch sometime before 2:00. 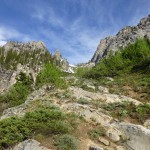 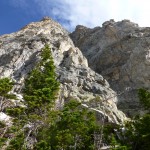 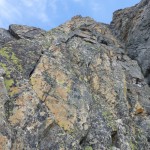 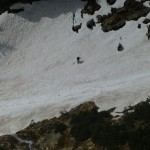 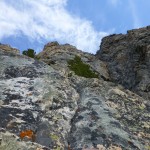 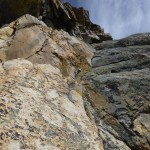 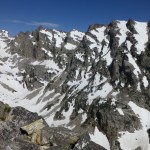 Jaw and St. John from Symmetry 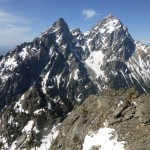 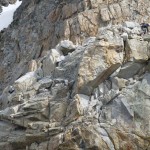 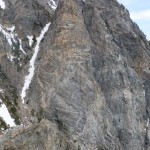 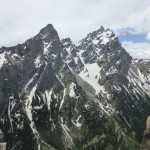 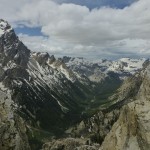 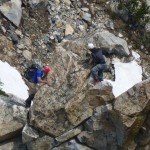