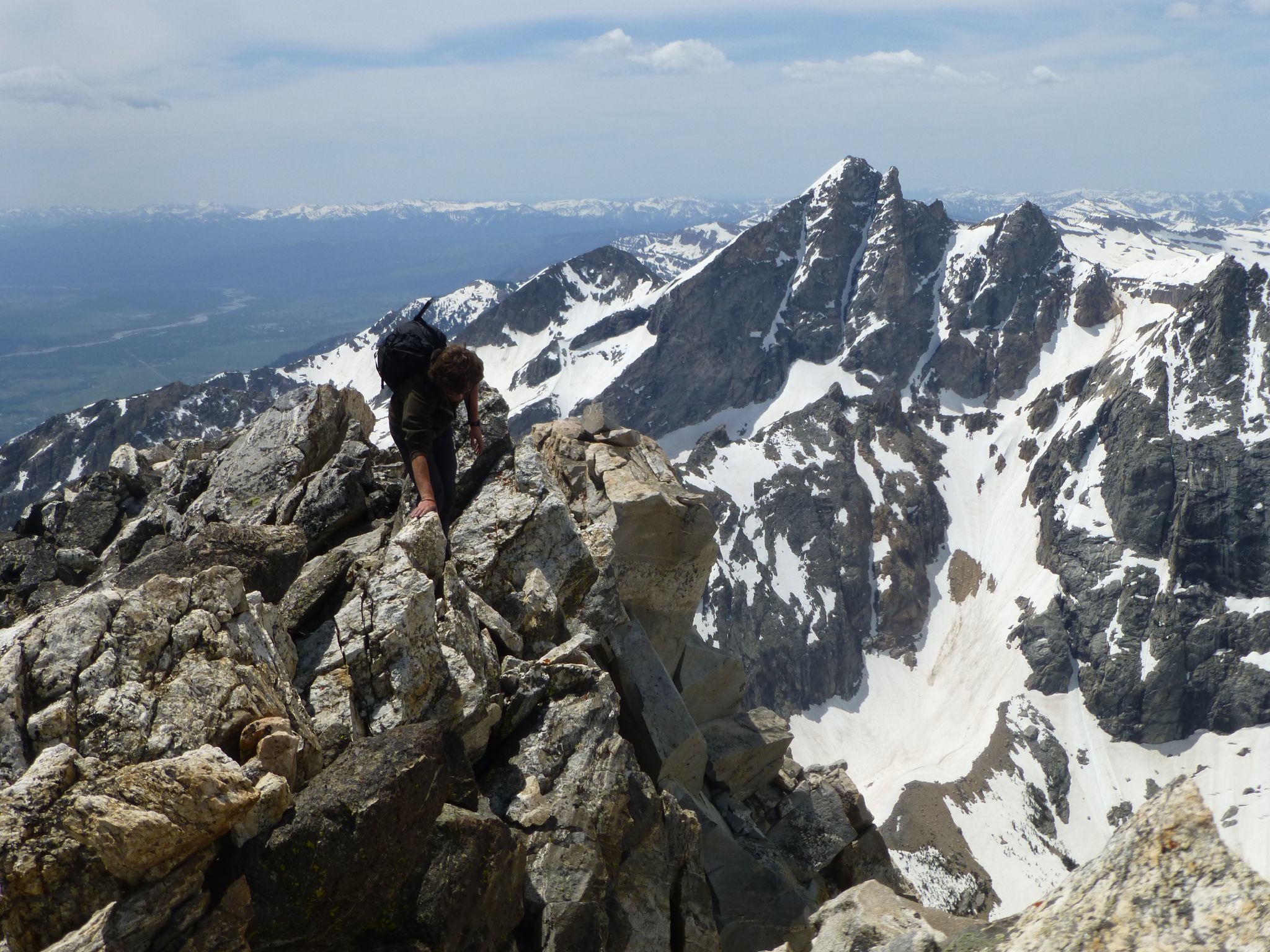 Topping out with Buck behind

I had performed better than expected on a leisurely but steep trad climb the previous day (Dihedral of Horrors, 5.9), and wanted to get back out in the alpine. (I unfortunately forgot to bring a camera on the Dihedral, so I didn’t capture the nonchalant fox we met on the approach, or the impossible-looking climb (There are magic holds to take you out from under a large roof.).) Noah suggested Nez Perce’s Direct South Ridge from his to-do list, a long-ish 5.7 on some of the peak’s only good rock, and I was game.

We left the Ranch sometime between 4:30 and 5:00, late enough not to require headlamps, and kept up a brisk pace to minimize mosquito damage. The chute up from the platforms to the bowl southeast of Nez Perce was half easy talus and half slush, it having been unseasonably warm overnight. Partway up, I became aware of the hole in my left shoe’s toe, and of the snowball that had accumulated there; my feet spent most of the rest of the day in plastic bags.

We continued up the snowy basin to the high col on the north end, and nearly made the mistake of starting up what proved to be a chossy mess of a ridge, but fortunately Noah read the route description, and we continued one more ridge west. Since we were roped, and the climb was only 5.7, we stuck to our running shoes. As usual, we ignored the pitch breakdown, swapping leads for seven pitches with some scrambling and a bit of simul-climbing, and generally finding comfortable belay ledges. Between the wind and the thundering Taminah Falls below, verbal communication was usually impossible.

P1 wandered up a bit of slabby terrain before climbing a blocky chimney to more blocky terrain and a good belay ledge. This was followed by a rope-length of easy scrambling, during which Noah placed absolutely no pro. The start of P3 was the crux, with a tricky move involving dubious feet (harder in running shoes) and a big reach right on the arete to reach more positive holds. The pitch finished on a knife-edge, sheltered from the wind, with an excellent view of Buck to the south. P4 ascended more easy terrain, and required a bit of simul-climbing to reach the next belay — Noah even placed some gear for a change.

P5, after a somewhat tricky start, crossed some lower-angle terrain on the way to a huge, steep buttress. I had hoped to reach its base, and was brought up in an awkward position 10-20 yards short when I ran out of rope. I put in a piece and, after Noah stood up and walked forward from his anchor, I was able to find a good stance, put in another piece, and belay him up. We walked over to the base of the tower, paused to examine the topo, then scrambled along a ledge on the east side before climbing two rope-lengths up a mixture of fun, moderate, excellent granite. From the top of P7, it was an easy scramble to the summit.

We both felt energetic, and it was only around 12:30, so we decided to traverse towards the South Teton. After the usual route-finding SNAFU on the way down Nez Perce’s rotten north face, we started along the ridge, staying much closer to the crest than I did when traversing the other way last year. Every few minutes, an avalanche would let loose on the Grand Teton’s upper snowfield or one of the south couloirs on the Middle Teton — the warm temperatures have created atrocious snow conditions.

Though there was some nice ridge and fun scrambling to be had, our energy was quickly spent fighting through wet 4th class, loose rocks, and slush. When we reached the saddle just before Cloudveil Dome, we agreed that it was time to head back, and had a fun glissade back to the meadows. 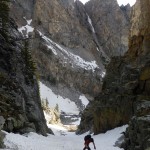 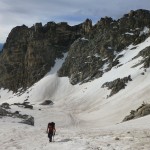 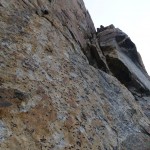 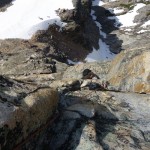 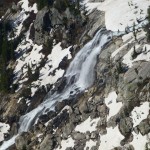 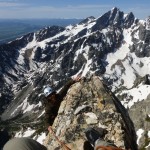 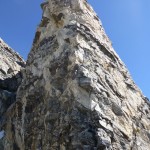 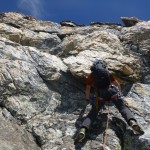 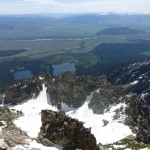 View SE from near summit 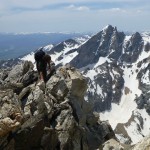 Topping out with Buck behind 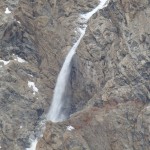 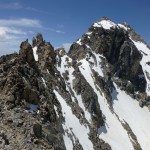 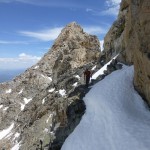 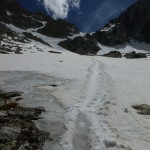