I had originally planned to take advantage of good weather to do something bigger, but did not have the energy for another early start and long slog. Superior and Monte Cristo, essentially one peak and a sub-summit at the east end of Cottonwood Ridge and a quick jaunt from near Alta, seemed more my speed. A rarity in this pile-of-rubble section of the range, Superior’s south ridge is clean, sharp, and direct, with huge positive edges everywhere. Don’t let the 5.3 rating turn you off — it’s a good, fun, easy solo.

I got a lazy start, disturbing a herd of deer as I pushed through some brush to reach the broad start of the ridge. Higher up, I passed several mysterious tubes and some kind of platform. Presumably they had something to do with the nearby ski resort infestation. Resort owners are the miners of our day, building roads and structures all over our publicly-owned mountains to extract as much profit as they can. When global warming renders the industry unprofitable, they will leave their junk to rust and collapse, just as miners did in Colorado and elsewhere. Of course I enjoy finding old mining junk, so this may not be a bad thing for next century’s humans. Past the tubes, I played hide-and-seek with a mangy mountain goat and its kid. They eventually escaped downhill, with the less-adept kid comically entangled in a branch.

The class 2-3 slope narrowed to a mixture of knife-edges and blocks, providing plenty of fun 3rd class scrambling. The few sections of remaining snow were easily crossed in running shoes. I thought I might have missed the 5.3 crux, but a thoroughly-stuck cam near the top made it easy to find. It is really a single maybe-5th-class move, pulling on a big edge with some friction for your feet until you get one into the crack. It would probably be easier to spot someone from below than to carry a rope and gear for that one move.

Above, I scrambled some easier terrain, then put on crampons for a short section of hard snow to the summit, where the mailbox was just beginning to protrude. Superior is a sub-summit of Monte Cristo, separated by a short east-west ridge. I quickly traversed the ridge, anxious to get off the snow before the postholing became too bad. While the section I traversed was easy, Cottonwood Ridge looks intimidating west of Monte Cristo.

Returning to Superior, I was already postholing more than I had on the way out. I originally planned to follow the ridge to the pass to the east, but the ridge started to suck, so I headed down toward the snowfields southeast of Superior. The terrain under the snow is mostly awful — sharp, un-skiable scree — but I found some more solid ribs in places, and the glissade was worth the pain, depositing me 100 yards from my car.

Looking down the approach 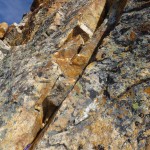 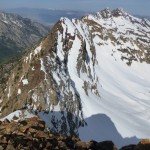 Having many daylight hours to kill, I ran some errands, then decided to check out the West Slabs (5.5, supposedly) on Olympus. I easily found the trailhead, but blew right past the gully, continuing on a trail to… somewhere. Backtracking, I ran into a fellow soloist at the ravine, and followed him to the base of the route, glad to have an ice axe rather than improvising with a stick or rock.

Though he was fast on the approach, my companion slowed somewhat on the climb. I soon lost sight of him, cruising a random line up the generally feature-ful slab. The climb reminded me a bit of the flatirons, though it is much longer, and the climbing felt much more secure than the standard route First Flatiron (5.6).

Following an obvious gully, I went too far south on the descent, eventually correcting my error by re-climbing a couple hundred feet and traversing north. As I rejoined the correct route, I saw my earlier companion in another, steeper gully just to the right of the main west slab. After a bit of boot-skiing, I rejoined the approach. 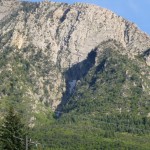 View up from the base

View down from near the top