Another day, another chunk of what should be a single-day traverse completed. Waking up early in another Walmart parking lot (there is no camping in national forests around here, not even if you’re willing to pay), I put in a bit of headlamp time to hopefully take advantage of snow conditions. Tanner’s Gulch is a south-facing avalanche chute between the two peaks, and evidently a popular snow climb, judging by the well-defined use trail to the base of the chute.

I put away the headlamp while rock-hopping up the flatter lower part, then donned crampons upon reaching some pleasantly hard snow. Remembering SummitPost’s recommendation to take a rightward branch to avoid a small cliff band, I took the first obvious fork, whose right-hand branch had more snow. The snow quality deteriorated as I climbed, until I finally reached a near-dead-end. A quick scramble up the ridge to the west made it clear that I had taken the wrong right.

Back down, then back up, the snow softening all the while. The right right is obvious — the “cliffs” (a bit of easy 4th class on one side) are visible from the fork. The broad snowfield above the fork had partly melted out, so I got to experience a bit of the underlying talus before continuing on snow, much softer than that below.

I met three men coming down, who had started at some ungodly hour to make it down before work. They said the snow on the ridge was solid, and that they had not been climbing very quickly. I believed the former, but not the latter — they knew what they were doing, with crampons on running shoes. I followed their boot-pack to the ridge, where I found the snow less-than-solid, and Sunrise peak farther away than I thought. Then again, maybe I’m just out of shape and not used to Wasatch snow. Wind blasted the summit, sending the bits of crust kicked up by my crampons spinning into the void, but the temperature was pleasant in sheltered spots.

I ditched the crampons on the way back, and rarely missed them. Compared to Sunrise, Dromedary was a breeze — dodge a cliff to the north, switch back to the south, and get on the mostly-snow-free ridge. After gaining all that elevation I was tempted to traverse over to the last two peaks — Superior and Monte Cristo — but it looked like a long slog in softening snow, so I returned via the chute.

Knowing that it connects when it is in, I blindly took the eastern branch from near Dromedary’s summit, and was nearly screwed by a gap with a waterfall. Fortunately, a 10-foot squeeze chimney to one side dropped me back to the snow (where I had speared my ice axe after it interfered with my chimneying, leaving myself no choice). The steeper snow higher up was all shin- to knee-deep and soft, with too much “texture” to glissade comfortably. Lower down, it hardened nicely, and I enjoyed some nice boot-skiing.

Since I had hours of daylight left, I thought I might be able to drive up and tag Superior and Monte Cristo by another route. After a nap, I felt my various wet gear, thought about snowshoeing up a pile of slush and climbing a low-5th-class ridge in boots with snowshoes on my back, and changed my mind. Another day. Or night, really: despite hours and hours of daylight, I’m best off with absurd alpine starts for short days. I should learn to take siestas. 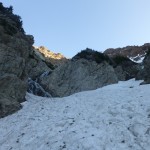 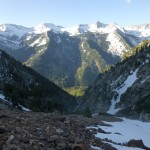 View south from ex-snowfield above fork