As the name suggests, Lone Peak keeps somewhat to itself. While I might have been able to link it with South Thunder, it would have been a long day, and my body needed to recover. Instead, I climbed it by itself via the standard Jacob’s Ladder trail (“what to do in Draper on a weekend”), which climbs a little over a vertical mile from valley to summit. Despite the forecast, I once again enjoyed fine weather; hopefully this luck will hold for the three days I need for the rest of the Wasatch 11k peaks.

Though this was not clear from the descriptions I found online, the city of Draper has installed nice trail signs (stocked with maps), outhouses, and even some picnic tables at the various foothill trailheads along the dirt road. The gate partway up the road also appears to remain open at this time of year.

After some lame switchbacks, the trail heads up the hillside in an admirably direct fashion. The first part of the trail stays on south- and west-facing slopes, so I encountered almost no snow until the summit of Enniss Peak around 9,200′. From that point to the summit, the route was entirely snow-covered. After putting bags and crampons on my feet, I followed a few old tracks into a vaguely Sierra-like area of granite slabs and towers, with Lone Peak’s impressively vertical west face obvious to the northeast.

Knowing that the northern summit is the highest, the easiest route is obvious — simply follow the curving northwest ridge. Fortunately, the snow was still mostly hard on the way up, so I made my way to the final summit ridge easily, if not quickly. The final section of the ridge reminded me of an easier version of Gardiner, with some rock steps to negotiate and a few snow knife-edges.

From the summit, I admired the cliffy north-facing wall of the southern subpeak, and the rest of the Wasatch from Nebo in the south, to the peaks along the Great Salt Lake in the north. The ridge to South Thunder looked extremely time-consuming, making me glad I had decided not to try a link-up. I suffered some postholing on the way back, but found a bit of boot-skiing to make up for it. Even with their snowshoes, the two guys I met on their way up the trail were probably in for some suffering. Hopefully it will cool down up high Tonight; otherwise I’m in for a world of hurt tomorrow. 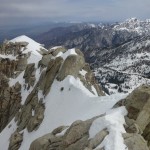 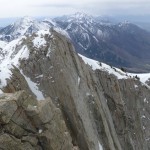 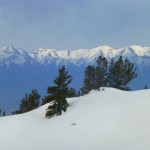 Sun on Oquirrh range to the west 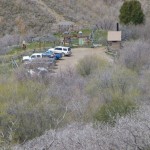