Not trusting the camping in Little Cottonwood Canyon, I spent a restless night in a Walmart parking lot, then drove up early to knock out the easier 11,000′ peaks in this area. The first two, Sugarloaf and (Just Plain) Baldy, were kind of pathetic, being surrounded by ski areas. (The peak-naming in this area is pretty bad, with no fewer than three Baldies and two Twins all within sight of each other.) After starting at almost 9,000′, I walked up some ski runs, then briefly left them to tag Sugarloaf. Returning to the ski runs, I followed a skiers’ boot-pack to the summit of Baldy, where there was a convenient ski patrol toboggan.

“Hidden Peak,” with a lift to the top, was too pathetic to bother with, so I bypassed it on the way to American Fork Twin. By now the lifts were running, ferrying the racing team and a few spring skiers to Hidden’s summit. I followed another boot-pack along the ridge, climbing through a few trees, then up the slope to the lower Twin Peak, the destination for most skiers. A short walk brought me to the summit, from which I could see the rest of the route. Red and White Baldies looked intimidatingly far away.

The snow was soft enough to stow my crampons, but still well-behaved enough that I rarely postholed. After a stroll down to the saddle, Red Baldy actually got interesting, with some fun easy 3rd class scrambling up the final summit ridge. Looking across to White Baldy, I was happy to see that it promised more of the same. On the way between the (second and third) Baldies, I met a backcountry skier out for a couple of laps to the saddle, one south toward the lake I used to access Box Elder, and the other back to the trailhead on the north side. Though it was t-shirt weather, there was still plenty of good snow in both directions.

The ridge up to White Baldy was a bit more involved, forcing me to backtrack in a place or two, and 4th-class my way straight up a headwall near the top. The snow was starting to become annoyingly soft, forcing me to hunt for rocky bypasses. The summit had the Utah-standard mailbox with a frozen mass of paper inside.

After a comfortably warm and windless break, I headed off down the north ridge, where I had earlier seen some chutes leading into the basin to the northeast. The ridge had a few tricky sections, and the chute was full of deep, heavy slush in which I briefly became stuck. Fortunately, most of the snow lower down in the basin was better consolidated. I followed skier and, eventually hiker tracks back to the trailhead. One nice couple gave me a short ride, but I ended up walking most of the road back to the car. This may be a ski area, but most people didn’t seem to want to pick up a grungy climber in their nice, shiny cars. 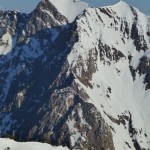 Baldy and Cottonwood Ridge from Sugarloaf

Red and White Baldies from Twin