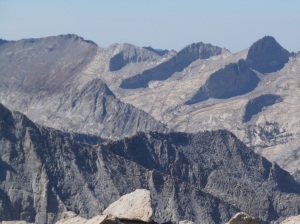 Whaleback and Glacier Ridge, southwest of the Great Western Divide on opposite sides of Cloud Canyon, are more of the Sierra’s most remote peaks. While there are several ways to approach Cloud Canyon, the most popular seems to be from Marvin Pass, incurring a 50-mile round-trip. Bob and Matthew had done the approach once for each peak but, as is my wont, I bagged them both to avoid repeating it.

The hike over Marvin Pass to the Roaring River ranger cabin is long, but has some nice views of the Great Western Divide and the Sugarloaf, the small namesake dome of Sugarloaf Creek. I was fortunate to be able to see these things during an unexpected daytime return, because at night, the trail is 14 soul-crushing miles in a sand-filled trench. I left the Marvin Pass trailhead at 3:05 and, Unable and/or disinclined to run much by headlamp, I reached the ranger cabin at 6:45, signed in, and took off toward Colby Pass.

Near Big Wet Meadow, 5 hours into my day, I finally spotted Whaleback, from its classic angle. This late in a dry year, the place was big and meadow-like, but fortunately not at all wet. I continued on the Colby Pass trail to just past where it crosses Whaleback’s north ridge. Though the trail is supposedly unmaintained and “not recommended for stock,” it is both in good shape and seems to see stock travel.

I filled up my water, then finally met sunrise as I climbed back onto the ridge. Most of the ridge is class 2-3 — fortunately, since it is quite long — with only a few 4th class boulder problems toward the upper part. It starts out broad and uninteresting, but narrows and becomes more fun near the top, with a few cool knife-edge and catwalk sections. I would recommend it if you plan to climb Whaleback, as the obvious and iconic ridge is much easier to find than Eckert’s Blowhole route on the west side.

I reached the top in 7h30, faster than Bob’s 9h30 and slightly slower than Leor Pantilat’s 7h20. I was fairly pleased, since Pantilat is a much faster trail runner than Yours Truly (and was apparently equipped with short-shorts). The view west to Glacier Ridge is spectacular, and the views to the south and west provided new and interesting perspectives of the Kaweahs and Great Western Divide, both familiar territory. It being a clear day, I could see from Goddard and the Palisades in the north, to Whitney in the south.

I planned to descend the Blowhole route, cross Cloud Canyon, and cruise up the slabs to Glacier Ridge, but things quickly went sideways. I thought it should be easy to find the “ledge 100 feet below Whaleback’s south ridge” mentioned in Secor but, dropping southwest off the summit, I found a steep gully that, after a bit of 4th class fun, looked increasingly ominous. Reaching a chockstone, I scrambled west onto some wavy slabs to get a view of the face below, and spied a diagonal crack below that would take me to easier ground. Traversing farther west, I descended a steep face on a mixture of cracks and cool knobs, then headed back east into the crack system. Some diagonal back-and-forth on a system of narrow ledges got me to lower-angle ground, from which I diagonaled south to the bottom of Cloud Canyon. There was no blowhole involved, and some low 5th class downclimbing, but it worked.

From the canyon, Glacier Ridge was a fun slab romp with a bit of talus at the top, and a cool summit block with big knobs. I made absurdly good time climbing such easy ground. Though Glacier Ridge sees less traffic than Whaleback, its summit views are more impressive, with Whaleback and the Great Western Divide to the east, and “Big Bird Peak” and the Tablelands to the west.

Rather than return the way I came, I followed the ridge south a bit, then dropped west down talus, sand, and steeper class 3 slabs to the Elizabeth Pass trail. The upper portion descends one of the most perfect glacially-carved valleys in the High Sierra, and I stopped frequently on my down-canyon run to look back and take pictures. Since it looks possible to reach this valley from Big Bird Lake, approaching Glacier Ridge out of Lodgepole or Wolverton across the Tablelands looks shorter and preferable to the Marvin Pass approach.

I reached the Roaring River cabin around 3:40 and found the ranger talking to a packer outside his cabin. I would have liked to meet him, but the time did not seem right. I jogged most of the flats and downhills on the return, and even some of the gradual climbs. It seemed like the most natural pace, and jogging was less maddening than fast walking in the sand. After an expectedly long and painful climb, I reached Marvin Pass before sunset, and ran the easy trail to the car, where I ate some random food, made a half-hearted attempt to remove my dirt tan, and crawled in back to sleep. 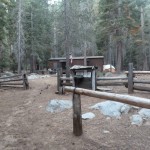 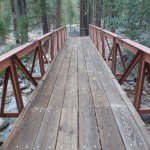 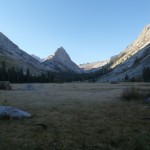 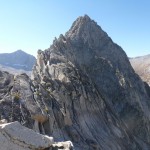 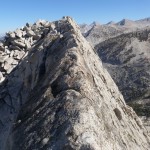 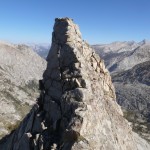 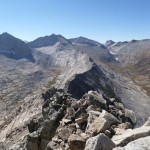 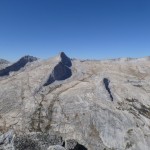 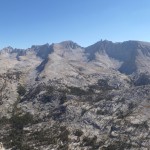 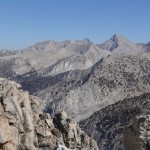 Brewer and Guards from Whaleback 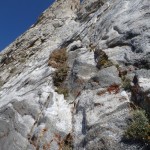 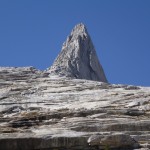 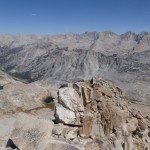 Whaleback and GWD from Glacier Ridge 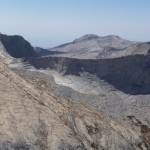 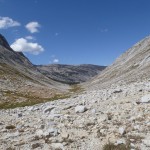 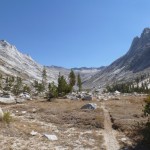 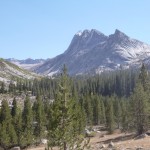 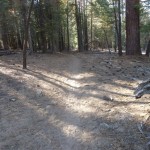 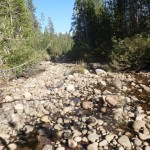 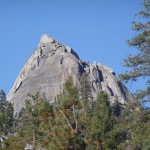 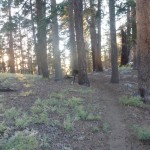 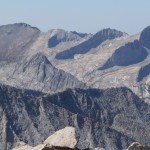