I was looking for a straightforward workout, and going up Baxter Pass to tag these two peaks could be described that way. If I felt ambitious, I could also tag Diamond on the way out. This would also complete my tour this summer of the four big Eastern Sierra passes: Taboose (5380′ to 11,352′ in 6.25 mi.), Sawmill (4586′ to 11,347′ in 10 mi.), Baxter (5971′ to 12,270′ in 8 mi.), and Shepherd (6299′ to 12,008′ in 11 mi.). Baxter is an odd pass, crossing the crest at a semi-arbitrary point that is not a saddle. The trail is less distinct than Sawmill’; deadfall from a fire some years ago blocks it in several places, and it nearly disappears through a flat, brushy section. Though not as fun as Sawmill, thanks to its lack of stock traffic, Baxter is still more pleasant than Taboose and Shepherd.

Mine was the only car at the trailhead when I started at 6:15. After passing through a strange metal arch, the trail is easy to follow to the second stream crossings. Both crossings could be tricky and/or wet earlier in the season, but the creek was low enough to make both fairly simple. As most of the trail is on the south side of the canyon, the morning hike out of the desert was shady and pleasant. The trail is briefly hard to find around the second crossing, then improves before nearly disappearing in a broad, flat section full of brush and erosion gullies. While it is still easy to follow in daylight, it would be easy to lose by headlamp. The trail improves again passing through some widely-spaced trees, and remains good, though rubble-based, to the pass. Hiking steadily, the climb took about 2h50.

From the pass, the trail descends north into a talus wasteland, then curves east before heading west to meet the JMT. Acrodectes and Baxter lie across the valley. After considering my options, I decided to follow the ridge at the eastern end of the valley, connecting the pass to Mount Baxter. Though it was long, with a lot of slow class 2-3 travel, it was better than it looked. Sheep trails on the first, rounded part of the ridge tamed the loose dinner-plate talus, and the underlying rock on the second, jagged half was actually fairly solid. I stayed mostly left of the ridge crest for speed, but found some good 3rd class climbing and a few knife-edge sections right along the ridge.

The ridge ends on one point of Baxter’s broad three-cornered summit plateau. I found the register on my second guess, it being impossible to tell which of the three corners was the high point. I saw a few familiar names, and much more traffic this year than in previous years, when the peak was off-limits in the summer for the sheep closure.

The traverse to Acrodectes was short, with unpleasantly loose talus on the way down, and easy scrambling on the way up. The talus remained wretched, too big to boot-ski and too loose to walk, most of the way to the faint trail on the other side of Baxter Pass. I found a more-or-less solid rib down Acrodectes’ southeast side that made the steeper portion bearable. Returning to the pass, I looked at Diamond and decided not to try it. The standard route, thanks again to the sheep closure, is a spring snow climb up a steep chute on the northeast side. This chute was now filled with horrible-looking scree instead. A level traverse from the pass to the north ridge looked like the best option, but the east side of the ridge is precipitous, and I lacked the energy for exploratory ridge scrambling. I hiked the upper pass, which is frustratingly un-runnable, then ran the lower, sandy trail to the car. 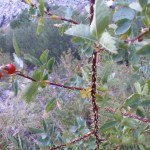 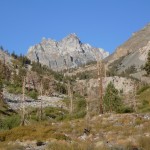 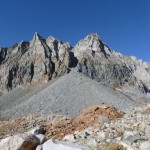 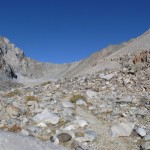 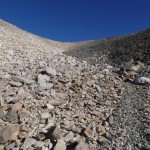 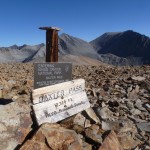 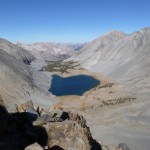 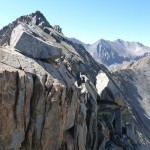 Back south along Baxter ridge 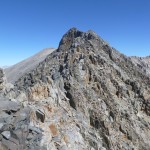 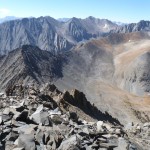 South along ridge to Baxter Pass 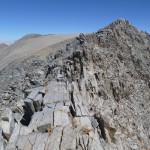 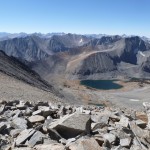 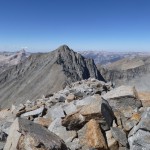 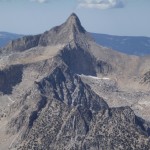 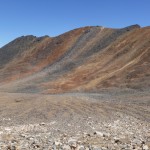 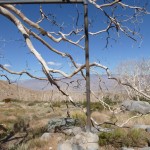