Looking for a not-too-strenuous way to kill a day in the Bishop area, I happened upon Bob’s trip report on the traverse between “Ruby” and Mills, two peaks out of the high Mosquito Flat trailhead. The ridge proved long, tricky, and frustrating at times, but generally fun; with more energy and better weather, the full traverse over Abbot and Dade (and possibly Bear Creek Spire) would be a rewarding, full day.

Though it was warmer than I had expected at the 10,200′ trailhead, I got a somewhat lazy start, not really pushing myself up the Mono Pass trail to the Ruby Lake turnoff. After skirting the large lake, I lounged around a bit before heading up Ruby’s east ridge. The ridge starts out easy class 2, becoming class 3 (or 4, if you want) near the top. Along the way, I passed an American flag hopefully not flying above human remains.

The ridge south to Mills did not look extraordinarily long from Ruby, but I found some very tricky route-finding along the way, making for a summit-to-summit time of about 2h20. For comparison, Thunderbolt to Sill took me 2h30 when I did the 14er record. The traverse starts out fairly tricky from Ruby down to near the low-point, then eases off to a boulder-hop before another tricky section leading to Mills. While it may be 4th class with careful route-finding, possibly including dropping well down one side or the other, expect to do some easy 5th class with significant exposure. The rock is mostly solid, if crumbly on parts of the left (east) side.

I stayed fairly close to the spine on the first section, dropping left in a couple places when large blocks looked like they would cause trouble. The top had some very fun climbing, including a couple of hand traverses and an excellent rock sidewalk. There was also some tiring block-maze terrain, requiring some exploration and backtracking. I was glad to reach the easy middle section, where I could cruise over boulders and sand on the left side.

The crux was probably somewhere after the ridge narrowed again. The left side was usually too precipitous to use, while the right consisted of sloping, vertical fins. When the blocks on top became too difficult or time-consuming, I usually dropped a short ways to the right. However, it works best to stay near the ridge, since the fins periodically steepened, making the ridge the better option. At one point, I had to build a short stepping-stool to climb over a block on the crest, with no good bypass options to either side.

As the ridge finally climbed toward Mills, I left the crest for class 3-4 terrain on the left side, leading me to the edge of the steep notch where the standard route’s gully joins the ridge. I crossed to the right side to reach the notch, then followed the standard route to the summit.

On a clear day with lots of energy, I would have tried continuing to Abbot and Dade, but Mills was enough for today. I signed the register, had a snack, and backtracked to the gully. Ascending this way would be some combination of miserable and dangerous: the route is a narrow, steep gully full of all sorts of debris. Rocks I dislodged bounced most of the way to the base, and the dirt and sand I set loose would sometimes be blown back into my eyes by wind coming up the chute. Fortunately it did not cliff out, and I happily exited near Mills Lake, emptied my shoes, and boulder-hopped back to the Mono Pass trail. 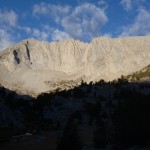 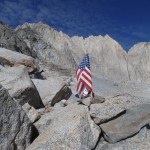 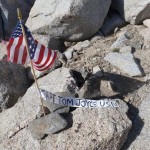 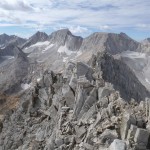 Fun, but a tricky dismount 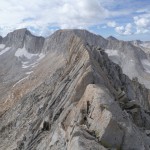 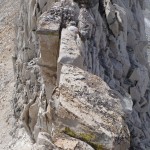 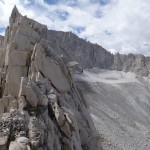 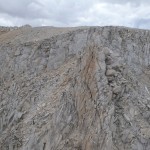 Summit plateau from before notch 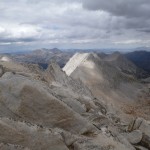 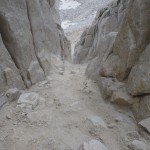 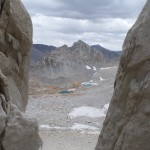 Looking out base of chute at “Treasure” 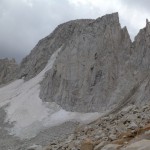