Up from top of P1

What better way to spend a day off than hanging around Lone Pine for a walk-in permit to the Dread Whitney Zone? The staff at the Visitor Center still doesn’t seem to have its act together, but it took no more than a half-hour to get one sheet of paper and two empty poop bags, signifying legal access to the north fork of Lone Pine Creek.

The plan was to pack in to Iceberg Lake and do Whitney’s East Buttress on one day, then do Russell’s Fishhook Arete and pack out the next. While it would require both ropes and camping, it would knock out two classic routes sharing a single approach, both slightly beyond my solo abilities. However, thanks to some very un-Sierra weather, we only managed to complete the East Buttress and the night-time suffering.

We climbed the buttress in 6-1/2 50m pitches, with some unroped scrambling before and after. The climbing was fun, if not particularly sustained. Despite what guidebooks say, either route seems reasonable as a day-trip.

We joined the 5:30 AM Whitney starting wave, leaving the main trail at the increasingly well-maintained north fork cutoff. I remember there barely being a trail when I first climbed Whitney in 2007, but the route is now actively maintained, and even appears on the latest Whitney-area maps. We reached Iceberg Lake in reasonable time, despite my totally botching the willow crossing above Lower Boy Scout Lake, and Jen’s being tired and less than her usual speedy self. (Had I known just how tired, I might have been more merciful.)

We dropped the camping gear in one of the many windbreaks above the lake, then scrambled up the rest of the approach. When the scrambling got hairy, we backed off and roped up at the belay ledge partway up the first pitch, mentioned in the route description. None of the climbing to this point was harder than 4th or easy 5th class.

I led the first pitch, following cracks filled with old pitons to a massive belay ledge atop the first pillar. Starting a pattern for the day, I placed very little pro, there being enough fixed pieces to almost make it a sport route. A block on the belay ledge even had multiple new-ish slings around it for an easy anchor.

Jen led P2, across the gap and straight up a face with some flaring cracks, which she had to run out quite a bit, since the multiple pitons had all been pounded in too far to clip. After I moved the belay to the base of the face, she used up the entire 50m rope to reach a shady perch on the north side. With a 60m rope, this pitch would end on a sunny ledge instead.

P3 continued near the spine of the ridge, with many fun options of various difficulty, to another good ledge with a slung block and a comfortable seat. P4 covered moderate ground to the base of the “Pee-Wee,” a large overhanging block. P5, also moderate, passed right of this feature before continuing to a fairly arbitrary belay.

It looked possible to head right to easier climbing at this point, but I saw a fun-looking chimney with a flake in it above. Jen had other ideas (she “didn’t want me to get bored”), finding a harder crack/dihedral to the left of the obvious chimney and out of my view, containing a couple dubious pieces of webbing. I wondered what was taking so long. Then I tried to climb it, and found a tricky undercling, stem, and jam explaining the delay. I climbed it in my classic style, in this case involving muttering and counterpressure with my helmet.

From here, I scampered up easy ground on the north side of the buttress to a big ledge in view of the summit, where we packed away the gear. From there, it was a 3rd class free-for-all to the summit, with an optional tunnel along the way. We talked with some of the trail-folk while clouds approached from the southwest, then had a taste of graupel as we descended the mountaineer’s route to camp.

I had hoped to improve upon my last gourmet camp meal by mixing some powdered milk with the instant mashed potatoes. However, having packed too few potatoes and unflavored fish, I ended up with slightly bland potato soup swimming with sardines. Oh well, it’s calories. The full moon on Whitney and the needles was probably spectacular, and I was awake for plenty of the night, but I had my mummy bag cinched over my eyes and did not get to appreciate the view.

We got a late start the next morning, after waiting for things to warm up a bit. Seeing the clouds to the south and west, two other parties camped at the lake abandoned their climbing plans, but we decided to at least start up and see if conditions improved. As it turns out, they did not. We found the start of the Fishhook, and Jen got about half-way up the first pitch, but the weather got worse. One very cold bail later, we hiked back to camp and packed up in light rain. As often happens, it was clear and sunny by the time we reached the trailhead. 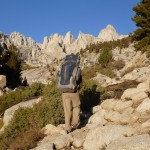 Approach with much stuff 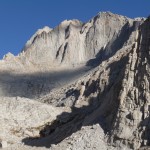 Russell from the SE 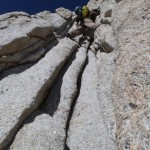 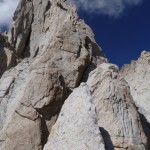 Up from top of P1 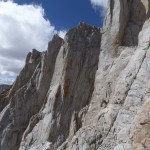 Needles to the south 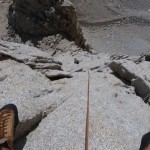 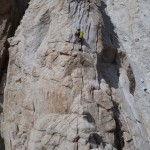 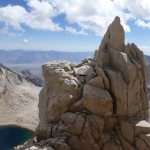 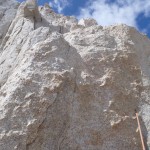 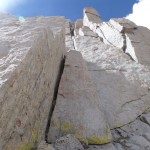 Obvious P6 above, or harder variation to the left 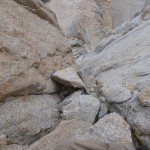 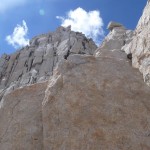 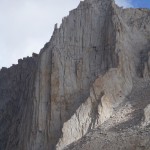 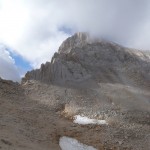 Clouds coming in over Whitney 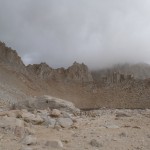