Clarence King from the SE

Fourth time’s the charm. In June 2008, I was fat, slow, and unprepared. In July 2008, we were turned around by the edge of a storm that closed highway 395 and destroyed the Whitney fish hatchery. In July 2011, I wussed out on the final move to the summit block. In September 2012, vengeance was finally mine.

Clarence King, with its intimidating 5.4 summit block, used to be one of the harder Sierra dayhikes. To avoid pointless bighorn sheep closures, one had to take a roundabout approach to Rae Lakes via Kearsarge and Glen Passes. With the closures finally eliminated, the more direct cross-country route over Dragon Pass drastically shortens the approach.

Getting back from Whitney, I checked in with the rest of the world at McDonald’s in Lone Pine, then headed up to Onion Valley for a scheduled 4 AM start. I was the only headlamp around at 4:00, though, and it was unpleasantly cold, so I burrowed back under my down bag to wait for the sun. As I finally found the motivation to start around 7:00, I saw Rick and Darija organizing their gear. Evidently, they had shared my sentiments at 4:00, but had not showed their headlamps before going back to sleep. This turned out well for me, as Dragon Pass would have been cold and tricky at night, and I made it back for dinner.

We had little trouble finding the faint trail to the lakes above Golden Trout Lake. To make your life easier, stay right from the marshy meadow and past the first lake, then pass the second lake on the left. Rick and Darija were suffering from the altitude, and I saw much headlamp time in their future. Not wanting to share their grim fate, I left them on the boulders above the second lake, finding the non-obvious chute I used on Dragon Pass last year. While there may be a better way, this chute on the east-west ridge north of “Dragon’s Tooth” has worked for me with a bit of 3rd class climbing toward the top.

After bombing down the sand to Dragon Lake, where I emptied my shoes and filled my water, I downed some bargain-bin apple pie things (480 calories for 69 cents!) and picked up the old trail down to Rae Lakes and the JMT. I followed it south across the log between the lakes, then picked up the 60 Lakes Basin spur, which sees a disgusting amount of horse traffic. Having done this part of the approach twice, I knew to stay on the fading spur trail past where one wants to cross the ridge to the north, leaving it near a dried-up lake.

As Tom and I did last time, I followed the stream west, passed the lake on the north, and headed up the south side of the ridge to a notch near a large rock thumb. From there, it is a simple side-hilling traverse to the saddle south of Clarence King. Most of the climbing from the saddle is class 2 sand and boulders, with the difficulty abruptly increasing perhaps 100 yards from the summit. The last part of the route starts on the right-hand side of the face.

The first real difficulty is a dihedral/crack leading to a horizontal chimney thin enough to force me to take off my pack. (The Starr variation, right of this chimney, is a hole too small for me to attempt.) From there, easy scrambling leads to the base of the massive summit block.

The summit can be climbed in three parts. First, climb on top of the flake below its southeast corner. Then undercling/overcling to pull one’s body into the “V” between the summit block and the angled block to its south. Finally, a mantle with one good hand and a shallow dish for a foot leads to the sloping top of the summit block. While the move into the “V” is probably hardest, this final move is definitely the most intimidating. A spotter can prevent the leader from pitching off into the abyss to the west, but there are no good cracks or horns on top to belay a follower. Fortunately, all three sections are easier going down than coming up.

I reached the summit about 6 hours from Onion Valley, and enjoyed the long-sought perch for about 15 minutes before heading back. On the way down, I found a faster path over slabby terrain in the basin southeast of the peak. Meeting Rick and Darija shortly after a class 3 descent to the large lake I skirted on the approach, I wished them well in their future world of darkness and pain.

Retracing my steps to Dragon Lake, I managed to avoid the worst of the sand by staying left and heading straight for the ridge. Passing a few campers in the Golden Trout Lakes drainage, I was back at the car around 5:50, just in time for dinner. 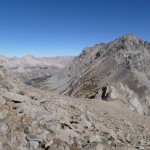 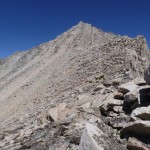 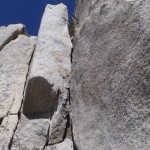 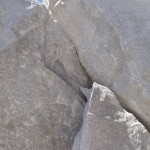 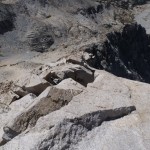 View down mantle to summit 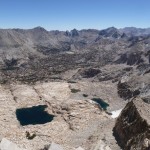 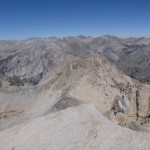 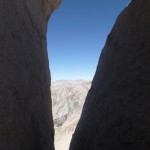 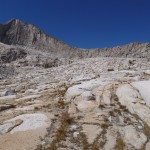 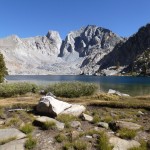 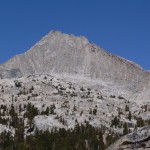 Clarence King from the SE