After so many fun and/or relaxed days, I felt it was time to spend some quality time with my headlamp for a bit of self-abuse. Devil’s Crags, were a good prospect: Southwest of the Palisades, they are some of the Sierra’s hardest peaks to reach, with 15 miles of on-trail approach from South Lake, a 4th class finish, and a brutal 3800-foot climb out of LeConte Canyon on the return.

I had planned/hoped to make this an end-of-season test-piece by traversing the 12 crags, but thanks in part to mental and physical fatigue, I only tagged the highest one. Still, I got to see a new area of the range, and made the trip in a respectable 14h50, including about an hour spent enjoying the summit. The car-to-car traverse, while a serious undertaking, seems entirely possible in under 24 hours. I have a couple more big things planned for this last part of the season, and will hopefully be better prepared and rested.

My alarm did not wake me at 1:30, but I was up a bit after 2:00, and on the trail at 2:45. Bishop Pass took the usual 1h40, and I reached the JMT in LeConte Canyon at 6:15. The trail from Dusy Basin into the canyon, like most rocky pack-trails, is not very runnable, especially by headlamp. The JMT is in better shape, and I found my stride on the way down to Rambaud Creek, passing several sleeping backpackers.

I cut off above where the creek meets the river, crossing on a wet log and soaking one foot in the process. The hike up to Rambaud Pass is a talus- and bush-whack, but nothing to one who has tasted the horrors of George Creek. The talus tended not to move, and most of the bushes didn’t even have spines. I stayed above the creek to the right on the way up, and cut even higher on the way down, avoiding almost all of the brush in exchange for some steep forest.

After getting water near one of several lakes at the head of the stream, and admiring Devil’s Crag #1’s northeast face, I continued the boulder-hop toward Rambaud Pass, then headed up the white talus from the knob at the Crags’ head. I contoured right across a few gullies as I climbed, eventually reaching a saddle above Rambaud Pass to find that I had passed the Crags and reached the head of a small valley between them and another, less precipitous black ridge to the southwest.

Returning north, I contoured just below the white knob and started up Crag #1’s northwest ridge. Much of the climbing was exposed class 2-3, but there was one stiff 4th class pitch getting out of a deep notch. I climbed a face on the crest of the ridge on the way up, and a corner system to the southwest on the way down. The former is definitely the easier and safer way: I found harder climbing on the way down, and pulled loose a substantial handhold. Exposure-wise, a knife-edge hand-traverse past the notch was probably the crux, and proved tricker to climb on the return.

Reaching the summit in 7h40, I found photocopies of the original register, and a current one showing very little traffic. I was the only one to have summited this year, and only a single party of two made it last year. I looked at the start of the traverse, but lacked the will and energy for extended exploratory 4th class climbing on dubious rock, or for a 20+-hour day. Instead, I lounged around on the summit for most of an hour, then headed back.

All along the climb, I found a shameful number of old rappel slings, often above mostly 3rd-class terrain. I was surprised, since only a few parties summit even in a busy year, and the last party to summit removed what they could. Had I had a knife, I would have taken the rest.

The return was uneventful, if long and painful. From where I rejoined the JMT, it was 3,800 vertical feet to Bishop Pass, much of that in the sun on the east side of LeConte Canyon. I kept a decent hiking pace to the pass, then ran most of the way down the other side, stopping only for a lucky wildlife shot. 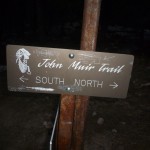 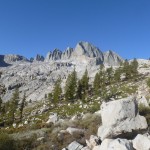 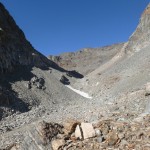 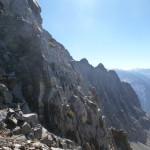 SW side of Crags 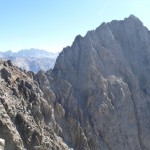 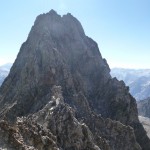 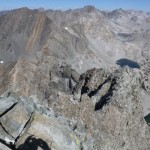 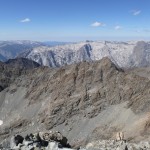 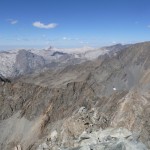 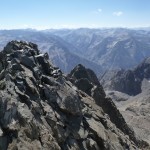 SE from summit, along Crags 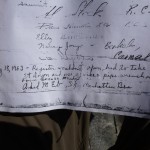 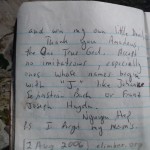 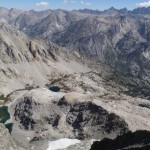 NE from summit, to Palisades and Bishop Pass 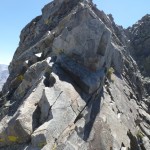 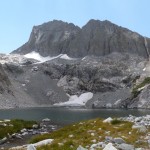 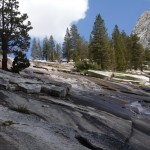 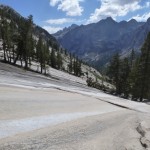 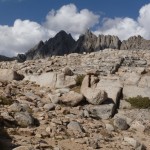 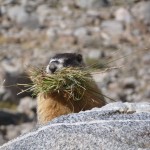