Norman Clyde Peak is Middle Palisade’s prominent neighbor to the north. Not being a 14er, and not having any routes easier than 4th class, it sees relatively few ascents. Its north face, with a buttress rising directly to the summit, has always drawn my interest. While I have long been meaning to solo a 5.4 route on the face, when I found myself in the unusual position of having a climbing partner, it became possible to climb the buttress itself.

We climbed the route from the snow at the base, with one 50m pitch below the ledge holding the circular snowfield, and four on the buttress. We used a 50m single rope, a single set of stoppers, and cams up to #3 with doubles of #1 and #2. The rock quality was mostly good, and the climbing was more sustained and interesting than we found on Moon Goddess, with a 5.8 crux and plenty of fun 5.6-5.7. We downclimbed the standard route on the descent, completing the route in just over 13 hours car-to-car.

Jen drove up from SoCal the night before and crashed for a few hours at the trailhead — something I remember well from the pre-Dr. days — while I got a full night’s sleep at a pullout on Glacier Lodge Road, and we hit the trail at 5:00. Following the increasingly well-established Middle Palisade trail to the edge of the moraine, we reached the base of the route around 8:30, easily crossing the low-angle snow in running shoes.

After soloing part of the low-angle crack right of the buttress, Jen led a pitch to just below the circular snowfield, past evidence of a very sketchy bail-off: twine tied to an old ring piton. We should probably have put the rope away for the next section, a large expanse of class 2-4 up and left past the snowfield to the buttress itself, but we sort-of simul-climbed it, with me placing a piece about every rope-length until I ran out of gear at the base of the first upper Pitch.

Jen led P1, up through the crux right-facing dihedral, belaying from a large flake below the platform mentioned in the route description where she ran out of gear. The bottom of the dihedral was tricky, but there were good feet on the left-hand side, and good protection. I led P2, right around a corner, then up past the platform, staying mostly on the right-hand side of the buttress, and belayed from an unfortunately cold spot on the right (shady) side of the ridge.

Jen led P3, going straight up and back into the sun, then up near the spine of the ridge on some fun knobs, placing an unfortunately large number of small nuts. I leaned back on the anchor to catch what sun I could, but by the time it was my turn to climb, my teeth were chattering and my hands were clumsy and cold. I dreaded every move to the shady right-hand side of the ridge, and struggled to remove the tiny nuts.

I led P4, up the ridge, then to the right to avoid a reportedly 5.10 headwall near the top. The moving to the right made use of a small but nice step in a right-facing corner with a crack at the corner to protect the move. Unfortunately, the corner added brutal rope-drag, and I had to continue by pulling out some slack, then climbing until I was stopped. I belayed where I could no longer make forward progress, just below the summit. Jen led a final, easy mini-pitch, belaying directly from the summit.

I was pleased to find the book with Norman Clyde’s photo still there, containing my entry from 2008. I was less pleased by the fog covering the east side of the ridge, since the route-finding on the descent is not obvious. After summit fish, we packed up and followed the ridge north, easily finding the chimney onto the NNW face.

We bootied most of the ridiculous profusion of rap stations on the face; I picked up a near-new double-length sling and a wire-gate ‘biner, along with various sun-bleached garbage. After a few premature attempts, I found a couple ducks leading to the crossover point to the east side of the ridge. From there, it was a short scramble along the ridge and down a ramp, and a long walk to the trailhead. 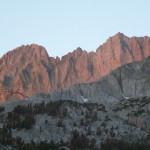 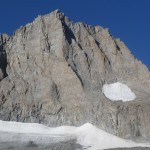 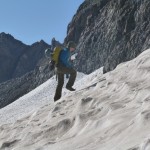 Kicking steps up the snow to the base 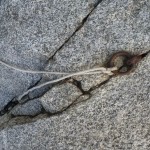 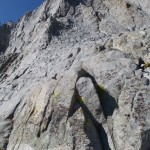 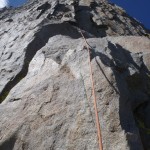 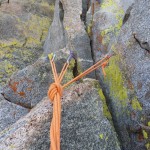 Anchor at the cold P2 belay 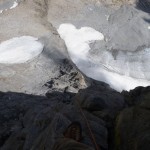 View down from P2 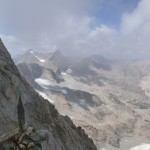 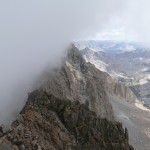 South past Middle Pal from summit 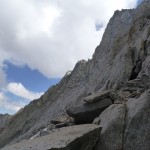 South across Twilight Pillar from near circular snowfield 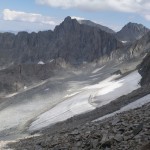 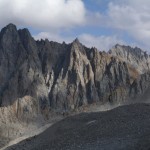