Starting off up Taboose Pass at 4:00 AM, I felt bad for leaving Bob to do Marion by himself during my first Challenge in 2009. Taboose is a long, grim climb, not the best place to spend an hour and a half of headlamp time. This time there was a decent crowd and a more festive atmosphere, though several people remarked that the trail was even more horse-damaged than in previous years. Most were headed for Vennacher Needle, the day’s Challenge peak, while others aimed for Cardinal and Ruskin. I hoped to tag Ruskin, then continue on to Marion and/or Vennacher.

I started off behind Tom with the group chasing Pat, but was feeling lethargic, and needed to go my own pace. I managed to sneak by him at the stream crossing, and put in my headphones for the rest of the climb. I tried not to look at my watch, because I had semi-raced the pass last year in 2:21, and would not come close to that time.

I reached the sign in a more leisurely 2:55, then started looking for the unmaintained cutoff trail as I descended the other side. Not finding it, I traversed the meadow to the northwest, picking up the trail next to the stream as expected. I easily crossed the river to the JMT, which I followed for a short distance before heading west up some slabs to the bowl east of Ruskin. Still not loving life, I lay down on one of the slabs for a 10-minute nap.

I wasn’t quite sure which east ridge was the right one — there are two — but chose the southern one, which looked longer but more likely to be the purportedly-interesting route. I gained the ridge near the bump on its east end, followed it to near where it turns north, then cut the corner and made my way to the summit. The ridge had some nice exposed sidewalk sections, and mostly good rock quality, but wasn’t especially challenging or memorable. While having my fish, I enjoyed my first views of Lakes Basin to the northwest, and contemplated traverses west to Marion, and north to Vennacher Needle. The former looked long and not interesting, so I headed down the northwest ridge toward Vennacher.

Getting off Ruskin was probably the crux. I stayed near the ridge for awhile, then downclimbed a 4th- or low 5th-class wall before a pinnacle, and traversed on the southwest side. At the next major highpoint, I returned to the ridge, bypassed some difficulties to the east, then returned to the ridge before the saddle. I could have left the ridge to the east, regaining it at the spur leading to “Saddlehorn,” but chose to stay, and enjoyed some of the best climbing of the traverse. The natural line was almost always on the crest of the ridge, with sidewalks alternating with fun 4th class climbing. Things settled down over the junction with the spur, after which the ridge crest became jagged and annoying. I bypassed this part on some benches to the west, then got back on the east side before the saddle with Vennacher. After climbing some class 2 talus, I reached the summit about 1h40 from Ruskin (40 minutes from the Saddlehorn spur).

I met a man relaxing on the summit after climbing it from a Sierra Club camp in Upper Basin, who told me he had also seen an Austrian Sierra Challenge participant (Michael). We spoke for a few minutes, and then I took off to reel Michael in. Dropping down slabs past two lakes, I crossed the JMT and made an ascending cross-country traverse to the Taboose Pass trail. Unlike many of my shortcuts, this one worked well: the terrain is mostly open, and can be traversed with little up-and-down.

I found the spur trail turnoff where it joins the main trail (trail maintenance people had tried to obscure it), then caught Michael just before the pass. I proceeded to catch and leave Tom, Kevin, and Bob, jogging mostly from a desire to make the hurting stop. I reached the car just as some crazy guy was starting up in the midday heat, thankful to finish the first of four long days. 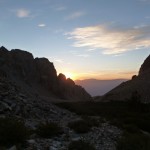 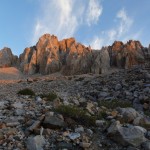 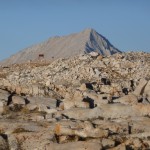 Taboose Summit with Arrow behind 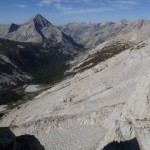 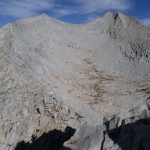 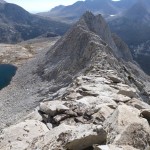 East toward Taboose along ridge 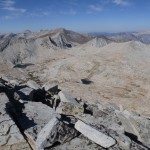 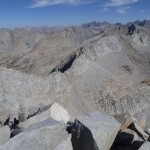 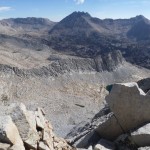 Saddlehorn and backside of Split 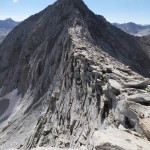 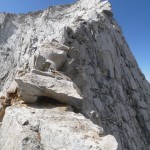 Downclimbed on the left (east) side 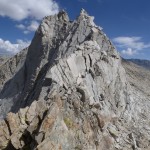 Stay on the crest 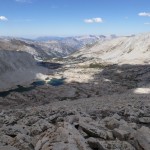 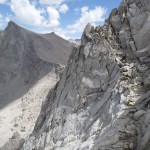 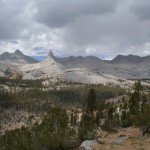