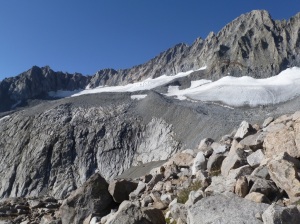 Today’s Challenge peak was “Big Kid”, a likely sandpile analogous to Buck Mountain on the south side of Big Pine Creek. Not having enjoyed Alice and Buck last year, I opted for some differently-shaped peaks on the Palisade ridge: Balcony, Disappointment, and Middle Palisade. While the climb from Balcony to Disappointment had plenty of unpleasantness, some of it unnerving, the traverse from Disappointment to Middle Palisade was some of the best class 3-4 I have climbed since the Muir route on Ritter. And, at 8 hours car-to-car, it left me plenty of time to relax in quaint downtown Big Pine.

While Bob and some of the Big Kid group headed directly south for the sand-slopes of Kid Mountain, I joined some others who planned to gain the first 1300 feet of Big Kid on the South Fork trail. There is still no bridge at the stream crossing, but there were a usable tree and log where it used to be, and a much easier jump-across slightly upstream (used by Ron). After watching the others cross, I put on the music and got to work.

I had originally planned to start by heading to South Fork Pass, then west up the ridge, but learned from Bob that there was no use trail to the pass, and that he had used a chute closer to the peak when climbing Balcony. Knowing this, I instead took the standard approach to Middle Palisade past Finger Lake, but contoured low on the moraine, taking advantage of the exposed slabs where I could. There was some nasty side-hilling below each lobe of the Middle Palisade glacier, and it might have been faster to take the ridge on the other side of Finger Lake, but it worked.

I found the chute blessedly free of snow, but the underlying loose rubble was a slog. The previous day’s rains had made it even less stable, and I managed to dislodge a couple toaster-sized boulders near the top. Conditions improved as the ridge narrowed, and there was some fun class 3 scrambling from near the top of a false summit to Balcony, where I found an old fish tin.

From Balcony, I contoured down around the south side of the ridge to the low-point of the ridge, then made my way up well-behaved sand and boulders to the last pinnacle before Disappointment. The summit was only a short ways away, but things got tricky. After a spice 4th class downclimb into the next notch, I went down and north along the east face, which at this point was composed of rotten black rock, sometimes held together by mud. Climbing slowly and carefully, I eventually reached more solid golden granite for a short, relaxing climb to Disappointment.

From there, I retraced my steps perhaps 100 feet down the east side to dodge the serrated ridgeline, then began a fun climb along ledges and across ribs toward Middle Palisade. Though I stayed mostly on the east side, I met the ridge at one point to bypass a small tooth to the west. The crux was a short, overhanging step into the last major notch on the ridge, which could perhaps have been avoided by dropping down another 100 feet. I returned to the ridge near where the Farquhar route reaches it from the west, and reached the summit at 11:40, about 40 minutes from Disappointment.

With much trail running, the familiar descent took a little over two hours, despite my stupidly cutting straight left toward the snow as soon as I reached the rock rib separating the glacier’s two lobes, and incurring another loose 4th class downclimb. 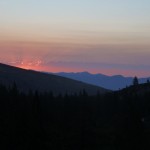 Sunrise on the South Fork 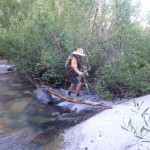 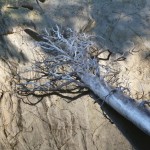 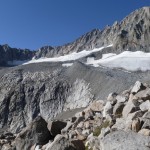 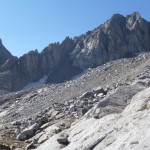 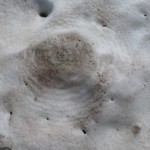 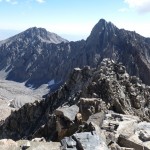 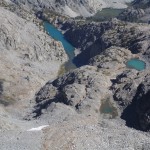 South Fork lakes from above 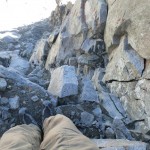 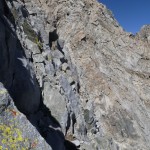 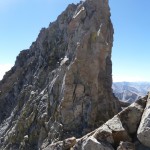 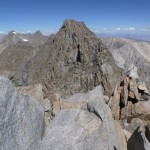 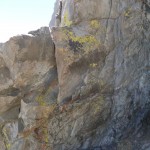 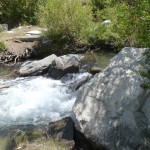