For an easy day, I headed back to Yankee Boy Basin to tag Teakettle and Potosi, two cool-looking piles of horrendous rock near Mount Sneffels. “Coffeepot” is a bump on the ridge between them. Teakettle and “Coffeepot” are noted for having 5th-class summit blocks, a relative rarity among Colorado peaks.

From just past the trailhead with the outhouse, the approach to Teakettle is easy grass and stable scree into the basin to its south. The right-hand side of this basin, a pile of scree with a rock window in the cliffs on top, is unfortunately where one must go. This scree is mostly large, loose, and sharp, and I had sadly failed to bring shin-guards. I took my time picking my way up the slope, then headed past the window to the black gully that passes the cliff-band. From here, I followed footprints in the loose sand to the base of the summit block. A quick bit of easy 5th-class stemming got me to the top, which is adorned with several large rap slings. I’m not sure how safe I would feel rapping off the rock up there.

I stemmed back down, retraced my route down the black gully, then headed up to the northwest side of “Coffeepot” and around to its southeast, which is split by two chimneys. The right-hand one was too narrow to climb with a pack, but perfect for chimneying. I writhed up, checked out the view, and writhed back down.

A faint trail makes the scree-slog to Potosi more bearable. At some point before rounding the peak’s south corner, one should claw up the scree and head northeast and up, finding cairns and a sort-of route. Instead, I continued following a faint trail around to the southeast ridge, and made my way up some loose stuff there to the broad, flat summit. I took the standard route back to the “trail” along the ridge, then dropped down some unpleasant scree toward the road. By heading right when reaching the grass, I mostly avoided downclimbing the gray, crumbly cliffs near the base of the peak, and came out just below the trailhead. 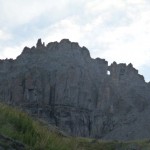 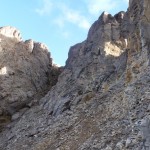 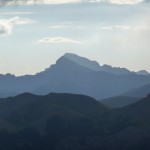 Wetterhorn and Uncompahgre in alignment 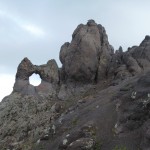 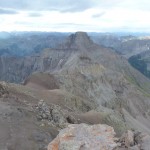 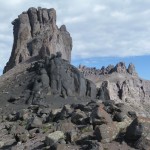 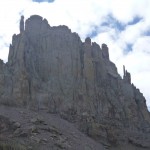 Potosi’s weird summit from the NW 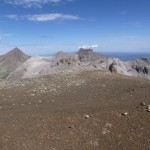 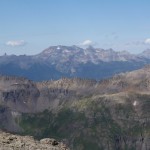