Fuller, Vermilion, Golden Horn, and Pilot Knob are high-points on the colorful, rotten rim of Ice Lakes Basin near Silverton. Though all are high 13ers, they rise from a high basin and are connected by high saddles, making them more snack-sized peaks, with Pilot Knob being the best of the lot, and my favorite of the two Pilot Knobs I have climbed. Being both scenic and accessible, the basin can be hideously crowded, but it’s worth a visit, and only a handful of visitors seem to tag the peaks.

With the weather finally improving — I woke to stars rather than rain — I started up the trail around 5:30, giving myself plenty of time to take care of business. I passed scads of tents in both the lower and upper basins, but only saw a couple people out and about. I followed a well-established trail to Fuller Lake, then headed cross-country for a switchbacking use trail I spotted leading to the Fuller-Vermilion saddle. I picked up bits of a faint trail below the saddle, leading past a stone hut and various mine debris.

The trail to the saddle was surprisingly well-worn, given that it connects to nowhere, basically, but I was surprised to see a number of use trails in the talus to the southwest, highlighted by the low-angle light. The talus on the west side of the ridge was still covered in frost and very slick, but I had no trouble following an intermittent trail to Fuller’s summit.

I retraced my steps, then continued on the corresponding use trail around Vermilion’s west side and up to its summit, finally ascending some steep mud and green rock. Although vermilion is “a brilliant red pigment made from mercury sulfide,” the peak wasn’t noticeably red to the climber’s eye.

Returning to the top of the steep mud, I carefully climbed and slid down a gully on the northeast side, raining chossy death on anyone below, to reach a bench near the saddle with Golden Horn. Though it is both golden and horn-shaped from the east, the peak is gray and nondescript from the south. I climbed some tame gray mud and talus, finding a cairn on the western summit pinnacle.

Retreating south, I found a good spot to pop over the ridge and contour around Golden Horn’s west side, popping out on the intermittently-vermilion ridge south of Pilot Knob. Making my way over, around, and in between some wacky pillars, I tried to pick out a route up Pilot Knob.

I knew it was third class, but hadn’t paid much attention to the route description, so I ended up making it more like 4th class. I started around to the left, then up through a gap south of a cairned non-summit and up to the ridge via the left side. From there, I stayed near the top, walking over and across the crazy-looking pillars. It didn’t look like it would go, but most of the scramble from the non-summit to the summit on the north end was no harder than exposed class 2.

From the summit, I found cairns for the much-easier standard route, then circled around the north end and boot-skied down scree and sand to the basin. I hiked back to the trail, crushing wildflowers along the way, then ran the rest of the way, trying not to scare the masses of hikers. 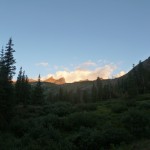 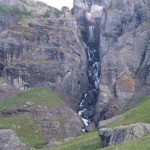 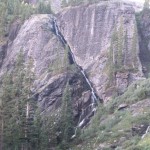 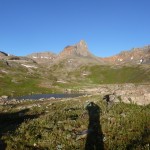 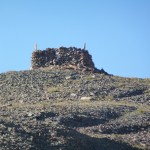 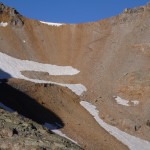 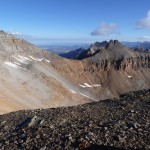 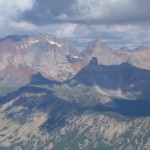 Wilsons with Lizard Head in the shade 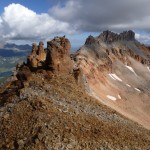 On the ridge to Pilot Knob 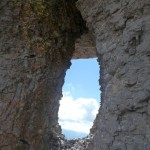 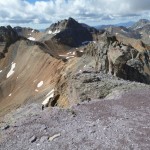 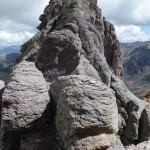 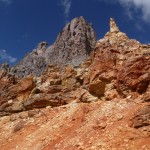 Pilot Knob from the NE 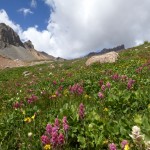 Looking back at Golden Horn 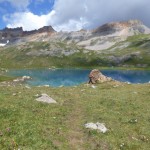